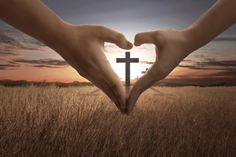 Towards the end of his gospel, these fascinating comments by the apostle John can be read: «Jesus did many other signs before his disciples, which are not written in this book ... But if one should be written down one after the other, I would say , the world can't believe the books that should be written » (John 20,30: 21,25). Based on these remarks and taking into account the differences between the four Gospels, it can be concluded that the accounts mentioned were not written as complete traces of Jesus' life. John states that his writings are intended "so that you may believe that Jesus is the Christ, the Son of God, and that by faith you may have life in his name" (John 20,31). The main focus of the Gospels is to preach the good news about the Savior and the salvation granted to him.

Although John in Salvation 31 saved (Life) associated with Jesus 'name, Christians speak of being saved by Jesus' death. This concise statement is correct so far, but just referring salvation to Jesus' death can obscure the fullness of who he is and what he did for our salvation. The events of Holy Week remind us that Jesus' death - however crucial it is - should be seen in a broader context, which includes the Incarnation of our Lord, his death, resurrection and ascension. They are all essential, inextricably linked milestones of his work of salvation - the work that gives us life in his name. So, during Holy Week, as well as throughout the rest of the year, we want to see the perfect work of salvation in Jesus.

Jesus' birth was not the ordinary birth of an ordinary person. Being unique in every way, it embodies the beginning of the incarnation of God Himself. With Jesus' birth, God came to us in the same way as man has been born since Adam. Although he remained what he was, the eternal Son of God took on human life in its full extent - from beginning to end, from birth to death. As a person, he is totally God and human. In this overwhelming statement we find an eternally valid meaning, which deserves an equally eternal appreciation.

With his incarnation, the eternal Son of God came out of eternity and as a human being out of flesh and blood into his creation, which was dominated by time and space. "And the Word became flesh and dwelt among us, and we saw his glory, a glory as the only begotten son of the Father, full of grace and truth" (John 1,14). Jesus was indeed a true human being in all his humanity, but at the same time he was totally God - like the Father and the Holy Spirit. His birth fulfills many prophecies and embodies the promise of our salvation.

Incarnation did not end with the birth of Jesus - it continued beyond his entire earthly life and is now being further realized with his glorified human life. The incarnated (ie, incarnated) Son of God remains essentially the same with the Father and the Holy Spirit - his divine nature is fully present and omnipotent, which gives his life as a human being a unique meaning. Thus says in Romans 8,3: 4: "For what was impossible for the law because it was weakened by the flesh, God did: He sent his son in the form of the sinful flesh and for the sake of sin and condemned the sin in the flesh, so that justice demanded by the law would be fulfilled in us, who we now live not according to the flesh, but according to the spirit ”- Paul further explains that“ we will be saved by his life ” (Romans 5,10).

Jesus' life and ministry are inextricably interwoven - both are part of the incarnation. The God-Man Jesus is the perfect High Priest and mediator between God and men. He took part in human nature and did justice to humanity by leading a sinless life. This circumstance allows us to understand how he can cultivate a relationship, both with God and with men. While we usually celebrate his birth at Christmas, the events of his whole life are always part of our all-out praise - even in Holy Week. His life reveals the relationship character of our salvation. Jesus, in the form of Himself, brought together God and humanity in a perfect relationship.

Some mislead the short message that we were saved by Jesus' death, the misguided misperception that his death was a sacrifice of atonement that led God to grace. I pray that we all recognize the fallacy of this thought.

TF Torrance writes that in Jesus' death, given the right understanding of the Old Testament sacrifice, we do not recognize a pagan offering for forgiveness, but the powerful testimony of the will of a gracious God (Atonement: The Person and Work of Christ, p. 38-39). Pagan sacrificial rites were based on the principle of retribution, while Israel's sacrificial system was based on the principle of forgiveness and reconciliation. Instead of earning forgiveness through sacrificial offerings, the Israelites saw themselves empowered by God to be acquitted of their sins and to be reconciled with him.

Israel's offerings were designed to testify and reveal God's love and grace by pointing to the destiny of Jesus' death, which is given in the reconciliation with the Father. With his death, our Lord also defeated Satan and took the power of death himself: "Because the children are now flesh and blood, he also accepted it equally, so that by his death he would take away the power that had authority over death, namely the devil, and redeemed the one who, through fear of death, had to be servants in all life » (Hebrews 2,14: 15). Paul added that Jesus "must rule until God puts all enemies under his feet". The last enemy to be destroyed is death » (1 Corinthians 15,25: 26). Jesus' death manifests the atoning aspect of our salvation.

On Easter Sunday, we celebrate Jesus' resurrection, which fulfills many Old Testament prophecies. The letter to the Hebrews points out that Isaac's salvation before death reflects the resurrection (Hebrews 11,18: 19). From the book of Jonah we learn that it was "three days and three nights" in the body of the big fish (Jon 2, 1). Jesus referred to that event regarding his death, burial, and resurrection (Matthew 12,39-40); Matthew 16,4: 21 and 2,18; John 22).

We celebrate Jesus' resurrection with great joy because it reminds us that death is not final. Rather, it represents an intermediate step on our way into the future - eternal life in communion with God. At Easter we celebrate Jesus' victory over death and the new life we ​​will have in him. We look forward with joy to the time of which Revelation 21,4 speaks: «[...] and God will wipe away all tears from their eyes, and death will no longer be, nor suffering, cries, or pain will be more; because the first has passed. » The resurrection stands for the hope of our salvation.

Jesus' birth led to his life and his life to his death. However, we can not separate His death from His resurrection, nor His resurrection from His ascension. He did not emerge from the grave to lead a life in human form. In glorious human nature he ascended to the Father in heaven, and only with that great event did the work begun by him end.

In the introduction to Torrances' book Atonement, Robert Walker wrote: "With the resurrection, Jesus absorbs our essence as human beings and leads them to the presence of God in unity and community of Trinitarian love." CS Lewis put it this way: "In Christian history, God descends and then starts up again." The wonderful good news is that Jesus lifted us up with himself. «... and he has raised us up with and put us in heaven in Christ Jesus, so that in the coming times he will show the exuberant wealth of his grace through his goodness towards us in Christ Jesus» (Ephesians 2,6: 7).

Incarnation, death, resurrection and ascension - they are all part of our salvation and thus our praise in Holy Week. These milestones point to everything that Jesus has accomplished for us with all his life and ministry. Let us see more and more, who he is and what he has done for us, all year long. He represents the perfect work of salvation.