The Gospel - God's declaration of love to us 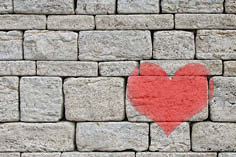 Many Christians are not sure and worried about it, God still loves them? They are worried that God might reject them, and worse, that he has already rejected them. Maybe you are the same scared. Why do you think Christians are so worried? The answer is simply that they are honest with themselves. They know that they are sinners. They are painfully aware of their failures, their mistakes, their transgressions - their sins. They have been taught that God's love and even salvation depends on how well they obey God. So they keep telling God how sorry they are and begging for forgiveness in the hope that God will forgive them and not turn their backs when they somehow create a deep, inner sense of concern.

It reminds me of Hamlet, a play by Shakespeare. In this story, Prince Hamlet has learned that his uncle Klaudius killed Hamlet's father and married his mother to seize the throne. Therefore, Hamlet secretly plans to kill his uncle / stepfather in an act of revenge. The perfect opportunity arises, but the king is praying, so Hamlet postpones the attack. If I kill him during his confession, he will go to heaven, Hamlet concludes. If I wait and kill him after he has sinned again, but before he announces it, then he will go to hell. Many people share Hamlet's ideas about God and human sin.

When they came to believe, they were told that if and until they did not repent and believe, they would be completely separate from God and the blood of Christ would not and could not work for them. Belief in this mistake led them to make another mistake: every time they fell back into sin, God would deprive them of their grace and the blood of Christ would no longer cover them. That is why, when people are honest about their sinfulness, they wonder throughout their Christian life whether God has rejected them. None of this is good news. But the gospel is good news. The gospel does not tell us that we are separated from God and that we have to do something so that God can grant us His grace. The gospel tells us that God the Father in Christ all things including you and me including all people (Colossians 1,19: 20) reconciled.

There is no barrier, no separation between man and God, because Jesus tore it down and because he, in his own being, pulled mankind into the love of the Father (1 John 2,1; John 12,32). The only barrier is an imaginary (Colossians 1,21) that we humans have erected through our own selfishness, fear and independence. The gospel is not about doing or believing something that causes God to change our status from unloved to loved.

God's love doesn't depend on anything we do or don't do. The gospel is an explanation of what is already true - an explanation of the father's unyielding love for all of humanity, which was revealed in Jesus Christ by the Holy Spirit. God loved you before you ever regretted or believed anything, and nothing you or anyone else will do will change that (Romans 5,8:8,31; 39).

The gospel is about a relationship, a relationship with God that became reality for us through God's own action in Christ. It's not about a set of requirements, nor about a mere intellectual acceptance of a series of religious or biblical facts. Jesus Christ not only stood by us at the judgment seat of God; he drew us into himself and made us with him and in him through the Holy Spirit to God's own beloved children.

It is none other than Jesus, our Redeemer, who accepted all our sins, who, through the Holy Spirit, works in us to do and accomplish according to his well-being (Philippians 4,13:2,8; Ephesians 10). We can give ourselves wholeheartedly to follow him, knowing that if we fail, he will have forgiven us. Think about it! God is not a deity who watches us far away, out there in heaven, but Father, Son and Holy Spirit, in whom you and everyone else live, weave and are (Acts 17,28). He loves you so much, regardless of who you are or what you did, that in Christ, the Son of God, who came into human flesh - and comes into our flesh through the Holy Spirit - your estrangement, your fears, Your sins were taken away and you healed by his saving grace. He removed every barrier between you and him.

In Christ you are rid of everything that ever prevented you from directly experiencing the joy and calm that comes from living a life of intimate fellowship, friendship, and perfect, loving fatherhood. What a wonderful message God has given us to share with others!

The Gospel - God's declaration of love to us