What is the big mission command? 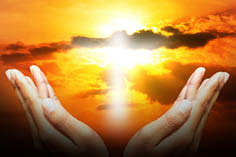 The words of Jesus to his followers after his resurrection

The expression "the great mission command" usually refers to Jesus' words in Matthew 28,18: 20: "And Jesus came up and said to them: All authority in heaven and on earth has been given to me. Therefore go and make disciples of all nations: baptize them in the name of the Father and the Son and the Holy Spirit and teach them to keep all that I have commanded you. And behold, I am with you every day until the end of the world. »

All power is given to me in heaven and on earth

Jesus is "Lord of All" (Acts 10,36) and he is the first in everything (Colossians 1,18 f.). If churches and believers participate in mission or evangelism, or whatever the term is, and do it without Jesus, then that is fruitless.

The mission of other religions does not recognize his supremacy and therefore they are not doing God's work. Any branch of Christianity that does not put Christ first in its practices and teachings is not the work of God. Before Ascension to Heavenly Father, Jesus made the prediction: "... you will receive the power of the Holy Spirit who will come upon you and you will be my witnesses" (Acts 1,8). The work of the Holy Spirit in the mission is to lead believers to testify for Jesus Christ.

In Christian circles, “mission” has acquired a variety of meanings. Sometimes it referred to a building, sometimes to a spiritual mission in a foreign country, sometimes to the founding of new churches, etc. In church history, "mission" was a theological concept of how God sent his son, and how the father and the son sent the Holy Spirit.
The English word "mission" has a Latin root. It comes from «missio», which means «I send». Therefore, mission refers to the work to which someone or a group is sent.
The concept of "sending" is essential for a biblical theology of the nature of God. God is the God who sends out.

«Who should I send? Who wants to be our messenger? ” asks the voice of the Lord. God sent Moses to Pharaoh, Elijah and the other prophets to Israel, John the Baptist, to bear witness to the light of Christ (John 1,6-7), who himself was sent by the "living father" for the salvation of the world (John 4,34: 6,57).

Jesus also sent out his disciples (Matthew 10,5), and he explained that just as the Father sent him into the world, he sends Jesus, the believers, into the world (John 17,18). All believers are sent by Christ. We are on a mission for God and as such we are His missionaries. The New Testament Church understood this clearly and carried out the Father's work as his messenger. Acts is a testimony to missionary work as the gospel spread across the then known world. Believers Are As "Ambassadors For Christ" (2 Corinthians 5,20) to represent him before all peoples.

The New Testament Church was the Church on Mission. One of the problems in today's church is that churchgoers "see mission as one of its many functions rather than its defining center" (Murray, 2004: 135). They often distance themselves from missions by delegating this task to “specialized bodies instead of equipping all members as missionaries” (ebnda). Instead of Isaiah's answer "Here I am, send me" (Isaiah 6,9) the often unspoken answer is: «Here I am! Send someone else. »

The work of God in the Old Testament is linked to the idea of ​​attraction. Other peoples would be so startled by the magnetic event of God's intervention that they sought to "taste and see how kind the Lord is" (Psalm 34,8).

The model includes the call "Come", as it is shown in the story of Solomon and the Queen of Sheba. "And when the Queen of Sheba heard of Solomon, she came ... to Jerusalem ... And Solomon answered everything, and there was nothing hidden from the king that he could not have told her ... and said to the king: It is true what I have heard of your deeds and wisdom in my country » (1 Kings 10,1: 7). The main concept in this report is to draw people to a central point so that the truth and answers can be explained. Some churches today practice such a model. It is partly valid, but it is not a complete model.

Usually Israel is not sent outside its own borders to testify to God's glory. "It was not the task of going to the nations and preaching the revealed truth that was entrusted to God's people" (Peters 1972: 21). When God sends Jonah a message from the buses to the non-Israelite residents of Nineveh, Jonah is horrified. Such an approach is unique (Read the story of this mission in the Book of Jonah. It remains instructive for us today).

“This is the beginning of the gospel of Jesus Christ, the Son of God” - this is how Markus, the first author of the gospel, establishes the context of the New Testament church (Mark 1,1). It's all about the gospel, the good news, and Christians should have "fellowship in the gospel." (Philippians 1,5) means that they live and share the good news of salvation in Christ. The term "gospel" is rooted in it - the idea of ​​spreading the good news, proclaiming salvation to the unbelievers.

Just as some were sometimes attracted to Israel for their short-lived fame, so many were drawn to Jesus Christ for their popular fame and charisma. «And the news of him soon spread across the whole of the Galilean country (Mark 1,28). Jesus said: "come to me" (Matthew 11,28), and "Follow me!" (Matthew 9,9). The salvation model of coming and following is still in force. It is Jesus who has words of life (John 6,68).

Mark explains that Jesus "came to Galilee and preached the gospel of the kingdom of God" (Mark 1,14). The kingdom of God is not exclusive. Jesus told his disciples that “the kingdom of God is like a mustard seed that a man took and sowed in his garden; and it grew and became a tree, and the birds of the sky dwelt in its branches » (Luke 13,18: 19). The idea is that the tree is big enough for all birds, not just one species.

The Church is not exclusive, as was the assembly in Israel. It is inclusive and the gospel message is not just for us. We should be his witnesses "to the end of the earth" (Acts 1,8). "God sent His Son" for us so that we can be adopted as His children through redemption (Galatians 4,4). The redeeming mercy of God through Christ is not only for us alone, "but for the whole world" (1 John 2,2). We who are children of God are sent into the world as witnesses of His grace. Mission means that God says "Yes" to humanity, "Yes, I am there and yes, I want to save you."

This sending out into the world is not just a task to be accomplished. It is a relationship with Jesus that sends us to share "the goodness of God that leads to repentance" with others (Romans 2,4). It is Christ's compassionate love of agape in us that motivates us to share the gospel of love with others. «The love of Christ urges us» (2 Corinthians 5,14). Mission starts at home. Everything we do is connected to the deed of God who "sent the Spirit into our hearts" (Galatians 4,6). We are sent from God to our spouses, our families, our parents, friends, neighbors, work colleagues, and those we meet on the street, to everyone everywhere.

The early church saw its purpose in participating in the Great Order. Paul regarded those who are without the "word of the cross" as people who will be lost if the gospel is not preached to them (1 Corinthians 1,18). Regardless of whether people respond to the gospel or not, believers should be the "fragrance of Christ" wherever they go (2 Corinthians 2,15). Paul is so concerned that people hear the gospel that he considers its spread a responsibility. He says: «For I cannot praise the fact that I preach the gospel; because I have to do it. And woe to me if I don't preach the gospel! » (1 Corinthians 9,16). He suggests that he is "debtor to the Greeks and non-Greeks, the wise and the non-wise ... to preach the gospel" (Romans 1,14-15).

Paul has the desire to do the work of Christ out of a hopeful gratitude, "because God's love is poured out into our hearts through the Holy Spirit" (Romans 5,5). For him it is a privilege of grace to be an apostle, that is, one who is "sent" as we are to do the work of Christ. "Christianity is missionary in nature or denies its raison d'etre", that is, its whole purpose (Bosch 1991, 2000: 9).

Like many societies today, the world was hostile to the gospel at the time of Acts. "But we preach crucified Christ, annoyance to the Jews, foolishness to the Gentiles" (1 Corinthians 1,23).

The Christian message was not welcome. The faithful, like Paul, "were hard pressed from all sides, but without fear ... they were afraid, but they did not give up ... they were persecuted but not abandoned" (2 Corinthians 4,8: 9). Sometimes whole groups of believers have turned their backs on the gospel (2 Timothy 1,15).

It was not easy to be sent out into the world. Usually Christians and churches existed somewhere "between danger and opportunity" (Bosch 1991, 2000: 1).
By recognizing and seizing opportunities, the Church began to grow in numbers and spiritual maturity. She was not afraid to be provocative.

The Holy Spirit led believers in opportunities for the gospel. Starting with Peter's sermon in Acts 2, the Spirit seized opportunities for Christ. These are compared to doors for faith (Acts 14,27:1; 16,9 Corinthians 4,3; Colossians).

Men and women began to spread the gospel boldly. People like Philip in Acts 8 and Paul, Silas, Timothy, Aquila, and Priszilla in Acts 18 when they founded the church in Corinth. Whatever the believers did, they did it as "gospel collaborators" (Philippians 4,3).

Just as Jesus was sent to become one of us so that people could be saved, believers were sent for the gospel to “become everything” to share the good news with the whole world (1 Corinthians 9,22).

The book of Acts ends with how Paul fulfills the great missionary order of Matthew 28: "He preached the kingdom of God and taught the Lord Jesus Christ unhinderedly" (Acts 28,31). It is an example of the church of the future - a church on a mission.

The great mission command is to continue the proclamation of the gospel of Christ. We are all sent into the world by Him, just as Christ was sent by the Father. This indicates a church full of active believers who are doing the business of the Father.