What is the New Covenant? 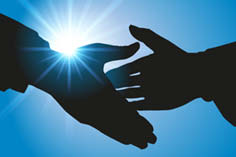 In its basic form, a covenant regulates a mutual relationship between God and humanity in the same way that a normal covenant or agreement involves a relationship between two or more people. The New Covenant is in effect because Jesus the testator died. Understanding this is crucial for the believer because the reconciliation we have received is only possible through "His blood on the cross", the blood of the New Covenant, the blood of Jesus our Lord (Colossians 1,20).

Whose idea is it?

It is important to understand that the New Covenant is God's idea and that it is not a concept that has been conceived by humans. Christ declared to his disciples when he instituted the Lord's Supper: "This is my blood of the new covenant" (Mark 14,24:26,28; Matthew). This is the blood of the Eternal Covenant » (Hebrews 13,20).

The Old Covenant prophets foretold the coming of this covenant. Isaiah describes God's words "to the one who is despised by men and loathed by the Gentiles, to the servant who is under tyrants ... I have protected you and made you a covenant for the people" (Isaiah 49,7-8; see also Isaiah 42,6). This is a clear reference to the Messiah, Jesus Christ. Through Isaiah God also predicted: "I will give them the reward in faithfulness and make an eternal covenant with them" (Isaiah 61,8).

Jeremiah also spoke of it: "Behold the time is coming, says the Lord, I will make a new covenant" that "was not like the covenant that I made with her fathers when I took her by the hand to lead them out of Egypt » (Jeremiah 31,31-32). This is again referred to as the “everlasting covenant” (Jeremiah 32,40).

Ezekiel emphasizes the reconciling nature of this covenant. He notes in the famous chapter of the Bible about the "withered bones": "And I want to make a covenant of peace with them, it should be an eternal covenant with them" (Ezekiel 37,26).

This is unique in religions because in ancient cultures gods usually do not have meaningful relationships with men or women. Jeremiah 32,38 refers to the intimate nature of this covenant relationship: "They should be my people and I want to be their God".

Frets have been and are used in business and legal transactions. At the time of the Old Testament, both Israelite and pagan practices included ratifying human cages with a blood sacrifice or lesser ritual of any kind to emphasize the bond and the first status of the covenant. Today, we see a lasting example of this notion when people solemnly exchange rings to express their commitment to marriage. Under the influence of their society, Biblical characters used various practices to physically solemnly seal their covenant relationship with God.

"It is clear that the idea of ​​a covenant relationship was by no means alien to the Israelites, so it is not surprising that God used this form of relationship to express his relationship with his people" (Golding 2004: 75).

God's covenant between himself and mankind is comparable to those agreements that are made in society, but it is not of the same rank. The new covenant lacks the concept of negotiation and exchange. In addition, God and man are not equal beings. «The divine covenant goes beyond its earthly analogy» (Golding, 2004: 74).

Most ancient frets had a reciprocal quality. For example, desired behavior is rewarded with blessings, and so on. There is an element of reciprocity expressed in terms of agreed terms.

One type of federal government is a federal government grant. In it, a higher power, such as a king, grants undeserved favor to his subjects. This type of covenant is most comparable to the new covenant. God grants humanity His grace without preconditions. Indeed, the reconciliation made possible by the bloodshed of this eternal covenant happened without God counting human transgressions (1 Corinthians 5,19). Without any action or thought of repentance on our part, Christ died for us (Romans 5,8). Grace precedes Christian behavior.

What about the other Biblical frets?

Most Bible scholars identify at least four other frets in addition to the New Covenant. These are God's covenants with Noah, Abraham, Moses and David.
In his letter to the Gentile Christians in Ephesus, Paul explained to them that they were "strangers outside the covenant of promise", but in Christ they were now "who were once distant, near by the blood of Christ" (Ephesians 2,12: 13), ie through the blood of the New Covenant, which enables reconciliation for all people.

The covenants with Noah, Abraham and David contain all unconditional promises that find their direct fulfillment in Jesus Christ.

Paul declares that Christ is the promised seed of Abraham, and therefore all believers are heirs of saving grace (Galatians 3,15: 18). "But if you belong to Christ, you are Abraham's children and heirs according to the promise" (Galatians 3,29). Federal commitments on David's line (Jeremiah 23,5: 33,20; 21) are realized in Jesus, "the root and descendant of David", the king of righteousness (Revelation 22,16).

The Mosaic Covenant, also called the Old Covenant, was conditional. The condition was that blessings would follow if the Israelites followed the codified law of Moses, especially the inheritance of the Promised Land, the vision that Christ fulfilled spiritually: «And that is why he is also the mediator of the new covenant, through his death that has been done to redeem the transgressions under the first covenant that receive the promised eternal inheritance » (Hebrews 9,15).

Historically, the frets also included signs indicating the continued involvement of each of the two parties. These signs also refer to the New Covenant. The sign of the covenant with Noah and creation was, for example, the rainbow, a colorful distribution of light. It is Christ who is the light of the world (John 8,12; 1,4-9).

The sign of Abraham was circumcision (Genesis 1: 17,10-11). This is linked to the consensus among scholars regarding the basic meaning of the Hebrew word berith, which translates as covenant, a term related to cutting. The term "cut a bundle" is still sometimes used. Jesus, the seed of Abraham, was circumcised according to this practice (Luke 2,21). Paul explained that circumcision is no longer physical for the believer, but spiritual. Under the new covenant, “circumcision of the heart applies that occurs in the spirit and not in the letter” (Romans 2,29:3,3; see also Philippians).

The Sabbath was also the sign given for the Mosaic Covenant (Genesis 2: 31,12-18). Christ is the calm of all our works (Matthew 11,28-30; Hebrews 4,10). This calmness is both present and present: «If Joshua had brought it to rest, God would not have spoken of another day afterwards. So there is still a rest for the people of God » (Hebrews 4,8: 9).

The New Covenant also has a sign, and it is not a rainbow or circumcision or the Sabbath. "Therefore the Lord himself will give you a sign: Behold, a virgin is pregnant and will give birth to a son, whom she will call Immanuel" (Isaiah 7,14). The first hint that we are God's people of the New Covenant is that God has come to dwell among us in the form of His Son, Jesus Christ (Matthew 1,21:1,14; John).

The New Covenant also contains a promise. "And behold," says Christ, "I will send down on you what my father promised" (Luke 24,49), and this promise was the gift of the Holy Spirit (Acts 2,33:3,14; Galatians). Believers are sealed in the New Covenant "with the Holy Spirit who is promised, which is the pledge of our inheritance" (Ephesians 1,13: 14). A true Christian is not characterized by ritual circumcision or a series of obligations, but by the indwelling of the Holy Spirit (Romans 8,9). The idea of ​​the covenant offers a breadth and depth of experience in which God's grace can be understood literally, figuratively, symbolically and through analogies.

Which frets are still in force?

All the aforementioned frets are summarized in the glory of the eternal New Covenant. Paul illustrates this when he compares the Mosaic Covenant, also known as the Old Covenant, with the New Covenant.
Paul describes the Mosaic Covenant as the "office that brings death and that was carved with letters in stone" (2 Corinthians 3,7: 2; see also Exodus 34,27: 28), and says that even though he was once glorious, "there is no need to look for glory in relation to this exuberant glory", a reference to the office of Spirit, in other words, the New Covenant (2 Corinthians 3,10). Christ is "greater honor than Moses" (Hebrews 3,3).

The Greek word for covenant, diatheke, gives fresh meaning to this discussion. It adds the dimension of an agreement, which is a last will or testament. In the Old Testament, the word berith was not used in this sense.

The author of the letter to the Hebrews uses this Greek distinction. Both the Mosaic and the New Covenant are like wills. The Mosaic Covenant is the first will, which is canceled when the second is written. "He picks up the first one so that he can use the second one" (Hebrews 10,9). "Because if the first covenant had been blameless, space would not be sought for another" (Hebrews 8,7). The New Covenant “was not like the covenant I made with your fathers” (Hebrews 8,9).

Therefore Christ is the mediator of a "better covenant based on better promises" (Hebrews 8,6). When someone writes a new will, all previous wills and their conditions, no matter how glorious they were, lose their effect, they are no longer binding and useless to their heirs. «By saying:« a new covenant », he declares the first to be out of date. But what is out of date and surviving is nearing its end » (Hebrews 8,13). Therefore, the forms of the old cannot be required as a condition for participation in the new covenant (Anderson 2007: 33).

Of course: «Because where there is a will there must have been the death of the person who made the will. Because a will only comes into force with death; it is not yet in force while the one who made it is still alive » (Hebrews 9,16: 17). To this end, Christ died and we receive sanctification through the Spirit. «According to this will we are sanctified once and for all by the sacrifice of the body of Jesus Christ» (Hebrews 10,10).

The regulation of the sacrificial system in the Mosaic Covenant has no effect, «because it is impossible to take away sins through the blood of bulls and goats» (Hebrews 10,4), and anyway the first will was canceled so that he could use the second (Hebrews 10,9).

Whoever wrote the letter to the Hebrews was very concerned that his or her readers understood the serious meaning of the New Testament teaching. Do you remember how it was in the Old Covenant when it came to those who rejected Moses? «If anyone breaks the law of Moses, he must die without mercy on two or three witnesses» (Hebrews 10,28).

"How much tougher a punishment, you think, will deserve if he tramples the Son of God and considers the blood of the covenant to be unclean, by which he was sanctified, and reviles the spirit of grace" (Hebrews 10,29)?

The New Covenant is in effect because Jesus the testator died. Understanding this is crucial for the believer because the reconciliation we have received is only possible through "his blood on the cross", the blood of the New Covenant, the blood of Jesus our Lord (Colossians 1,20).