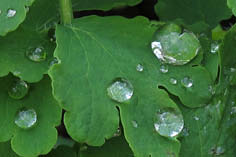 "I'll park my car with you," Tom said to the shopkeeper. "If I am not back in eight weeks, I will probably not be alive." The shopkeeper looked at him as if he had a madman in front of him. «Eight weeks? You won't survive that for two weeks! » Tom Brown jun. is a passionate adventurer. His goal was to find out if he could hold out in the Death Valley desert - the deepest, driest area in North America and the hottest in the world - for so long. He later wrote that the circumstances in the desert demanded more from him than he had ever experienced. He had never been so thirsty in his life. Its main source of drinking water was dew. Every night he set up a device to catch the dew, so he had collected enough fresh water to drink in the morning. Soon Tom lost the calendar orientation and after nine weeks he decided it was time to go home. He reached his goal, but admits that he wouldn't have survived without the presence of dew.

How often do you think of dew? If they feel like me, not too often - unless you have to wipe the dew off your windshield in the morning! But dew is more than the precipitation on our car windows (or something that causes chaos on the cricket field)! He is a life giver. It refreshes, quenches thirst and invigorates. He turns fields into works of art.

During the summer holidays I spent many days with my family on a farm. Often we got up early and my father and I went hunting. I have never forgotten the freshness of the morning when the first rays of sunlight brought the dewdrops on the trees, grasses and plants like diamonds to glitter and sparkle. Spider web threads looked like jewel necklaces and the withered flowers of the previous day seemed to dance with new energy in the morning light.

I didn't care about dew until I was recently stimulated to think by the words of Proverbs 19,12. “The king's disgrace is like the roar of a lion; but his grace is like dew on the grass. »

What was my first reaction? 'This saying doesn't concern me. I am not a king and I do not live under a king. ” After thinking about something, something else came to my mind. It is not difficult to understand how to compare a king's disgrace or anger with a lion's roar. To draw people's anger (especially that of authority figures) can be scary - not unlike an encounter with an angry lion. But what about grace like dew on the grass? In the writings of the prophet Micah we read of certain people who had shown themselves to be faithful to God. They will be "like dew from the Lord, like rain on the grass" (Wed 5,6).

Their influence among the people around them was refreshing and refreshing, like the effects of dew and rain on the vegetation. Likewise, you and I are God's dew in the lives of those we are in contact with. Just as a plant absorbs life-giving dew through its leaves - and makes them bloom - we are God's method of bringing divine life into the world (1 John 4,17). God is the source of dew (Hosea 14,6) and he chose you and me as distributors.

How can we be God's dew in other people's lives? An alternative translation from Proverbs 19,12 helps: "An angry king is as scary as a roaring lion, but his kindness is like the dew on the grass" (NCV). Kind words can be like drops of dew that cling to people and give life (Ex 5 32,2). Sometimes it only takes a little help, a smile, a hug, a touch, a thumbs-up or a nod in agreement to refresh and revitalize someone. We can also pray for others and share with them the hope we have for them. We are God's tools of His presence at work, in our families, in our churches - and in play. My friend Jack recently told me the following story:

“It's been about three years since I joined our local bowling club. Most players arrive at 13 p.m. and the game starts about 40 minutes later. During this transition period, the players sat together and talked, but during the first few years I decided to stay in my car and do some Bible study. As soon as the players took their balls, I wanted to get in there and go to the bowling green. A few months ago I decided to do something for the club instead of studying. I looked for a field of activity and found a job in the counter area. Dozens of glasses had to be taken out of the sink and placed in the hatch; water, ice and cold drinks as well as beer are provided in the club room. It took a good half an hour, but I really enjoyed the job. Bowling greens are places where you can make or end a friendship. To my regret, a gentleman and I crashed our heads, so we kept our distance afterwards. Anyway, you can imagine how much I was surprised and, above all, very happy when he came up to me and said: 'The fact that you are here makes a big difference for the club!' ”

It can be that simple and yet so significant. Like the morning dew on our lawn. We can quietly and kindly make a difference in the lives of those we have contact with. Never underestimate the impact you make. On Pentecost, the Holy Spirit fulfilled 120 believers. They were just ordinary people like you and me, and yet they were the same people who later "turned the world upside down". Less than two hundred drops of dew dampened the whole world.

There is another perspective of this saying. If you are in an authority position, then you should consider what your words and actions trigger on your subordinates. An employer should be kind, friendly and fair (Proverbs 20,28). A husband should never treat his wife roughly (Colossians 3,19) and parents should avoid discouraging their children by being overcritical or bossy (Colossians 3,21). Instead, be like the dew - thirst-quenching and refreshing. Let the beauty of God's love be reflected in your lifestyle.

A thought at the end. Tau fulfills its purpose - refreshes, beautifies and donates life. But a dewdrop does not sweat trying to become one! You are God's Dew by simply being in Jesus Christ. This is not about projects and strategies. It's spontaneous, it's natural. The Holy Spirit creates the life of Jesus in our lives. Pray for his life to flow through you. Just be yourself - a small drop of dew.

The mines of King Solomon (Part 21)