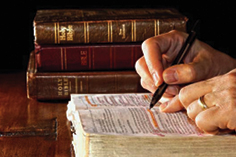 Matthew 9, like most of the other chapters of the Gospel of Matthew, reports on various events in the life of Christ. This is not just a disorderly collection of reports - Matthew sometimes adds history to history because it is a wonderful complement. By means of physical examples spiritual truths are shown. In chapter 9, Matthew has summarized a number of stories that can also be found in the Gospel of Mark and Luke - but the teachings of Matthew are much shorter and more concise.

The authority to forgive sins

When Jesus returned to Capernaum, «they brought [a couple of men] to him a paralytic who was lying on a bed. When Jesus saw their faith, he said to the paralyzed one: Be confident, my son, your sins are forgiven » (V 2). The men had brought him to Jesus in faith so that he could heal him. Jesus devoted himself to the paralyzed because his greatest problem was not his paralysis but his sins. Jesus was the first to take care of it.

"And behold, some of the scribes said to themselves: This blasphemes God" (V 3). They thought only God could forgive sins, Jesus took too much.

"But when Jesus saw their thoughts, he said: Why do you think evil in your heart? What is easier to say: your sins are forgiven, or to say: get up and walk around? But so that you know that the Son of Man has authority to forgive sins on earth - he said to the paralyzed man: Get up, get your bed and go home! And he got up and went home » (V 5-6). It is easy to talk about divine forgiveness, but it is difficult to prove that it has really been granted. So Jesus performed a miracle of healing to show that he had the authority to forgive sins. His mission on earth was not to cure everyone of their physical illnesses; he didn't even heal all the sick in Judea. His main mission was to announce the forgiveness of sins - and that he was the source of forgiveness. This miracle was not meant to proclaim physical healings, but more importantly, spiritual healing. "When the people saw this, they feared and praised God" (V 8) - but not everyone was happy about it.

After this incident, he saw [Jesus] a man sitting at customs, his name was Matthew; and he said to him, Follow me! And he got up and followed him » (V 9). The fact that Matthew was at customs indicates that he raised the customs duties from people who transported goods through an area - perhaps even from fishermen who brought their catch into town to sell it. He was a customs officer, a toll cashier and a "robber" commissioned by the Romans. And yet he left his lucrative job to follow Jesus and the first thing he did was to invite Jesus to a feast with his friends.

"And it happened when he was sitting at the table in the house, behold, many tax collectors and sinners came and sat at the table with Jesus and his disciples" (V 10). It would be comparable to a pastor who would go to a party in a chic mafia villa.

The Pharisees observe the type of society that Jesus was in, but did not want to directly address him. Instead, they asked his disciples, "Why does your master eat with tax collectors and sinners?" (V 11b). The disciples may have looked at each other in astonishment and finally Jesus answered: "The strong do not need the doctor, but the sick". But go and learn what that means (Hosea 6,6): "I like mercy and not sacrifice." «I have come to call sinners and not the righteous» (V 12). He had the authority to forgive - spiritual healing also took place here.

Just as a doctor works for the sick, so Jesus stood up for the sinners because they were the ones he came to help. (Everyone is a sinner, but that is not what Jesus is concerned with.) He called people to be holy, but he did not ask them to be perfect before calling them. Because we have grace so much more necessary than judgment, God wants us to exercise more grace than judging others. Even if we do everything God commands (e.g. sacrificing), but failing to show mercy towards others, then we failed.

The old and the new

The Pharisees were not the only ones to wonder about Jesus' ministry. The disciples of John the Baptist asked Jesus the question: "Why do we and the Pharisees fast so much and your disciples do not fast?" (V 14). They fasted because they suffered from the nation's distance from God.

Jesus replied: «How can the wedding guests suffer as long as the groom is with them? But the time will come when the groom will be taken from them; then they will fast » (V 15). There is no reason as long as I am here, he said - but he indicated that he would eventually - forcibly - be "taken from them" - then his disciples would suffer and fast.

Then Jesus gave them an enigmatic saying: "Nobody patches an old dress with a rag of a new cloth; because the rag tears off the dress again and the tear becomes worse. You don't put new wine in old bottles either; otherwise the hoses will tear and the wine will spill and spoil the hoses. But if you fill new wine into new bottles, both are preserved together » (V 16-17). Jesus certainly did not come to "mend" the Pharisees' instructions on how to live a godly life. He did not try to add mercy to the sacrifices prescribed by the Pharisees; neither did he try to introduce new ideas into the existing rules. Rather, he started something completely new. We call it the New Covenant.

Raising the dead, healing the impure

"When he spoke to them, behold, one of the leaders of the community came and fell down before him and said, My daughter has just died, but come and put your hand on her, she will come to life" (V 18). Here we are dealing with a very unusual religious leader - one who trusted Jesus completely. Jesus went with him and raised the girl from the dead (V 25).

But before he got to the girl's house, another person approached him to be healed: "And behold, a woman who has had blood flow for twelve years approached him from behind and touched the hem of his robe. For she said to herself: If I could only touch his robe, I would be well. Then Jesus turned and saw her and said, Be confident, my daughter, your faith has helped you. And the woman got well at the same hour » (V 20-22). The woman was impure because of her blood flow. The law of Moses did not allow anyone to touch her. Jesus had a new way of doing things. Instead of avoiding her, he healed her when she touched him. Matthew sums it up: Faith had helped her.

Faith had caused the men to bring their paralyzed friend to him. Faith motivated Matthew to quit his job. Faith led a religious leader to ask for his daughter's resurrection, a woman to have her blood flow healed, and that blind people asked to see Jesus (V 29). There was all kinds of suffering, but one source of healing: Jesus.

The spiritual meaning is clear: Jesus forgives sins, gives new life and a new direction in life. He makes us clean and helps us to see. This new wine was not poured into the old rules of Moses - for a separate work has been created. The mission of grace is central to the ministry of Jesus.