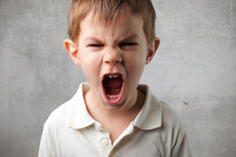 A few years ago I was in Harare, Zimbabwe to give church lectures. After I stayed in my hotel, I took an afternoon stroll through the streets of the bustling capital. One of the buildings in the city center caught my eye because of its architectural style. I took a couple of photos when I suddenly heard someone screaming: “Hey! Hey Hey you there! » When I turned around I looked directly into the eyes of a soldier who were staring angrily. He was armed with a rifle and pointed it at me with anger. Then he started thrusting my rifle against my chest and shouted at me: "This is a security area - it is forbidden to take photos here!" I was very shocked. A security area in the middle of the city? How could that happen? People stopped and stared at us. The situation was tense, but strangely, I wasn't afraid. I said calmly: «I'm sorry. I didn't know there was a security area here. I will no longer take photos. » The soldier's aggressive shouting continued, but the louder he shouted, the more I lowered my voice. I apologized again. Then something amazing happened. He also gradually lowered his volume (and his rifle!) changed his tone and listened to me instead of attacking me. After a while we had a very enjoyable conversation, which ended up showing me the way to the local bookstore!

When I left and returned to my hotel, a well-known saying kept coming to my mind: "A mild answer quenches anger" (Proverbs 15,1). It was through this bizarre incident that I experienced the dramatic effect of Solomon's wise words. I also remembered saying a specific prayer that morning, which I will share with you later.

It is not common in our culture to give a mild answer - rather it is the opposite. We are urged to "let our feelings out" and "say what we feel". The passage in Proverbs 15,1 seems to encourage us to put up with everything. But any fool can scream or insult. It takes a lot more character to meet a disgruntled person with calmness and gentleness. It's about being Christ-like in our daily life (1 John 4,17). Isn't that easier said than done? I've learned some valuable lessons (and I'm still learning!) when dealing with an angry person and using a mild answer.

Pay it back to the other with the same coin

Is not that the case when you argue with someone, then the other will try to fight back? If the opponent makes cutting comments, then we want to trim him. If he screams or yells, then we scream even louder. Everyone wants to have the last word, land one final hit or put a final blow. But if we just go back our guns and try not to prove to the other that he is wrong and not aggressive, then the other often calms down quickly. Many disputes can become even more heated or defused by the type of response we give.

I also learned that something is not always what we think when someone seems to be angry with us. The crazy driver who cut you off today did not wake up this morning with the intention of driving you off the road! He does not even know you, but he knows his wife and is mad at her. Coincidentally, you were just in the way! The intensity of this anger is often disproportionate to the significance of the event that led to its eruption. Common sense is replaced by anger, frustration, disappointment and hostility towards the wrong people. That's why we're dealing with an aggressive driver on the road, a rude cashier, or a screaming boss. They are not the ones they are mad at, so do not take their anger personally!

As man thinks in his heart, so is he

If we want to respond to a disgruntled person with a mild answer, our heart must first be right. Sooner or later, our thoughts will usually be reflected in our words and behaviors. The Book of Proverbs teaches us that "a wise man's heart is characterized by clever speeches" (Proverbs 16,23). Like a bucket of water from a well, the tongue picks up what is in the heart and pours it out. When the source is clean, it is what the tongue speaks. If it is contaminated, the tongue will speak impure. If our minds are contaminated with bitter and angry thoughts, our reflexive reaction to an angry person will be harsh, offensive and retaliatory. Make a note of the saying: «A mild answer quenches anger; but a hard word excites Grimm » (Proverbs 15,1). Internalize him. Solomon says: “Always keep them in mind and keep them in your heart. Because whoever found them, they bring life and are healing for his whole body » (Proverbs 4,21: 22 New Geneva Translation).

Whenever we encounter someone who is angry, we have a choice of how we react to them. However, we cannot try to do this on our own and act accordingly. This brings me to my prayer announced above: «Father, put your thoughts in my mind. Put your words on my tongue so that your words become my words. In your grace help me today to be like Jesus for others. » Angry people appear in our lives when we least expect it. Be prepared.