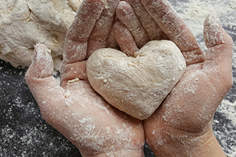 A young man came to Jesus with the question: «Teacher, what good things do I have to do to get eternal life? Honor your father and mother and love your fellow man as yourself » (Matthew 19,16:19 and Hope for All).

For most of us, Mother's Day is an opportunity to celebrate the love between a parent and her children, but for Deborah Cotton, Mother's Day will always be the story of a special kind of love. Deborah is a journalist and long-time advocate of non-violence and social assistance. She spent years of her career helping people in deprived neighborhoods in her beloved New Orleans. On Mother's Day 2013, everything changed: she was one of 20's people who were injured in a shooting during a parade. When two gang members opened the fire into the crowd of innocent onlookers, Deborah was hit in the gut; the bullet damaged several of their vital organs.

She survived thirty operations, but will carry scars forever; a reminder of the high cost of their service to the community. What would Mother's Day mean for her? She had the choice to relive the terrible memory of the day and the pain involved, or turn her tragedy into something positive through forgiveness and love. Deborah chose the path of love. She reached for the man who shot her and visited him in jail. She wanted to hear his story and understand why he was acting so horribly. Since her first visit, Deborah has helped the shooter to change his life and focus on his spiritual change in relationship with God.

When I heard about this incredible story, I couldn't help but think about the life-changing love of our own Savior. Like Deborah, he too has the scars of love, an eternal reminder of the high cost of his work to redeem mankind. The prophet Isaiah reminds us: «He was pierced because of our sins. He was punished for our sins - and we? We now have peace with God! We are healed by his wounds » (Isaiah 53,5 Hope for All).

And the amazing? Jesus did this voluntarily. He knew the pain he would suffer before he died. Instead of turning away, the sinless Son of God voluntarily took all the costs to condemn and extinguish the entire sin of humanity, to reconcile with God and deliver us from evil, eternal death. He asked his father to forgive the men who crucified him! His love knows no boundaries! It is encouraging to see signs of reconciliation and transforming love in today's world spreading through people like Deborah. She chose love instead of condemnation, forgiveness instead of retribution. On Mother's Day, we can all be inspired by her example: she relied on Jesus Christ, followed him, and ran out to do the same as he did to love.