Hope for the blind 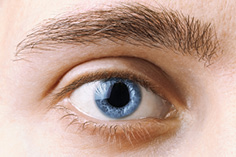 In Luke's Gospel, a blind man is screaming. He wants to attract the attention of Jesus and experiences great blessings. On the street of Jericho lies the blind beggar Bartimaeus, son of Timaeus, at the wayside. He was one of many who had lost their hope of earning their own living. They depended on the generosity of others. I guess most of us can barely get into this situation to really understand what it was like to be Bartimaeus and ask for bread to survive?

Jesus passed through Jericho with his disciples and a large crowd. “When Bartimaeus heard them, he researched what that was. They announced to him that Jesus of Nazareth was going past. He cried: Jesus, son of David, have mercy on me »! (from Luke 18,36-38). He immediately understood that Jesus was the Messiah. The symbolic content of the story is remarkable. The man waited for something to happen. He was blind and there was nothing he could do to change his situation. When Jesus passed through his city, the blind man immediately recognized him as the Messiah (the Messenger of God) who could cure him of his blindness. So he screamed loudly to draw attention to his plight, so much so that the crowd in the crowd said to him, "Be quiet - stop screaming!" But the resistance made the man insist on his request. "Jesus stopped and said: Call him here! They called the blind man and said to him: Be confident, get up! He calls you! Then he threw off his coat, jumped up and came to Jesus. And Jesus answered him and said, What do you want me to do for you? The blind man said to him: Rabbuni (my master) that I will see. Jesus said to him: Go, your faith has helped you. And immediately he saw and followed him on the way » (Mark 10,49-52).

Could you be in exactly the same situation as Bartimaeus? Do you realize that you are not able to really see on your own, you need help? You may hear other people's message "Keep calm - Jesus is too busy to deal with you". The message and reaction of disciples and followers of Jesus should be: "Habakkuk only courage, get up! He calls you! I bring you to him! »

You have found the real life you were looking for, "Jesus, your master!" Jesus not only gives blind Bartimaeus, but also grace and mercy to you. He hears your screams and gives you the new view to understand who you are.

Bartimaeus is an impressive example of succession. He recognized his own inability, trusted Jesus as the one who could give him God's grace, and, as soon as he could see clearly, followed him as a disciple of Jesus.

Hope for the blind