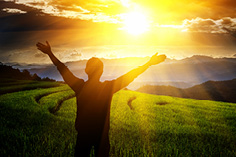 The main dispute between Jews and Samaritans at the time of Jesus was where God should be worshiped. Since the Samaritans no longer had a stake in the temple in Jerusalem, they took the view that Mount Garizim was the right place for the worship of God and not Jerusalem. When building the temple, some Samaritans had offered to help the Jews rebuild their temple, and Serubbabel had abruptly rejected them. The Samaritans responded by complaining to the king of Persia and stopped working (Esra [space]] 4). When the Jews rebuilt the city walls of Jerusalem, the governor of Samaria threatened to take military action against the Jews. Finally, the Samaritans built their own temple on Mount Garizim, which the Jews in 128 BC. BC destroyed. Although the foundation of your two religions was the law of Moses, they were bitter enemies.

Most Jews avoided Samaria, but Jesus went to this country with his disciples. He was tired, so he sat down at a fountain near the city of Sychar and sent his disciples into the city to buy food there (John 4,3: 8). A woman from Samaria came by and Jesus spoke to her. She was surprised that he was talking to a Samaritan woman, and his disciples in turn that he was talking to a woman (V. 9 and 27). Jesus was thirsty but had nothing with him to draw the water - but she did. The woman was touched that a Jew actually intended to drink from a Samaritan woman's water tank. Most Jews viewed such a vessel as unclean, according to their rites. "Jesus answered and said to her, If you recognized the gift of God and who is he who says to you: Give me to drink, you will ask him, and he will give you living water" (John 4,10).

Jesus used a pun. The expression "living water" usually stood for moving, flowing water. The woman knew very well that the only water in Sychar was that in the well and that there was no flowing water nearby. So she asked Jesus what he was talking about. "Jesus answered and said to her, Whoever drinks of this water will be thirsty again; but whoever drinks of the water that I give him will never be thirsty forever, but the water that I will give him will become a source of water in him that swells in eternal life » (John 4,13: 14).

Was the woman ready to accept the spiritual truth of an enemy of faith? Would she drink Jewish water? She could understand that she would never thirst with such a source and would not have to work so hard anymore. Unable to grasp the truth of which he spoke, Jesus turned to the fundamental problem of the woman. He suggested that she call her husband and come back with him. Although he already knew she had no husband, she still asked, possibly as a sign of his spiritual authority.

Now that she had learned that Jesus was a prophet, the Samaritan raised the age-old controversy between the Samaritans and the Jews, which was the right place to worship God. "Our fathers worshiped on this mountain, and you say that Jerusalem is the place to worship" (John 4,20).

"Jesus said to her: Believe me, woman, the time is coming that you will not worship the Father either on this mountain or in Jerusalem. You don't know what you worship; but we know what we worship; for salvation comes from the Jews. But the hour is coming and it is now that the true worshipers will worship the Father in spirit and in truth; because the father also wants such worshipers. God is spirit, and those who worship him must worship him in spirit and in truth » (John 4,21: 24).

Did Jesus suddenly change the subject? No, not necessarily. The gospel of John gives us further pointers: "The words that I have spoken to you are spirit and are life" (John 6,63). «I am the way and the truth and the life» (John 14,6). Jesus revealed a great spiritual truth to this strange Samaritan woman.

But the woman was not quite sure what to make of it and said: «I know that the Messiah, who is called Christ, is coming. When he comes, he will tell us everything. Jesus said to her: It is I who speak to you » (Vv. 25-26).

His self-disclosure «It's me» (the Messiah) - was very unusual. Jesus clearly felt well and could speak openly to confirm that what he told her was right. The woman left her water jug ​​and went home to tell everyone about Jesus; and she persuaded people to check it for themselves, and many of them came to believe. "But many of the Samaritans from this city believed in him for the sake of the word of the woman who testified that he told me everything I did. When the Samaritans came to him, they asked him to stay with them; and he stayed there for two days. And many more believed because of his word » (Vv. 39-41).

God is spirit, and our relationship with him is spiritual. The focus of our worship is more on Jesus and our relationship with him. He is the source of living water that we need for our eternal life. It requires our consent that we need them and ask him to quench our thirst. To put it another way, in the metaphor of Revelation, we have to admit that we are poor, blind and naked, asking Jesus for spiritual wealth, eyesight and clothing.

You pray in spirit and in the truth when you seek with Jesus what you need. True devotion and worship of God is not characterized by outward appearances, but by your attitude towards Jesus Christ, and it means hearing the words of Jesus and coming through him to your spiritual Father.