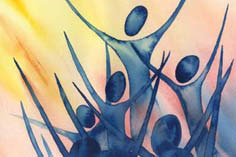 Hell is the separation and alienation from God that incorrigible sinners have chosen. In the New Testament, hell is pictorial as a “fiery pool”, “darkness”, and Gehenna (after the valley of Hinnom near Jerusalem, a place of incineration for rubbish). Hell is described as punishment, suffering, torment, eternal ruin, howling and gnashing of teeth. Scheol and Hades, two terms from the biblical origins often translated with “hell” and “grave”, mostly refer to the realm of the dead. The Bible teaches that unrepentant sinners will suffer the second death in the fiery pool, but it does not make it absolutely clear whether this means annihilation or conscious spiritual alienation from God. (2 Thessalonians 1,8-9; Matthew 10,28; 25,41.46; Revelation 20,14-15; 21,8; Matthew 13,42; Psalm 49,14-15)

“If your right hand seduces you to fall away, cut it off and throw it away. It is better for you that one of your limbs spoil and not your whole body go to hell » (Matthew 5,30). Hell is very serious. We have to take Jesus' warning seriously.

When it comes to hell, we have to listen to Jesus, as with many other topics. If we take Jesus seriously, if he teaches about grace and mercy, we should also take him seriously when he talks about punishment. After all, mercy does not mean much, unless we are spared by something.

In a parable, Jesus warned that the wicked were thrown into a furnace (Matthew 13,50). In this parable, he did not speak about cremation, but about "howling and tooth-chopping". In another parable, Jesus describes the punishment of a servant who received forgiveness who did not forgive his fellow servant as "torment" (Matthew 18,34). Another parable describes an evil person who is bound and thrown out "into the darkness" (Matthew 22,13). This darkness is described as a place of wine and chattering teeth.

Does the punishment of the wicked last forever? The Bible can be interpreted in various ways on this point. Some verses suggest eternal punishment, while others suggest a limited duration. But either way, hell should be avoided in any case.

This reminds me of a book by InterVarsity Press on the subject: Two Views of Hell (Two views on hell). Edward Fudge argues for annihilation; Robert Peterson argues for eternal suffering. There are two men on the cover of this book, both with their hands in front
the head in an expression of fear or horror. The graph is meant to express that,
Although there are two views about hell, it is horrible no matter how one sees hell. God is merciful, but the person who opposes God rejects his mercy and suffers.

Jesus used a variety of images to punish those who reject God's mercy: fire, darkness, anguish, and destruction.

The apostles also spoke of judgment and punishment, but they described it in different ways. Paul wrote: “But grace and anger are those who are contentious and do not obey the truth, but obey injustice; Tribulation and fear over all souls of people who do evil, first of all the Jews and also the Greeks » (Romans 2,8-9).

Regarding those who persecuted the Church in Thessalonica, Paul wrote: "They will suffer punishment, eternal ruin, from the face of the Lord and from his glorious power" (2 Thessalonians 1,9). That is why we define hell in our beliefs as “separation and alienation from God”.

The Old Testament punishment for rejecting the Mosaic Law was death, but anyone who consciously rejects Jesus deserves a greater punishment, says Hebrews 10,28: 29: “It is terrible to fall into the hands of the living God” (V.31). God is merciful beyond imagination, but when a person refuses to be merciful, only judgment remains. God does not want anyone to suffer the horrors of hell - he wants everyone to come to repentance and salvation (2 Peter 2,9). But those who reject such wonderful grace will suffer. That is their decision, not God's. Hence our beliefs state that hell was "chosen by incorrigible sinners". This is an important part of the picture.

The final victory of God is also an important part of the picture. Everything will be brought under the control of Christ because he has redeemed all creation (1 Corinthians 15,20-24; Colossians 1,20). Everything will be fixed. Even death and the realm of the dead will be destroyed in the end (Revelation 20,14). The Bible doesn't tell us how hell fits this picture, nor do we pretend to know. We just trust that God, who is full of justice and mercy, will do it all in the best possible way.

The justice and the mercy of God

A God of love would not torment people for all eternity, some say. The Bible reveals a God who is compassionate. Rather, he would free people from their misery instead of letting them suffer forever. The traditional doctrine of eternally punitive hell, many believe, is misrepresented by God as a vindictive sadist who sets a horrible example. Moreover, it would not be right to eternally punish people for a life that lasted only a few years or decades.

The problem is that people don't understand justice or mercy well. People are not qualified to judge - but Jesus Christ is. He will judge the world with justice (Psalm 9,8; John 5,22; Romans 2,6-11). We can trust his judgment, knowing that he will be both just and merciful.

When the subject of hell is addressed, some parts of the Bible seem to emphasize pain and punishment and others use the images of destruction and end. Instead of trying to reconcile one description with the other, let's both talk. When it comes to hell, we have to trust God, not our imagination.

From everything Jesus said about hell, the most important thing is that Jesus is the solution to the problem. There is no damnation in it (Romans 8,1). It is the way, the truth and the eternal life.