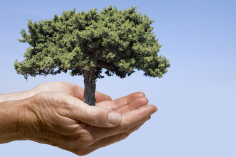 What does it mean to be a child of God?

The disciples of Jesus could occasionally be quite self-sufficient. Once they asked Jesus: "Who is the greatest in the kingdom of heaven?" (Matthew 18,1). In other words: what personal qualities does God want to see among his people, what examples does he find the best?

Good question. Jesus took them up to make one important point clear: "If you do not turn around and become like children, you will not come to the kingdom of heaven" (V.3).

The disciples must have been surprised, if not confused. Perhaps they thought of someone like Elijah who called down fire from heaven to consume some enemies, or a zealot like Pinhas who killed people who compromised the Law of Moses (Genesis 4: 25,7-8). Were they not the greatest in the history of the people of God?

But her idea of ​​size was centered on wrong values. Jesus shows them that God does not want to see in his people either showings or bold actions, but rather characteristics that are more likely to be found in children. It is clear that if you do not become like young children, you will not get into the Reich at all!

In what way should we be like children? Should we be immature, childish, ignorant? No, we should have left childish ways long ago (1 Corinthians 13,11). We should have removed some of the child's characteristics, while keeping others.

One of the qualities we need is humility, as Jesus says in Matthew 18: 4: "Whoever humbles himself like this child is the greatest in the kingdom of heaven." According to God's idea, a humble person is the greatest - his example is the best in God's eyes that he wants to see in his people.

For good reason; for humility is a quality of God. God is ready to give up his privileges for our salvation. What Jesus did when he became flesh was not an anomaly of the nature of God, but a revelation of the abiding, real being of God. God wants us to become like Christ, also willing to give up privileges to serve others.

Some children are humble, others are not. Jesus used a certain child to make one point: we should behave in a way like children - especially in our relationship to God.

Jesus also said that as a child you should be warm to other children (V. 5), with which he certainly thought of both literal children and children in the figurative sense. As adults, we should treat young people with courtesy and respect. Likewise, we should politely and respectfully receive new believers who are still immature in their relationship with God and in their understanding of Christian teaching. Our humility extends not only to our relationship with God, but also to that of other people.

Jesus knew that he had a unique relationship with God. Only he knew the father well enough to be able to reveal him to others (Matthew 11,27). Jesus addressed God with the Aramaic Abba, a tender expression that children and adults used for their fathers. It roughly corresponds to our modern word "papa". In prayer, Jesus talked to his papa, asked for help and thanked him for his gifts. Jesus teaches us that we do not have to flatter to get an audience with the king. He is our dad. We can address him because he is our dad. He gave us this privilege. So we can be confident that he will hear us.

Even though we are not God's children in the same way that Jesus is a son, Jesus did teach his disciples to pray to God as a papa. Many years later, Paul took the view that the church in Rome, more than a thousand miles from the Aramaic-speaking areas, may call on God with the Aramaic word Abba (Romans 8,15).

It is not necessary to use the word Abba in today's prayers. But the widespread use of the word in the early church shows that it impressed the disciples very much. They had been given a particularly close relationship with God, a relationship that guaranteed them access to God through Jesus Christ.

The word Abba was something special. Other Jews did not pray like that. But the disciples of Jesus did it. They knew God as their dad. They were children of the king, not just members of a chosen nation.

The use of various metaphors served the apostles to express the new community that believers had with God. The term salvation conveyed the idea that we would become God's property. We were redeemed from the slave market of sin at a tremendous price - the death of Jesus Christ. The “prize” was not given to any particular person, but it does convey the thought that our salvation was costly.

The term reconciliation emphasized the fact that once upon a time we were enemies of God and that now the friendship through Jesus Christ was restored. His death permitted the repayment of the sins of God that separated us from our sins. God did this for us because we could not possibly do it for ourselves.

Then the Bible gives us many analogies. But the fact of using different analogies leads us to the conclusion that none of them alone can give us the complete picture. This is especially true of two analogies that would otherwise contradict each other: the first shows that we were born [from the top] as children of God, and the other that we were adopted.

These two analogies show us something important in relation to our salvation. Being born again means that there is a radical change in our human being, a change that starts small and grows throughout our lives. We are a new creation, new people living in a new age.

Adoption means that once upon a time we were foreigners of the kingdom, but were now declared God's children by God's decision and with the help of the Holy Spirit, and have full rights to inheritance and identity. We, the distant ones, have been brought near by the saving work of Jesus Christ. In him we die, but because of him we do not have to die. We live in him, but it is not us who are the living, but we are new people created by the Spirit of God.

Every metaphor has its meaning, but also its weak points. Nothing in the physical world can fully convey what God is doing in our lives. With the analogies that he gave us, the biblical picture of divine filiation is especially agreed.

God is creator, provider and king. But what is even more important to us is his dad. It is an intimate volume that is expressed in the most significant relationship of the culture of the first century.

In today's society mothers are more likely to play the more important role. Many people today have a better relationship with the mother than with the father. If the Bible were written today, one would certainly consider maternal parables as well. But in biblical times, the fatherly parables were more important.

The judgment that God is no better than our earthly father is not ours. But perhaps we are creative enough to imagine him in an idealized parent relationship that a human being can never achieve. God is better than the best father.

How do we as God's children look up to God as our Father?

These are enormous blessings. Maybe you think of more. But I'm sure there's nothing better in the universe than being a child of God. That is the greatest blessing of the Kingdom of God. When we become like little children, we become heirs of all the joy and blessings of all
eternal kingdom of God that can not be shaken.