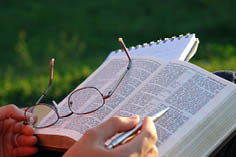 Scripture is the inspired Word of God, the faithful textual testimony of the Gospel, and the true and accurate rendition of God's revelation to man. In this respect, the Holy Scriptures are infallible and fundamental for the Church in all questions of teaching and life. How do we know who Jesus is and what Jesus taught? How do we know if a gospel is real or false? What authoritative basis is there for teaching and life? The Bible is the input and infallible source of what God's will tells us to know and do. (2 Timothy 3,15:17 - 2; 1,20 Peter 21: 17,17; John)

Many educated people reject the Bible. Others, equally educated, consider them to be a credible chronicle of what God has done and said. If we can not trust what the Bible says about Jesus, then we have almost nothing left to know about Him.

The "Jesus Seminar" began with a preconceived notion of what Jesus would have taught. They only accepted statements that fit this picture and rejected those that did not. This practically created a Jesus in your image. This is highly questionable from a scientific point of view and even many liberal scientists disagree with the “Jesus Seminar”.

Do we have good reason to believe that the biblical accounts of Jesus are credible? Yes - they were written in the space of a few decades after Jesus' death, when eyewitnesses were still alive. Jewish disciples often memorized the words of their teachers; so it is very probable that Jesus' disciples also handed down the teachings of their Master with sufficient accuracy. We have no evidence that they have invented words to resolve issues in the early church, such as the circumcision issue. This suggests that their accounts faithfully reflect what Jesus taught.

We can also assume a high level of reliability in the transmission of the textual sources. We have manuscripts from the fourth century and smaller parts from the second. (The oldest surviving Virgil manuscript was created 350 years after the poet's death; at Plato 1300 years later.) A comparison of the manuscripts shows that the Bible was carefully copied and that we have a highly reliable text.

Jesus: the chief witness of Scripture

In many questions, Jesus was ready to quarrel with the Pharisees, but in one, apparently, not in recognition of the revelatory nature of Scripture. He often took different views on interpretations and traditions, but apparently agreed with the Jewish priests that Scripture was the authoritative basis for faith and action.

The authority of God was behind Scripture. Jesus countered the temptations of Satan: "It is written" (Matthew 4,4: 10). The mere fact that something was written made it incontestably authoritative for Jesus. David's words were inspired by the Holy Spirit (Mark 12,36); a prophecy had been given "by" Daniel (Matthew 24,15) because God was their true origin.

In Matthew 19,4: 5-1, Jesus says that the Creator spoke in Genesis 2,24: "Therefore a man will leave father and mother and hang on his wife, and the two will be one flesh." However, the story of creation does not attribute this word to God. Jesus could attribute it to God simply because it was written. Underlying assumption: The actual author of the scripture is God.

It is clear from all the gospels that Jesus viewed Scripture as reliable and trustworthy. He held out to those who wanted to stone him: "Scripture cannot be broken" (John 10:35). Jesus considered them to be completely valid; he even defended the validity of the Old Covenant's commandments while the Old Covenant was still in effect (Matthew 8,4:23,23;).

The testimony of the apostles

Like their teacher, the apostles considered scripture authoritative. They often quoted them, often to support a point of view. The words of Scripture are treated as the words of God. Scripture is even personalized as the God who spoke to Abraham and Pharaoh in verbal speech (Romans 9,17:3,8; Galatians). What David and Isaiah and Jeremiah wrote is actually spoken by God and is therefore certain (Acts 1,16; 4,25; 13,35; 28,25; Hebrews 1,6-10; 10,15). The law of Moses, it is assumed, reflects the mind of God (1 Corinthians 9,9). The actual author of the scripture is God (1 Corinthians 6,16:9,25; Romans).

Paul calls Scripture "what God has spoken" (Romans 3,2). According to Peter, the prophets did not speak "out of human will", "but driven by the Holy Spirit, people spoke in the name of God" (2 Peter 1,21). The prophets did not come up with it themselves - God has given it to them, he is the actual author of the words. They often write: "And the word of the Lord came ..." or: "So the Lord speaks ..."

Paul wrote to Timothy: "All Scripture has been entered by God and is useful for teaching, for conversion, for rebuke, for instruction in righteousness ..." (2 Timothy 3,16, Elberfeld Bible). However, we cannot read our modern ideas of what “God-breathed” means here. We must remember that Paul meant the Septuagint translation, the Greek translation of the Hebrew scriptures (that was the scripture that Timothy knew from childhood - verse 15). Paul used this translation as the Word of God, without saying that it is a perfect text.

Despite the translational discrepancies, he is God-breathed and "useful for education in justice" and can have the effect that "God's man is perfect, sent to all good work" (Verses 16-17).

The original word of God is perfect and God can make sure that people put it in the right words, that they keep it right and (to complete the communication) that they understand it correctly. However, God has not done this completely and completely. Our copies have grammatical and transcription errors, and (which is far more important) there are errors in receiving the message. “Noise” to a certain extent prevents us from hearing the word he entered correctly. Nevertheless, God uses Scripture to speak to us today.

In spite of the "noise", despite the human errors that are between us and God, the Scripture fulfills its purpose: to tell us about salvation and the right behavior. God achieves what He wanted with Scripture: He gives us His Word with sufficient clarity that we can attain salvation and that we can experience what He demands of us.

The script fulfills this purpose, even in translated form. However, we failed, we expected more from her than it is God's purpose. It is not a textbook of astronomy and science. The numbers of the font are not always mathematically exact by today's standards. We must go after the great purpose of the Scriptures and not cling to trifles.

Is this a contradiction? Technically yes. The prophecy was true in principle, but not in the details. Of course, when he wrote this down, Luke could easily have faked the prophecy to fit the result, but he did not seek to cover up the differences. He did not expect readers to expect precision in such details. This should warn us against expecting accuracy in every detail of Scripture.

We have to look at the main point of the message. Similarly, Paul made a mistake when he 1. Corinthians 1,14 wrote - a mistake he corrected in verse 16. The inspired typefaces contain both the mistake and the correction.

Some people compare Scripture with Jesus. One is the Word of God in human language; the other is the Incarnate Word of God. Jesus was perfect in the sense that he was sinless, but that does not mean that he never made mistakes. As a child, even as an adult, he might have made grammatical mistakes and carpenter mistakes, but such mistakes were not sins. They did not stop Jesus from fulfilling his purpose of being a sinless sacrifice for our sins. Likewise, grammatical errors and other trivialities are not detrimental to the meaning of the Bible: to lead us to the salvation of Christ.

Evidence for the Bible

Nobody can prove that the entire content of the Bible is true. You may be able to prove that a certain prophecy has arrived, but you can not prove that the entire Bible has the same validity. It is more a question of faith. We see the historical evidence that Jesus and the apostles considered the Old Testament to be the Word of God. The biblical Jesus is the only one we have; other ideas are based on assumptions, not new evidence. We accept the teaching of Jesus that the Holy Spirit will lead the disciples to new truth. We accept Paul's claim to write with divine authority. We accept that the Bible reveals to us who God is and how we can have fellowship with him.

We accept the testimony of church history that through the centuries Christians have found the Bible useful for faith and life. This book tells us who God is, what He has done for us, and how we should respond. Tradition also tells us which books belong to the biblical canon. We rely on God's directing the canonization process so that the result was his will.

Our own experience speaks for the truth of Scripture. This book does not mince words and shows us our sinfulness; but it also offers us grace and a purified conscience. It does not give us moral power through rules and orders, but in an unexpected way - through grace and through the ignominious death of our Lord.

The Bible bears witness to the love, joy, and peace we can have through faith - feelings that, just as the Bible says, transcend our ability to verbalize them. This book gives us meaning and purpose in life, telling us about divine creation and salvation. These aspects of biblical authority can not be proven to skeptics, but they do help to validate Scripture, which tells us of things we experience.

The Bible does not beautify its heroes; This also helps us to accept them as reliable. It tells of the human weaknesses of Abraham, Moses, David, the people of Israel, the disciples. The Bible is a word that testifies to a more authoritative Word, the Incarnate Word, and the good news of the grace of God.

The Bible is not simplistic; she does not make it easy. On the one hand, the New Testament continues the old covenant and on the other hand breaks with it. It would be easier to do without one or the other altogether, but it is more demanding to have both. Similarly, Jesus is portrayed as a man and a god at the same time, a combination that does not want to fit well into either Hebrew, Greek or modern thought. This complexity was not created by ignorance of philosophical problems, but in defiance of them.

The Bible is a challenging book, it can hardly have been written by uneducated desert dwellers who wanted to make a fake or give hallucinations sense. Jesus' resurrection adds weight to the book that announces such a phenomenal event. It gives added weight to the disciples' testimony of who Jesus was - and the unexpected logic of victory over death through the death of the Son of God.

The Bible repeatedly questions our thinking about God, about ourselves, about life, about right and wrong. It requires respect because it gives us truths that we cannot attain anywhere else. In addition to all theoretical considerations, the Bible “justifies” itself above all in its application to our lives.

The testimony of Scripture, Tradition, Personal Experience, and Reason in general supports the authority of the Bible. The fact that she speaks across cultural boundaries, that she addresses situations that did not exist at the time of writing - that, too, testifies to her abiding authority. The best biblical proof for the believer, however, is that the Holy Spirit, with their help, can bring about a change of heart and fundamentally change life.