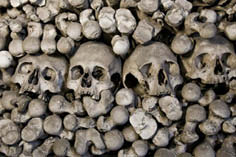 What about the “intermediate state”?

In the past, we usually took a dogmatic stance on the so-called "intermediate state," that is, whether a person is unconscious or conscious between death and resurrection. But we don't know. Throughout Christian history, the majority held that after death, man is consciously with God or consciously punished. The minority's opinion is known as "soul sleep".

Most of us are familiar with verses that describe death as "sleep," like those in the Book of Preachers and the Psalms. These verses are written from a phenomenological perspective. In other words, when you look at the physical phenomenon of a dead body, it appears that the body is sleeping. In such sections, sleep is a picture of death related to the appearance of the body. However, when we read verses like Matthew 27,52:11,11, John 13,36, and Acts, it seems that death is literally equated with "sleep" - even though the authors were aware that there was a significant difference between Death and sleep there.

However, we should also pay serious attention to the verses that indicate post-death awareness. In 2 Corinthians 5,1: 10-4, Paul seems to refer to the intermediate state with the words "naked" in verse 8 and as "being at home with the Lord" in verse 1,21. In Philippians 23: 22,43, Paul says that dying is a "gain" because Christians leave the world "to be with Christ". This doesn't sound like unconsciousness. This can also be seen in Luke, where Jesus said to the robber on the cross: "Today you will be with me in paradise." The Greek is translated clearly and correctly.

Ultimately, the doctrine of the intermediate state is something that God chose not to describe us in the Bible accurately and dogmatically. Perhaps it is simply beyond human ability to grasp it, even if it could be explained. This teaching is certainly not a question about which Christians should argue and split. As the Evangelical Dictionary of Theology explains: "Speculation about the intermediate state should never diminish the certainty that comes from the cross or the hope of the new creation."

Who would want to complain to God if he is in full consciousness with God after death and say: "I should actually sleep until Jesus returns - why am I actually conscious?" And of course, if we are unconscious, we will not be able to complain. Either way, we will be with God in the next conscious moment after death.