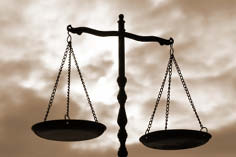 »The court is coming! The judgment is coming! Repent now, or you will go to hell. » They may have heard some "street evangelists" roaming these words trying to scare people into making a commitment to Christ. Or, you may have seen such a person satirized in films with a maudlin look.

Perhaps this is not so far from the image of the “eternal judgment” that many Christians believed in over the centuries, especially in the Middle Ages. You can find sculptures and paintings depicting the righteous soaring to meet Christ and the unjust who are dragged to hell by cruel demons.

These pictures of the Last Judgment, the judgment on eternal fate, come from New Testament statements about the same. The Last Judgment is part of the teaching of the "last things" - the future return of Jesus Christ, the resurrection of the just and the unjust, the end of the present evil world, which will be replaced by the glorious kingdom of God.

The Greek word for "court" used in the New Testament passages is krisis, from which the word "crisis" is derived. Krisis refers to a time and situation when a decision is made for or against someone. In this sense, a crisis is a point in a person's life or in the world. Krisis specifically refers to the activity of God or the Messiah as the judge of the world at the so-called Last Judgment or the Day of Judgment, or we could say the beginning of the "eternal judgment".

Jesus also described the nature of the Last Judgment in symbolic form as the separation of the sheep from the goats: "But if the Son of Man comes in his glory, and all angels with him, he will sit on the throne of his glory, and all nations will be gathered before him. And he will separate them from one another like a shepherd separates the sheep from the goats, and will put the sheep on his right and the goats on the left » (Matthew 25,31: 33).

The sheep on his right hand are informed of their blessing in the following words: "Come here, blessed my father, inherit the kingdom that has been prepared for you from the beginning of the world!" (V.34). The goats on the left are also informed of their fate: "Then he will also say to those on the left: Get away from me, you cursed, into the eternal fire that is prepared for the devil and his angels!" (V.41).

This scenario of the two groups gives the righteous confidence and pushes the bad guys into a time of a unique crisis: «The Lord knows how to save the pious from the temptation, but to hold the unrighteous for the day of judgment to punish them» (2 Peter 2,9).

Paul also speaks of this double day of judgment, calling it "the day of anger when his just judgment will be revealed" (Romans 2,5). He says: «God, who will give everyone according to his works: eternal life for those who, with patience, with good works, strive for glory, honor and immortal life; Disgrace and anger, however, to those who are contentious and disobey the truth, but obey injustice » (Vv. 6-8).

Such biblical passages define doctrine of eternal or final judgment in plain terms. It is an either / or situation; there are the redeemed in Christ and the unredeemed wicked who are lost. A number of other passages in the New Testament refer to this
“Last judgment” as a time and situation from which no one can escape. Perhaps the best way to get a taste of this future time is to quote a few sections that mention it.

The letter to the Hebrews speaks of judgment as a crisis situation that every person will face. Those who are in Christ, who are saved by His redemptive work, will find their reward: «And as men are destined to die once, but then judgment: Christ was once sacrificed to take away the sins of many; for the second time he will not appear for sin, but for those who are waiting for him to salvation » (Hebrews 9,27: 28).

The people who are saved, who have been made just by his redemption work, need not fear the Last Judgment. Johannes assures his readers: «In this love is perfect with us, that we have confidence on the day of judgment; because as he is, so are we in this world. Fear is not in love » (1 John 4,17). Those who belong to Christ will receive their eternal reward. The godless will suffer their terrible fate. "So the heaven that is now and the earth are saved by the same word for the fire, saved for the day of judgment and the damnation of the godless people" (2 Peter 3,7).

Our statement says that "in Christ the Lord makes gracious and just provision for everyone, including those who apparently did not believe in the gospel at death." We are not saying how God makes such provision, except that whatever it is, such provision is made possible through Christ's salvation work, as is the case with those who are already saved.

Jesus himself pointed out in several places during his earthly ministry that care is taken for the un-evangelized dead to be given the opportunity of salvation. He did so by declaring that the population of some ancient cities would favor the court in comparison with the cities of Judah where he preached:

Here are people of ancient cities - Tire, Sidon, Nineveh - who obviously did not have the opportunity to hear the gospel or know Christ's work of salvation. But they find the judgment endurable, and send a damning message to those who have rejected it in this life, just by standing before their Savior.

Jesus also makes the shocking statement that the ancient cities of Sodom and Gomorrah - proverbs for any gross immorality - would find the judgment more bearable than certain cities in Judea in which Jesus had taught. To put it in the context of how startling Jesus' statement is, let's look at how Judas portrays the sin of these two cities and the consequences they received in their lives for their actions:

"For the judgment of the big day, he also held the angels, who did not maintain their heavenly rank but left their dwelling, with eternal bonds in the darkness. So Sodom and Gomorrah and the surrounding cities, which, like them, have fornicated and pursued other flesh, are, for example, set and suffer the torment of the eternal fire » (Judas 6-7).

But Jesus says of the cities in the future judgment. "Truly, I tell you, the land of Sodomer and Gomorrer will be more tolerable on the day of judgment than this city [that is, the cities that the disciples did not accept]" (Matthew 10,15).

So perhaps this suggests that the events of the Last Judgment or the Eternal Judgment do not quite agree with what many Christians have accepted. The late Reformed theologian, Shirley C. Guthrie, suggests that we do well to reorient our thinking about this crisis event:

The first thought Christians have when they think of the end of the story should not be fearful or vengeful speculation about who will be "inside" or "go up" or who will be "outside" or "go down". It should be the grateful and joyous thought that we can look forward with confidence when the will of the Creator, Reconciler, Redeemer and Restorer will prevail once and for all - when justice over injustice, love over hate and greed, peace over hostility, humanity over inhumanity, the kingdom of God will triumph over the powers of darkness. The Last Judgment will not come against the world, but for the benefit of the world. This is good news not only for Christians, but for everyone!

Indeed, this is what the last things are about, including the Last Judgment or Eternal Judgment: the triumph of the God of love over everything that stands in the way of his eternal grace. Hence the apostle Paul says: «Afterwards the end when he hands over the kingdom to God the Father after he has destroyed all rule and all power and violence. Because he must rule until God puts all enemies under his feet. The last enemy to be destroyed is death » (1 Corinthians 15,24: 26).

The one who will be in the Last Judgment the judge of those who have been made righteous by Christ and those who are still sinners is none other than Jesus Christ who gave his life as a ransom for all. "For the father judges no one," said Jesus, "but handed over all judgment to the son." (John 5,22).

The one who judges the righteous, the un-evangelized and even the wicked is the one who gave his life so that others could live forever. Jesus Christ has already taken the judgment on sin and sinfulness. This does not mean that those who reject Christ can avoid suffering the fate that will bring their own decision. What the image of the compassionate judge, Jesus Christ, tells us is that he desires that all men attain eternal life - and he will offer it to all those who place their faith in him.

Those who are called in Christ - who were "chosen" by Christ's election - can face judgment with confidence and joy, knowing that their salvation is safe in him. Those who are not evangelized - those who have not had the opportunity to hear the gospel and put their faith in Christ - will also find that the Lord has made provision for them. Judgment should be a time of joy for everyone, as it will usher in the glory of God's eternal kingdom where nothing but goodness will exist for all eternity.

In contrast to the all-reconciliation, the Bible speaks both of "sheep" who enter the kingdom of God and of "goats" who enter into the eternal punishment (Matthew 25,46). God's grace does not force us to be docile. In Jesus Christ, who is God's chosen for us, all of humanity is chosen, but that does not mean that all people will ultimately accept God's gift. God wants all people to repent, but He has created and redeemed humanity for real fellowship with him, and true fellowship can never be a forced relationship. The Bible points out that some people will persist in rejecting God's mercy.