The gift of motherhood 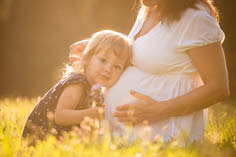 Motherhood is one of the greatest works in the creation of God. That came back to my mind when I recently thought about what I could give my mother and mother-in-law to my wife and mother-in-law. I like to remember the words of my mother, who often told my sisters and me how happy she was to be our mother. Having given birth to us, she would have completely rediscovered the love and greatness of God. I could only begin to understand that when our own children were born. I still remember how surprised I was when, with my wife Tammy, the pain of childbirth turned to an awesome joy as she held our son and daughter in our arms. For the past few years, it has been awe-inspiring to think of mothers' love. Of course there is a difference to my way of love and we have also experienced the love of our father in other ways.

Given the intimacy and strength of motherly love, it comes as no surprise that Paul included motherhood in important statements about God's covenant with men when he was in Galatians 4,22: 26 (Luther 84) writes the following:

"For it is written that Abraham had two sons, one from the handmaid, the other from the free. But that of the handmaid was created after the flesh, that of the free woman by virtue of the promise. These words have a deeper meaning. For the two women mean two covenants: one from Mount Sinai, who gives birth to bondage, that is Hagar; for Hagar means Mount Sinai in Arabia and is a parable for Jerusalem now, which lives in bondage with its children. But the Jerusalem that is above is free; that is our mother. »

As you just read, Abraham had two sons: Isaac from his wife Sara and Ishmael from his handmaid Hagar. Ismael was born naturally. With Isaac, however, a miracle was needed due to a promise, since his mother Sara was no longer of childbearing age. It was thanks to God's intervention that Isaac was born. Jacob became Isaac (his name was later changed to Israel) and Abraham, Isaac and Jacob became the progenitors of the people of Israel. At this point, it is important to point out that all the women of the ancestors could only have children through the supernatural intervention of God. For many generations, the chain of descent leads to Jesus, God's Son, who was born a human being. Please read what TF Torrance wrote:

The chosen tool of God in the hand of God for the salvation of the world is Jesus of Nazareth, born of the womb of Israel - but he was not only a tool, but God Himself. He came in human form as a servant to our inner nature with his To heal limitations and its insubordination, and to triumphantly restore the living communion with God through the reconciliation of God with humanity.

We recognize Jesus in the story of Isaac. Isaac was born through supernatural intervention, whereas Jesus' birth goes back to supernatural procreation. Isaac had been identified as a potential victim, but Jesus was in fact and voluntarily the Atonement that humanity reconciled with God. There is also a parallel between Isaac and us. For us, this corresponds to the supernatural intervention at the birth of Isaac (supernatural) rebirth by the Holy Spirit. With this we become brothers of Jesus (John 3,3:5;). We are no longer children of bondage under the law, but adopted children, accepted into God's family and kingdom and have an eternal legacy there. This hope is certain.

In Galatians 4 Paul compares the old and the new covenant. As we have read, he connects Hagar with the people of Israel under the old covenant on Sinai and with the Mosaic law, which was not promised family membership and no inheritance in God's kingdom. With the new covenant, Paul refers back to the original promises (with Abraham) that God should become the God of Israel and Israel his people and through them all families on earth should be blessed. These promises are fulfilled in God's covenant of grace. Sara was given a son, born as a direct family member. Grace does the same. Through Jesus' grace, people become adopted children, children of God with an eternal inheritance.

Paul makes a distinction between Hagar and Sara in Galatians 4. Hagar connects Paul with the then Jerusalem, a city under the rule of the Romans and the law. Sara, on the other hand, stands for "Jerusalem that is above", the mother of all children of God's grace with an inheritance. The legacy is much more than any city. It is the «heavenly city (Revelation 21,2) of the living God » (Hebrews 12,22), which will one day come down to earth. Heavenly Jerusalem is our hometown where we have our true civil rights. Paul calls Jerusalem, which is above, the free; she is our mother (Galatians 4,26). Connected to Christ through the Holy Spirit, we are free citizens and accepted by the Father as his children.

I thank God for Sara, Rebekah and Lea, the three tribal mothers at the beginning of the lineage of Jesus Christ. God chose these mothers, however imperfect they were, as well as Mary, the mother of Jesus, to send his Son to earth as a human being and who sent us the Holy Spirit to make us children of his father. Mother's Day is a special opportunity to thank our God of the Grace Covenant for the gift of motherhood. We thank him for our own mother, our mother-in-law and wife - for all mothers. Motherhood is truly an expression of God's wonderfully life-giving goodness.

Full of gratitude for the gift of motherhood,

The gift of motherhood