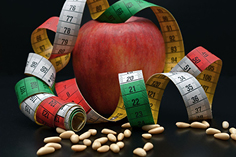 Again, a new year has begun. Many people have made good intentions for the new year. Often it is about personal health - especially after the many food and drink during the holidays. People all over the world are committed to doing more sports, eating less sweets and generally want to do a lot better. Although there is nothing wrong with taking such decisions, we Christians lack something in this approach.

These intentions all have something to do with our human willpower, so they often falter. In fact, experts have followed the success of New Year's resolutions. The results are not encouraging: 80% of them fail already before the second week of February! As believers, we are particularly aware of how fallible we humans are. We know the feeling the Apostle Paul describes in Romans 7,15: I do not know what I am doing. Because I do not do what I want; but what I hate, I do. One can hear Paul's frustration at his own lack of willpower, as he seems to know what God wants him to be.

Fortunately, as Christians we do not need our own determination. We can turn to something that is much more effective than the willingness to change ourselves: we can turn to prayer. Through Jesus Christ and the indwelling of the Holy Spirit, we can confidently pray before God, our Father. We are able to bring our fears and anxieties, our joys and our deep concerns to Him. It is human to look to the future and to hope for the coming year. Instead of making good intentions that will soon fade, I encourage you to join me and commit to making 2018 the Year of Prayer.

Nothing is too insignificant to bring it to our loving Father. But unlike the intentions at the beginning of the year, prayer is not only important to us. We can also use prayer as an opportunity to bring other people's concerns before the Lord.

The privilege of prayer for the New Year encourages me a lot. You see, I can have my own goals and expectations for 2018. However, I know that I am quite powerless to do it. But I know that we worship a loving and almighty God. In chapter eight of the letter to the Romans, just one chapter after his call to complain about his own weak will, Paul encourages us: but we know that those who love God do everything for the best, those who are called after his counsel (Romans 8,28). God is active in the world, and his almighty, loving will is geared towards the well-being of his children, regardless of the circumstances in which they live.

Some of you may have had a very good year at 2017 and are quite optimistic about the future. For others it was a difficult year, full of struggles and setbacks. They fear that 2018 could bring more burdens on them. No matter what this New Year brings to us, God is present, ready to listen to our prayers and requests. We have a god of infinite love, and no concern we can bring before him is too insignificant. God is pleased with our requests, our gratitude and our concerns in close conversation with him.

In prayer and in gratitude,