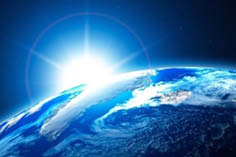 As a young teenager, I sat in a movie theater when the power went out. In the darkness, the murmur of the audience grew louder every second. I noticed how I tried suspiciously to look for an exit as soon as someone opened a door to the outside. Light streamed into the movie theater and the murmuring and my suspicious search were quickly over.

Until we are confronted with darkness, most of us consider light as something we take for granted. However, there is nothing to see without light. We only see something when light illuminates a room. Where this something reaches our eyes, it stimulates our optic nerves and produces a signal that allows our brain to be recognized as an object in space with a certain appearance, position and movement. Understanding the nature of light was a challenge. Earlier theories indispensably accepted light as a particle, then as a wave. Today, most physicists understand light as a wave particle. Notice what Einstein wrote: It seems that sometimes we have to use one and sometimes the other theory, while at times we can use both. We face a new kind of incomprehension. We have two contradictory images of reality. Individually, none of them can fully explain the appearance of light, but together they do.

An interesting aspect about the nature of light is why darkness has no power over it. Conversely, while light drives away darkness, it does not. This phenomenon plays out in Scripture, regarding the nature of God (the light) and the evil one (of darkness or darkness), a striking role. Notice what the apostle John said in 1 John 1,5: 7 (HFA) wrote: This is the message that we have heard from Christ and that we are telling you: God is light. There is no darkness with him. So if we claim that we belong to God and still live in the darkness of sin, then we are lying and contradicting the truth with our lives. But if we live in the light of God, we are also connected to each other. And the blood that his son Jesus Christ shed for us frees us from all guilt.

Like Thomas F. Torrance in his book Trinitarian Faith (Trinitarian Faith), the early church leader Athanasius, following the teachings of John and other Urapostles, used the metaphor of light and its radiation to speak about the nature of God as revealed to us by Jesus Christ: like light never without his charisma, the father is never without his son or without his word. In addition, just as light and shine are one and are not alien to one another, so the father and son are one and not alien to one another, but of one and the same nature. Just as God is eternal light, so the Son of God as eternal radiation is God in himself eternal light, without beginning and without end (Page 121).

Athanasius formulated an important point that he and other church officials rightly presented in the Nicene Creed: Jesus Christ shares one being with the Father (Greek = ousia) God. If this were not the case, it would have made no sense when Jesus announced: "Whoever saw me also saw the father" (John 14,9). Just as Torrance notes if Jesus is not essentially the same (one ousia) with the father (and thus completely God), we would not have the full revelation of God in Jesus. But when Jesus announced that he is truly this revelation means to see him, to see the father, to hear him means to hear the father as he is. Jesus Christ is the Son of the Father by its very nature, that is, by its essential reality and nature. Torrance comments in “Trinitarian Faith” on page 119: The father-son relationship falls perfectly and perfectly into one another in being God, which is eternal and at the same time exists for the father and the son. God is father just as he is eternally the father of the son and the son is God of God as he is eternally son of the father. There is perfect and eternal confidentiality between the father and the son, without any "distance" in being, time or knowledge among themselves.

Because the father and the son are one in essence, they are also one in doing (Action). Notice what Torrance wrote about this in the Christian teaching of God: There is an uninterrupted relationship between being and acting between the Son and the Father, and this relationship was embodied once and for all in our human existence in Jesus Christ. So there is no God behind the back of Jesus Christ, but only this God, whose face we see in the face of the Lord Jesus. There is no dark unfathomable god, any deity that we know nothing about, but that we can only tremble with while our guilty conscience paints hard stripes on its dignity.

This understanding of nature revealed to us in Jesus Christ (Essence) of God, played a crucial role in the process of officially determining the New Testament canon. No book would be considered for inclusion in the New Testament if it did not maintain the perfect unity of the father and son. So this truth and reality served as the key interpreter (ie hermeneutic) basic truth by which the content of the New Testament was determined for the Church. By understanding that the father and the son (including the mind) are one in nature and action, it helps us to understand the nature of grace. Grace is not a God-made substance to stand between God and man, but as Torrance describes it, it is "God's bestowal to us in his incarnate Son, in which the gift and the giver are inseparably a God." The greatness of God's saving grace is a person, Jesus Christ, because in, through and from him comes salvation.

The Triune God, the Eternal Light, is the source of all "enlightenment", both physically and spiritually. The father who called light has sent his son to be the light of the world, and the father and son send the spirit to bring enlightenment to all people. Although God «lives in an inaccessible light» (1 Tim. 6,16), he revealed himself to us through his spirit, in the "face" of his incarnated son, Jesus Christ (see 2 Corinthians 4,6). Even if we initially have to look suspiciously in order to "see" this overwhelming light, those who take it in soon realize that the darkness has been dispersed far and wide.

In the warmth of the light,

The nature of light, God and grace