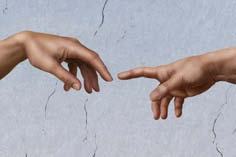 «Just come as you are!» It's a reminder that God sees everything: our best and worst, and yet he loves us. The call to come simply as you are is a reflection of the words of the apostle Paul in Romans: «For Christ, even when we were still weak, died for us atheists. Now hardly anyone dies for the sake of a just one; maybe for the sake of good he dares his life. But God shows his love for us in the fact that Christ died for us when we were still sinners » (Romans 5,6-8).

Many people today don't even think in terms of sin. Our modern and postmodern generation thinks more in terms of a feeling of "emptiness", "hopelessness" or "senselessness", and they see the cause of their inner struggle in a feeling of inferiority. They may try to love themselves as a means of becoming lovable, but more likely than not, they feel that they are completely finished, broken, and that they will never be safe again.

But God does not define us through our deficiencies and our failures; he sees our whole life: the good, the bad, the ugly and he loves us anyway. Even though God does not find it difficult to love us, we often have a hard time accepting that love. Deep inside we know that we are not worthy of this love. In the 15. In the 19th century, Martin Luther fought a difficult struggle to lead a morally perfect life, but he was constantly finding that he was failing, and in his frustration he finally discovered freedom in God's grace. Until then, Luther had identified with his sins - and found only despair - instead of identifying with Jesus, God's perfect and beloved Son, who took away the sins of the world, including the sins of Luther.

Even today, many people, even though they do not think in categories of sin, still have feelings of hopelessness and are full of doubts, which cause a deep feeling that one is not lovable. What they need to know is that God appreciates and loves them despite their emptiness, despite their worthlessness. God loves you too. Even if God hates sin, he does not hate you. God loves all people, even sinners, and he hates sin precisely because it hurts and destroys people.

"Come as you are" means that God is not waiting for you to get better before you come to him. He already loves you, despite what you've done. He has ensured a way out of everything that could separate you from him. He has ensured your escape from every prison of the human mind and heart.

What is it that holds you back from experiencing the love of God? Whatever it is, why do you not give this burden to Jesus, who is more than capable of carrying it for you?