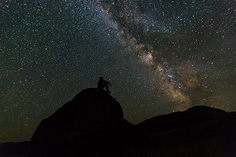 When Albert Einstein published his general theory of relativity in 1916, he changed the world of science forever. One of the most groundbreaking discoveries he made deals with the constant expansion of the universe. This astonishing fact reminds us not only of how big the universe is, but also of a statement by the psalmist: «Because the sky is high above the earth, he shows his grace over those who fear him. As far as the morning is from the evening, it lets us be our transgressions » (Psalm 103,11: 12).

Yes, God's grace is so incredibly real because of the sacrifice of his only son, our Lord Jesus. The formulation of the psalmist “So far the east is from the west” deliberately goes beyond our imagination on a scale that even exceeds the perceptible universe. As a result, no one can imagine the extent of our redemption in Christ, especially when you consider what that includes. Our sins separate us from God. But Christ's death on the cross changed everything. The gap between God and us is closed. God reconciled the world to himself in Christ.

We are invited to enter into his fellowship as into a family, into the perfect relationship with the Triune God for all eternity. He sends us the Holy Spirit, who helps us to approach him and put our life under his care so that we become like Christ.

Next time you look at the night sky, remember that God's grace surpasses all dimensions of the universe and that even the longest distances we know are small compared to the extent of his love for us.