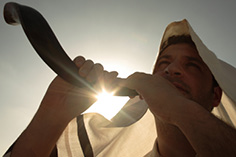 In September, the Jews celebrate the New Year's Day "Rosh Hashana", which means "head of the year" in Hebrew. It is part of the tradition of the Jews that they eat a piece of a fish head, symbolic of the head of the year and mutually with "Leschana towa", which means "To a good year!" means to greet. According to tradition, there is a connection between the festival of Rosh Hashana and the sixth day of the week of creation, on which God created man.
In the Hebrew text of the 3. Book of Moses 23,24 is given the day as "Sikron Terua", which means "memorial day with trumpet bubbles". Therefore, this festival is called in the German language «Trumpet Day».

Many rabbis teach that at Rosh Hashanah a shofar should be blasted at least 100 times, including a series of 30 painting to signal hope for the coming of the Messiah. According to the Jewish sources, there are three types of beeps that were blown on that day:

Ancient Israel originally used ram horns for their trumpets. But after a while, as we learn from Numbers 4, these were trumpeted (Trumpets) made of silver replaced. The use of trombones is mentioned 72 times in the Old Testament.

The trumpets were blown to alert in case of danger, to summon the people to a festive assembly to announce announcements, and as a call to worship. In times of war trombones were used to prepare the soldiers for their mission and then give the signal for combat use. Trumpets also announced the arrival of the king.

At the present time, some Christians celebrate the Trumpet Day as a feast day with a worship service and associate it with reference to future events, to Jesus' second coming or the rapture of the church.

Jesus is the lens through which we can correctly interpret the whole Bible. The Old Testament (which includes the Old Covenant) we now understand through the lens of the New Testament (with the New Covenant, which Jesus Christ has fully fulfilled). If we proceed in reverse order, we come to the conclusion, based on wrong conclusions, that the New Covenant would only begin with the return of Jesus. This assumption is a fundamental mistake. Some believe that we are in a transition period between the old and new covenants and are therefore obliged to keep the Hebrew festivals.
The old covenant existed only temporarily and this includes the trombone day. «By saying: A new covenant has made the first one an old one. But what grows old and is old is near the end » (Hebrews 8,17). It was used to announce the coming Messiah to people. The trumpet blowing to Rosh Hashana not only signals the beginning of the annual festival calendar in Israel, but also announces the message of this festival day: "Our King is coming!"

The festivals of Israel are primarily associated with the harvests. The “Passover” and the “Feast of Unleavened Bread” took place immediately before the first cereal festival “Feast of the First Yarrow”. Fifty days later, the Israelites celebrated the Festival of the Wheat Harvest, the "Festival of the Weeks" (Pentecost) and in autumn the big harvest festival, the “Tabernacle Festival”. In addition, the festivals have deep spiritual and prophetic meaning.

For me, the most important part of the trumpet day is how he points to Jesus and how Jesus did all of this when he first came. Jesus fulfilled the trumpet day through his incarnation, his work of reconciliation, his death and his resurrection. Through these "events in Christ's life", God not only fulfilled his covenant with Israel (the old covenant) but changed all the time forever. Jesus is the head of the year - the head, the lord of all time, especially because he created time. "He (Jesus) is the image of the invisible God, the firstborn before all creation. For everything that is in heaven and on earth is created in him, the visible and the invisible, be they thrones or rulers or powers or powers; it is all created by and for him. And he is above all, and everything is in him. And he is the head of the body, namely the church. He is the beginning, the firstborn from the dead, so that he is the first in everything. For it pleased God to let all abundance dwell in him and to reconcile everything to him, be it on earth or in heaven, by making peace through his blood on the cross » (Colossians 1,15: 20).

Jesus prevailed where the first Adam failed and he is the last Adam. Jesus is our Passover Lamb, our unleavened bread and our reconciliation. He is the one (and only one) who removed our sins. Jesus is our Sabbath, in which we find rest from sin.

As a lord of all time he now lives in you and you in him. The whole time you experience is sacred because you live the new life of Jesus Christ that you have in communion with him. Jesus, is your Redeemer, Savior, Savior, King and Lord. He has let the trumpet sound once and for all!