There is still much to write 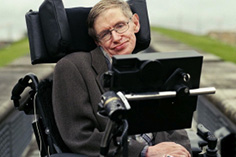 Some time ago, the respected and highly respected physicist and cosmologist Stephen Hawking died. Newsrooms often prepare obituaries far in advance to report in detail on the death of famous people in the case of the death of famous people - including Stephen Hawking. Most newspapers contained two to three pages of text with good photos. That so much has been written about him is in itself a tribute to someone whose research into the workings of the universe and his personal struggle against a crippling disease has deeply impressed us all.

But is death the end of a human life? Is there more? Of course, this is an age-old question that no scientific inquiry can answer. Someone has to return from the dead and tell us. The Bible says that Jesus did just that - and this is the foundation of the Christian faith. He rose from the dead to tell us that there is more to add to our life story than we can imagine. Death is more of a stop than a terminus. There is hope beyond death.

Whatever is written about your life, there is more to add. Let your story continue to be written by Jesus.

There is still much to write