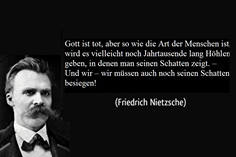 Friedrich Nietzsche (1844-1900) became known as "the ultimate atheist" for his derogatory criticism of Christianity. He claimed that Christian Scripture, especially because of its emphasis on love, was a by-product of decadence, corruption, and revenge. Instead of even starting to think that God's existence is possible, he announced with his famous saying "God is dead" that the great idea of ​​a god had died. He intended the traditional Christian belief (which he called the old dead belief) to be replaced by something radically new. When he heard of the news that "the old god was dead," he said, philosophers and free spirits like him would be enlightened by a new awakening. For Nietzsche, there was a new beginning in a society of "happy science", in which one was free from the repressive belief that robbed people of their joy through narrow limits.

How do we stand atheists?

Nietzsche's philosophy has motivated many people to adopt atheism. Even among Christians, there are some who welcome His teachings because they believe that they condemn a form of Christianity that pretends that God is dead. What they overlook is that Nietzsche considered the idea of ​​any god absurd and considered any kind of belief to be stupid and hurtful. His philosophy is in contrast to Biblical Christianity, which does not mean that we want to put ourselves above him or other atheists. Our calling is that we are human beings (including atheists) want to help understand that God is there for them too. We fulfill this calling by exemplifying a way of life towards others that is characterized by a joyful relationship with God - or as we say at the WKG, by living and passing on the good news.

You probably already have a sticker (as shown opposite) who makes fun of Nietzsche. What is not taken into account here is that Nietzsche wrote several poems a year before his mind was lost, indicating that he changed his view of God. Here is one of them:

No! Come back, with all your tortures!
To the last of the lonely. Oh come back!
All my tears streams are running towards you!
And my last heart flame You glows on it!
Oh come back, my unknown god! My pain! My last luck!
Misunderstandings about God and the Christian life

There seems to be no end to the misrepresentation of God that keeps sparking the flame of atheism. God is misrepresented as vengeful, imperative, and punitive rather than the god of love, mercy, and justice. The God who has revealed himself in Christ, who invites us to accept a life of faith in him and to leave the path of life that leads to death. Instead of leading the lives of a condemned and oppressed, Christian life is a joyful participation in the continuing work of Jesus, which the Bible says is that he did not come to judge the world but to save it (John 3,16: 17). To understand God and Christian life properly, it is important to understand the difference between God's judgments and judgments. God judges us not because he is against us, but because he is for us. Through his judgments, he points to ways that lead to eternal death - those are ways that lead us away from fellowship with him, through which we receive well-being and blessings thanks to his grace. Because God is love, his judgment is against everything that stands against us, his beloved. While human judgment is often understood as judgment, God's judgment shows us what leads to life compared to what leads to death. His judgments help us to escape judgment based on sin or evil. God sent His Son into the world to defeat the power of sin and to save us from its slavery and its worst consequence, eternal death. The Triune God wants us to recognize the only true freedom: Jesus Christ, the living truth that frees us. Contrary to Nietzsche's misconceptions, Christian life is not under the pressure of reprisals. Instead, it is a joyful life in and with Christ through the Holy Spirit. It includes our participation in what Jesus is doing. I personally like the explanation that some people derive from sports: Christianity is not a spectator sport. Unfortunately, even some people misread this and have made them press others to do something for their salvation. There is a big difference between doing good works for salvation (which draws the emphasis on us) and our participation in the works of Jesus, who is our salvation (which draws the emphasis on him).

You may have heard the expression "Christian atheist" before. It is used for people who claim to believe in God but know little about him and live as if they did not exist. A sincere believer can become a Christian atheist by ceasing to be a faithful follower of Jesus. You can plunge into activities like this (even those with a Christian label) that you become a part-time follower of Jesus - focus more on activities than on Christ. Then there are those who believe that God loves them and that they have a relationship with Him, but see no need to participate in the life of the Church. By sticking to this view, they reject it (perhaps unwittingly) their affiliation and active membership in the Body of Christ. However, while they trust God's guidance from time to time, they do not want him to take full control of their lives. They want God to be their co-pilot. Some prefer God to be their flight attendant, who is supposed to bring something requested every now and then. God is our pilot - he gives us the direction that leads us to real life. Truly, it is the way, the truth and the life.

Participation with God in the community of the Church

God calls the believers to lead many sons and daughters to glory with him (Heb. 2,10). He invites us to participate in his mission to the world by living and sharing the gospel. We do this together as members of the Body of Christ, the Church ("Service is a team sport!"). Nobody has all spiritual gifts, therefore all are needed. In the communion of the church we give and receive together - we build and strengthen each other. As the author of the letter to the Hebrews admonishes us, we do not leave our congregations (Heb. 10,25), but come together with others to do the work in which God has called us as a community of believers.

To rejoice in the real, eternal life with Christ

Jesus, the Son of God made man, sacrificed his life so that we should have “eternal life and full enough” (John 10,9: 11). It is not a life with guaranteed riches or good health. It doesn't always go without pain. Instead, we live in the knowledge that God loves us, has forgiven and accepted us as his adopted children. Instead of living under pressure and tightness, it is filled with hope, joy and certainty. It is a life in which we go ahead to become what God has set for us as followers of Jesus Christ through the Holy Spirit. God, who passed judgment on evil, condemned it on the cross of Christ. Therefore, there is no future for evil and the past has been given a new direction in which we can participate through faith. God has not allowed something to happen that he cannot reconcile. In fact, “every tear is wiped off, because God, in Christ and through the Holy Spirit,“ makes everything new ” (Revelation 21,4: 5). This, dear friends and employees, is the really good news! It says that God doesn't give up on anyone, even if you give up on him. The apostle John explains, "God is love" (1 John 4,8) - Love is his nature. God never stops loving us because if he did he would be contrary to his nature. Therefore, we can be encouraged knowing that God's love includes all people, whether they have lived or will live. This also affects Friedrich Nietzsche and all other atheists. We can hope that God's love also reached Nietzsche, who, shortly before the end of his life, experienced repentance and faith in what God intends to give to all people. Indeed, “everyone who calls on the name of the Lord will be saved” (Rom. 10,13). How wonderful that God never stops loving us.