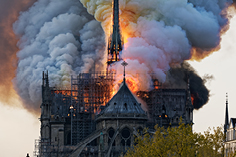 When the cathedral «Notre Dame» burned in Paris, not only in France was great mourning, but also throughout Europe and the rest of the world. Priceless items were destroyed by the flames. Witnesses to a 900-year story have been dissolved into smoke and ashes.

Some wonder if this is a warning sign to our society because it happened just in Holy Week? Because in Europe, churches and the "Christian heritage" are less and less appreciated and often even trampled.
What do you think of when you speak of a place of worship? Is it a cathedral, a church or chapel, a decorated hall or a beautiful place in nature? At the very beginning of his ministry, Jesus made a statement about what he thinks of “houses of God”. Shortly before the Passover time, he chased the merchants out of the temple and warned them not to make the temple a department store. "Then the Jews answered and said to him, What kind of sign are you showing us that you may do this? Jesus answered them: Break this temple, and in three days I will raise it up! Then the Jews said: This temple was built in 46 years, and you want to erect it in three days? » (John 2,18: 20). What was Jesus talking about? For the Jews, his answer was very confusing. Let us continue reading: «But he spoke of the temple of his body. When he rose from the dead, his disciples thought that he had said this to them, and they believed the scripture and the word that Jesus had spoken » (Verses 21-22).

Jesus' womb would be the real church. And his body was newly formed after he had been in the tomb for three days. He received a new body from God. Paul wrote that as God's children, we are part of this body. Peter wrote in his first letter that we should have stones built into this spiritual house alive.

This new church is much more valuable than any magnificent building and the special thing about it is that it cannot be destroyed! God has set up a huge "building program" that has been going on for many centuries. "So you are no longer guests and foreigners, but fellow citizens of the saints and companions of God, built on the foundations of the apostles and prophets, since Jesus Christ is the cornerstone on which the whole structure grows into a holy temple in the Lord. Through him you will also be built into a dwelling place of God in the Spirit » (Ephesians 2,19: 22). Every single building block has been chosen by God, he prepares it so that it fits exactly into the environment in which it is intended. Each stone has its special task and function! So every stone in this body is very valuable and precious!
When Jesus died on the cross and was then put into the grave, the disciples began a very difficult time. How does it go from here? Has our hope been in vain? Doubt spread and disappointment, though Jesus had informed her several times about his death. And then the great relief: Jesus is alive, he is risen. Jesus shows up in his new body many times, so that no doubt could arise. The disciples had become eyewitnesses testifying to the resurrection of Jesus and preaching forgiveness and renewal through the Spirit of God. The body of Jesus was here in new form here on earth.

God's Spirit forms individual building blocks that God calls for the new spiritual house of God. And this house is still growing. And just as God loves his son, he loves every single stone. "You too, as living stones, build yourself up to the spiritual house and the holy priesthood, to sacrifice spiritual sacrifices that are pleasing to God through Jesus Christ. That is why it is written: "Behold, I lay a chosen, precious cornerstone in Zion; and whoever believes in him should not be put to shame." Now for you who believe, it is precious. But for those who don't believe it is "the stone that the builders rejected; it has become the corner stone" (1 Peter 2,5:7).
Jesus renews you through his love every day, so that you fit into this new building for the glory of God. Now you only see what will become shadowy, but soon you will fully see the splendor of reality as Jesus comes in his glory and will introduce the new church to the world.