Matthew 5: The Sermon on the Mount 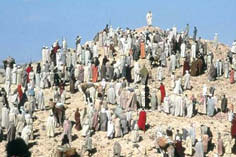 Jesus contrasts six ancient teachings with the new teachings. Six times he quotes the previous teaching, mostly from the Torah itself. Six times he explains that they are not enough. He shows a more demanding standard of justice.

Do not despise the others

"You have heard that the old people said:" You shall not kill [murder] "; but whoever kills shall be guilty of judgment » (V.21). This is a quote from the Torah, which also summarizes the civil laws. People heard it when the scriptures were read to them. In the time before the art of printing, people mostly heard the writing instead of reading it.

Who spoke the words of the law "to the elderly"? It was God himself on Mount Sinai. Jesus does not quote a distorted tradition of the Jews. He quotes the Torah. Then he sets the bid against a stricter standard: "But I tell you: who is angry with his brother is guilty of judgment" (V.22). Perhaps according to the Torah, this was actually the intention, but Jesus does not argue on this basis. He does not indicate who authorized him to teach. What he teaches is true for the simple reason that he is the one who says it.

We are judged because of our anger. Someone who wants to kill or wants someone else's death is a murderer in his heart, even if he can not or does not want to do it. However, not every anger is a sin. Jesus himself was sometimes angry. But Jesus says it clearly: Anyone who is angry is under the jurisdiction. The principle is in hard words; the exceptions are not listed. At this point, and elsewhere in the sermon, we find that Jesus formulates his demands extremely clearly. We can not take statements from the sermon and act as if there were no exceptions.

Jesus adds: "But whoever says to his brother: You uselessness! Is guilty of the high council; but whoever says: you fool! is guilty of hellish fire » (V.22). Jesus does not refer to new cases of the Jewish leaders here. It is more likely that he quotes “no use” an expression that has already been taught by the scribes. Next, Jesus says that the punishment for malicious attitudes goes well beyond that of the civil court judgment - it ultimately goes to the Last Judgment. Jesus himself called people "fools" (Matthew 23,17, with the same Greek word). We cannot use these terms as legalistic rules that must be followed literally. The point is to clarify something. The point is that we shouldn't despise other people. This principle goes beyond the purpose of the Torah because true righteousness characterizes the kingdom of God.

Jesus makes it clear through two parables: «Therefore: if you sacrifice your gift on the altar and there it comes to your mind that your brother has something against you, leave your gift there in front of the altar and go first and reconcile yourself with your brother, and then come and sacrifice Jesus lived at a time when the old covenant was still in force and his reaffirmation of the old covenant laws does not mean that they are still in force today. His parable indicates that interpersonal relationships are worth more than victims. If someone has something against you (whether authorized or not) then the other person should take the first step. If she doesn't, don't wait; take the initiative. Unfortunately, this is not always possible. Jesus does not give a new law, but explains the principle in clear words: Strive to be reconciled.

«Immediately get on with your opponent while you are still on the way, so that the opponent does not answer the judge and the judge the judge and you are thrown into prison. Truly, I tell you: you will not get out of there until you have paid the last penny » (Vv. 25-26). Again, it is not always possible to settle disputes outside of court. We shouldn't let accusers who put pressure on us get away either. Also, Jesus does not predict that we will never receive mercy before a civil court. As I said, we cannot make Jesus' words strict laws. Nor does he give us wise advice on how to avoid guilt. It is more important to him that we seek peace, because that is the way of true justice.

"You heard that it said:" You shouldn't commit adultery "" (V.27). God gave this commandment on Mount Sinai. But Jesus tells us: "Whoever looks at a woman to desire her has already committed adultery with her in his heart" (V.28). The 10th commandment banned coveting, but the 7th commandment did not. It prohibited "adultery" - behavior that could be regulated by civil law and punishment. Jesus does not try to consolidate his teaching through scripture. He doesn't have to do it. It is the living word and has more authority than the written word.

"It is also said:" Whoever divorces his wife should give her a divorce letter " (V.31). This refers to the passage in Deuteronomy 5: 24,1-4, which accepts the letter of divorce as an already established custom among the Israelites. This law did not allow a married woman to remarry with her first husband, but other than this rare situation, there were no restrictions. The law of Moses allowed divorce, but Jesus did not allow it.

"But I say to you: Whoever divorces his wife, except because of adultery, causes her to commit adultery; and whoever marries a divorced man commits adultery » (V.32). This is a tough statement - difficult to understand and difficult to implement. Let's say a bad man pushes his wife away for no reason. Then is she automatically a sinner? And is it a sin for another man to marry this divorce victim?

We would make a mistake if we interpreted Jesus' statement as an immutable law. Because Paul was shown by the Spirit that there is another legitimate exception to divorce (1 Corinthians 7,15). Although this is a study of the Sermon on the Mount, we should keep in mind that Matthew 5 does not cover the last word on divorce. What we see here is only part of the overall picture.

Jesus' statement here is a shocking statement that wants to make something clear - in this case, divorce is always linked to sin. God intended to have a life-long commitment in marriage, and we should strive to cling to her in the way he intended. Jesus did not try to talk about what to do when things are not going the way they should.

"You also heard that the old people said:" You should not swear a false oath and should take your oath to the Lord "" (V.33). These principles are taught in the Old Testament scriptures (4th Mo 30,3; 5th Mo 23,22). But what the Torah clearly allowed, Jesus did not: «But I tell you that you should not swear at all, neither by heaven, because it is God's throne; still with the earth, for it is the footstool of his feet; still near Jerusalem, because it is the city of the great king » (Vv. 34-35). Apparently, the Jewish leaders allowed to swear by relying on these things, perhaps to avoid pronouncing the holy name of God.

The principle is simple: honesty - amazingly made clear. Exceptions are allowed. Jesus himself went beyond a simple yes or no. He often said amen, amen. He said heaven and earth will go away, but his words would not. He called God to witness that he was telling the truth. Likewise, Paul used some affidavits in his letters instead of simply saying yes (Romans 1,9: 2; 1,23 Corinthians).

So we see again that we do not have to treat the expressive statements of the Sermon on the Mount as prohibitions to be obeyed literally. We should just be honest, but in certain situations we can especially affirm the truth of what we have said.

In a court, to use a modern example, we are allowed to "swear" that we are telling the truth and we can therefore call on God for help. It is petty to say that "an affidavit" is acceptable, but "swear" is not. In court these words are synonymous - and both are more than a yes.

Do not seek revenge

However, Jesus forbids what the Torah demands: "But I tell you that you should not resist the evil" (V. 39a). But Jesus himself opposed bad people. He drove money changers out of the temple. The apostles resisted false teachers. Paul defended himself by claiming his right as a Roman citizen when soldiers were to flagell him. Jesus' statement is again exaggerated. It is allowed to defend against bad people. Jesus allows us to take action against bad people, for example, by reporting crime to the police.

Jesus' next statement must also be seen as exaggerating. That does not mean that we can dismiss them as irrelevant. It is all about the understanding of the principle; we must allow it to challenge our behavior without developing a new code of law from these rules, assuming that exceptions are never allowed.

«If someone hits you on the right cheek, offer the other one too» (V. 39b). In certain circumstances, the best thing is to just walk away, like Peter did (Acts 12,9). It is also not wrong to defend yourself verbally like Paul (Acts 23,3). Jesus teaches us a principle and not a rule that must be strictly followed.

"And if someone wants to have a right with you and take your skirt, leave your coat too. And if someone forces you to go a mile, go two with them. Give to those who ask you and do not turn away from those who want to borrow something from you » (Vv. 40-42). If people sue you for 10.000 francs, you don't have to give them 20.000 francs. If someone steals your car, you don't have to give up your van. If a drunk asks you for CHF 10, you don't have to give him anything. Jesus' exaggerated statements are not about the fact that we have to allow other people to gain an advantage at our expense, nor that we have to reward them for it. Rather, the point is that we do not retaliate. Be careful to make peace; do not try to harm others.

"You heard that it said:" You shall love your neighbor "and hate your enemy" (V.43). The Torah commanded love and it ordered Israel to kill all Canaanites and punish all evildoers. «But I tell you: love your enemies and pray for those who persecute you» (V.44). Jesus teaches us another way, a way that does not occur in the world. Why? What is the model for all this rigorous justice?

«So that you are children of your Father in Heaven» (V. 45a). We are said to be like him and he loved his enemies so much that he sent his son to die for them. We cannot let our children die for our enemies, but we should love them and pray for them to be blessed. We cannot keep up with the yardstick that Jesus has set as a guide. But our repeated mistakes shouldn't stop us from trying anyway.

Jesus reminds us that God “lets the sun rise over evil and good and rains over the just and unjust” (V. 45b). He is kind to everyone.

«Because if you love those who love you, what wages will you have? Do the tax collectors not do the same? And if you are only friendly to your brothers, what are you special about? Don't the Gentiles do the same? ” (Vv. 46-47). We are called to do more than usual, more than unconverted people. Our inability to be perfect doesn't change our calling to strive for improvement.