What do you think about the word God? 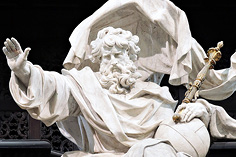 When a friend speaks to them of God, what comes to mind? Are you thinking of a lonely figure somewhere in heaven? Do you imagine an older gentleman with a flowing white beard and white robe? Or a director in a black business suit, as depicted in the movie "Bruce Almighty"? Or the portrayal of George Burns as an older guy in a Hawaiian shirt and tennis shoes?

Some people believe that God is actively involved in their lives, while others imagine God as detached and distant, who is out there somewhere and is watching us "from a distance". Then there is the idea of ​​an impotent god who is simply one of us, "like a stranger on a bus trying to find his way home," as in the song by Joan Osborne.

You see, the Bible presents God as a strict judge, giving out divine rewards and punishments to everyone - mostly punishments - based on how well one lived up to his high standard of perfect living. Many Christians think of God like that - a harsh God-Father who is ready to destroy everyone until his benevolent and compassionate son intervenes to give his life for the misguided people. But that is clearly not the biblical view of God.

How does the Bible represent God?

The Bible presents reality as God is through glasses: "The glasses of Jesus Christ". According to the Bible, Jesus Christ is the only perfect revelation of the Father: «Jesus says to him: I have been with you so long, and you do not know me, Philip? Whoever sees me sees the father. Then how do you say: "Show us the father?" (John 14,9) The letter to the Hebrews begins with the words: "After God spoke many times and in many ways to the fathers through the prophets, in the last few days he spoke to us through the son whom he appointed to the heir about everything through which he also made the world. He is the reflection of his glory and the image of his nature and carries all things with his strong word and has accomplished the purification from sins and has sat on the right hand of majesty in the highest » (Hebrews 1,1: 3).

God is not detached and uninvolved, one who watches us from afar. God is always, intimately and passionately connected with his creation and his creatures. For you, that means, God, the Father, Son, and Holy Spirit has called you into being out of love, and loves you throughout your life in God's saving way. He leads you to guide you to his ultimate purpose, eternal life as one of his beloved children.

When we imagine God in a biblical way, we should think of Jesus Christ, who is the perfect revelation of the Father. In Jesus Christ, all humanity - including you and me - was involved through the eternal bond of love and peace that connects Jesus to the Father. Let us learn to accept the truth with enthusiasm, to what God has already made us, as his children in Christ.

What do you think about the word God?