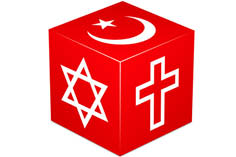 Do all paths lead to God? Some believe that all religions are a variation of the same theme - doing this or that and going to heaven. At first glance, it seems to be so. Hinduism promises the believer unity with an impersonal God. Getting into nirvana requires good works during many rebirths. Buddhism, which also promises nirvana, demands that the four noble truths and the eightfold path through many rebirths be kept.

Islam promises paradise - an eternal life full of sensual gratification and pleasure. In order to get there, the believer must adhere to the Articles of Faith and the Five Pillars of Islam. Leading a good life and sticking to traditions leads the Jews to eternal life together with the Messiah. None of these can save the trailer's rescue. There is always a big if - if you can follow the rules then you will get your reward. There is only one "religion" that can guarantee a good result after death, without at the same time including a reward for good deeds or a right way of life. Christianity is the only religion that promises and delivers salvation through the grace of God. Jesus is the only one who sets no conditions for salvation except the belief in Him as the Son of God who died for the sins of the world.

And so we come to the center of the crossbar of the cross of "Identity in Christ". The work of Christ, which is a work of redemption and replaced the works of men, is grace, the center of which is our faith. The grace of God is given to us as a gift, as a special favor and not as a reward for anything we have done. We are examples of the incredible richness of God's grace and goodness toward us, as is evident in everything he did for us through Christ Jesus (Ephesians 2).

But that can seem too easy. We always want to know "what's the catch"? "Don't we have to do something else?" In the past 2.000 years, grace has been misunderstood, misused, and many have added much to it. Due to gnawing doubts and suspicions that salvation by grace is too good to be true, the law grows. It came up at the beginning of [Christianity]. Paul gave the Galatians some advice on this matter. «All who want to be well looked at in the flesh require you to be circumcised just so that they are not persecuted for the sake of the cross of Christ [that it saves only]» (Galatians 6,12).

As believers in Jesus the Savior, we are under grace, not under the law (Romans 6,14 and Ephesians 2,8). What a blessing to be free from jumping tires and hurdles. We know that our sins and sinful natures are always covered by the grace of God. We don't have to do a demonstration for God, we don't need to earn our salvation. Do all paths lead to God? There are many paths, but only one path - and it is based on grace.