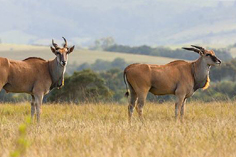 I never saw myself as closing your eyes to reality. But I admit that I switch to a channel about animal documentation, when the news is unbearable or feature films too banal to interest. There is something really good about watching the gamekeepers catching wild animals, if necessary, sometimes medically treating them and even moving entire flocks to another area where the environment gives them better living conditions. The game wardens often risk their lives when lions, hippos or rhinos must be stunned. Of course, they work in teams and every step is planned and executed with the necessary equipment. But sometimes it's up to scratch to see if a treatment ends well.

I remember an action that was particularly well planned and was successful. A team of experts set up a "trap" for a herd of eland that had to be relocated to another area. There she should find better pasture land and mix with another herd to improve her genetics. What really caught my eye was seeing how they managed to get a herd of strong, wild, fast-running animals to get into the waiting transporters. This was done by building fabric barriers that were held by poles. The animals were slowly locked in so that they could be gently pushed into the waiting transporters.

Some proved difficult to catch. However, the men did not give in until all animals were safely housed in the transporters. It was worthwhile to see how the animals were released to their new home, where they could live freely and better, even though they were not even aware of it.

I could see that there is a similarity between the men who save these animals and our Creator, who lovingly leads us on the path to his perfect eternal salvation. Unlike the Eland antelopes in the game reserve, we are aware of the blessings of God both in this life and in the promise of eternal life.

In the first chapter of his book, the prophet Isaiah complains of ignorance of God's people. The ox, he writes, knows his master and the donkey knows his master's crib; but God's own people don't know it and don't understand it (Isaiah 1,3). Perhaps this is why the Bible often calls us sheep, and it seems that sheep are not among the most intelligent animals. They often go their own way to find better feed, while the shepherd who knows the best leads them to the best pastureland. Some sheep like to make themselves comfortable on soft ground and turn the floor into a depression. As a result, they get stuck and can no longer stand up. So it is no wonder that the same prophet wrote in chapter 53,6: "They all went astray like sheep."

Exactly what we need Jesus describes himself as the "good shepherd" in John 10,11, 14 and. In the parable of the lost sheep (Luke 15) he paints the picture of the shepherd who comes home with the lost sheep on his shoulders, full of joy at finding him again. Our good shepherd does not hit us if we go astray like sheep. Through clear and careful promptings from the Holy Spirit, he leads us back on the right path.

How merciful Jesus was to Peter, who denied him three times! He said to him: "Feed my lambs" and "Feed my sheep". He invited the doubting Thomas: "Pass your finger here and see my hands, ... do not be incredulous, but believe". No harsh words or insults, just a gesture of forgiveness combined with irrefutable evidence of his resurrection. That was exactly what Thomas needed.

The same good shepherd knows exactly what we need to stay on his good pasture and he forgives us again and again if we make the same stupid mistakes. He loves us no matter where we get lost. It allows us to learn the lessons we need so much. Sometimes the lessons are painful, but he never gives up.

At the beginning of creation, God intended that humans should rule over all animals on this planet (Genesis 1:1,26). As we know, our great parents decided to go their own way, so that we cannot yet see that everything is subject to people (Hebrews 2,8).

When Jesus returns to restore all things, then the people will receive the dominion God intended them to be in the beginning.

The gamekeepers who were shown on the TV show at their work had a real interest in improving the lives of the wild animals there. It takes a great deal of resourcefulness to circle the animals without hurting them. The obvious joy and satisfaction they experienced through the successful action was shown in the bright faces and the mutual shaking hands.

But can it be compared to the joy and true happiness that will be when Jesus the Good Shepherd completes the "rescue operation" in his kingdom? Can one compare the resettlement of a few eland antelopes, who will be fine for a few years, with the saving of many billions of people for all eternity? Absolutely no way!