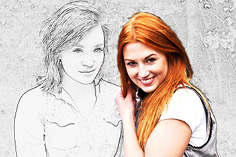 There are still a few weeks left before we celebrate the death and resurrection of Jesus. Two things happened to us when Jesus died and was raised. The first is that we died with [in] him. And the second thing is that we were raised with him.

The apostle Paul puts it this way: «If you are now raised up with Christ, look for what is above, where Christ is, sitting on the right hand of God. Seek what is above, not what is on earth. Because you died, and your life is hidden with Christ in God. But if Christ, your life, is revealed, then you will also be revealed with him in glory » (Colossians 3,1: 4).

When Christ died on the cross for our sins, all humanity died there, including you and me, in a spiritual sense. Christ died as our representative, in our place. But not merely as our substitute, he died and stood up as our representative [representative] from the dead. This means that when he died and was raised, we died with him and were raised with him. It means that the Father accepts us on the basis of what we are in Christ, his beloved Son. Jesus represents us before the Father in everything we do so that it is no longer we who do it, but Christ in us. In Jesus we were liberated from the power of sin and its punishment. And in Jesus, we have a new life in him and the Father through the Holy Spirit. The Bible calls it born again or from above. We were born from above through the power of the Holy Spirit to live a full life in a new spiritual dimension.

According to the verse we have read, as well as several other verses, we live with Christ in a heavenly kingdom. The old self died and a new self came to life. They are now a new creation in Christ. The exciting truth of being a new creation in Christ is that we are now identified with him and he with us. We should never consider ourselves as separate, away from Christ. Our life is hidden with Christ in God. We are thoroughly identified with Christ. Our life is in him. He is our life. We are one with him. We live in it. We are not just earthly inhabitants; we are also inhabitants of the sky. I like to describe it as living in two time zones - the temporary, physical, and the eternal, celestial time zones. It's easy to say those things. It is harder to see them. But they are true, even though we struggle with all the daily problems we face.

Paul asks us not to look at the visible, but to concentrate on the invisible: «That is why we do not get tired; but if our outer person also decays, the inner one is renewed from day to day. Because our affliction, which is temporal and light, creates an eternal and overwhelming glory, us, which we do not see on the visible, but on the invisible. Because what is visible is temporal; but what is invisible is eternal » (2 Corinthians 4,16: 18).

That's exactly the point. That is the essence of faith. Seeing this new reality of who you are in Christ changes all of your thinking, including what you are going through right now. When you see Jesus living within you, it makes a huge difference in how you are able to cope with the affairs of this present life.