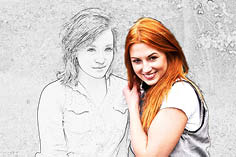 I find it amusing when people explain: "If I can't see it, I won't believe it." I often hear that said when people doubt that God exists or that He includes all people in His grace and mercy. In order not to cause offense, I point out that we see neither magnetism nor electricity, but we know from their effects that they exist. The same applies to wind, gravity, sound and even thought. In this way we experience what is called "imageless knowledge". I like to point out such knowledge as "invisible visibility."

Just relying on our eyesight, for years we could only speculate about what was in the sky. With the help of telescopes (such as the Hubble Telescope) we know a lot more today. What was once "invisible" to us is now visible. But not everything that exists is visible. Dark matter e.g. B. does not emit light or heat. It is invisible to our telescopes. However, the scientists know that dark matter exists because they have discovered its gravitational effects. A quark is a tiny speculative particle that forms protons and neutrons in the nucleus of the atoms. With gluons, quarks also form more exotic hadrons, such as mesons. Although none of these components of an atom have ever been observed, scientists have demonstrated their effects.

There is no microscope or telescope through which God can be seen, as the Scripture in John 1,18 tells us: God is invisible: «No man has ever seen God. But his only son, who knows the father well, showed us who God is. » With physical aids, there is no way to "prove" God's existence. But we believe that God exists because we have experienced the effects of His unconditional, all-encompassing love. This love is, of course, most personal, intense and concrete revealed in Jesus Christ. In Jesus we see what his apostles concluded: God is love. Love, which cannot be seen in itself, is God's nature, motivation and purpose. As TF Torrance puts it:

«The constant and incessant outflow of God's love, which has no other reason for its action than love, which is God, is therefore poured out without regard to the person and regardless of their reactions» (Christian Theology and Scientific Culture, p. 84).

While we cannot fully explain the invisible, such as love or grace, we do know that it exists because what we see is partially present. Note, I use the word "partially". We don't want to fall into the trap of the conceit that the visible explains the invisible. TF Torrance, who studied theology and science, finds that the opposite is true; the invisible explains the visible. To explain this, he uses the parable of the workers in the vineyard (Matthew 20,1: 16) where the vineyard owner hires workers all day to work in the fields. At the end of the day, every worker is paid the same wages, even if some have worked hard all day and others have only worked for a few hours. To most workers, this seems unfair. How could someone who only worked for an hour get the same wages as someone who worked all day?

Torrance points out that fundamentalist and liberal exegetes miss the point of Jesus' parable, which deals not with wages and justice, but with God's unconditional, generous and powerful grace. This grace is not based on how long we worked, how long we believed, how much we studied, or how obedient we were. God's grace is based entirely on who God is. With this parable, Jesus makes the "invisible" nature of God's grace "visible", who, unlike us, sees and does things. God's kingdom is not about how much we earn, but about God's generous generosity.

Jesus' parable tells us that God offers His wonderful grace to all people. And while everyone is offered the gift in the same measure, some immediately choose to live in grace in this reality and thus have the opportunity to enjoy it longer than those who have not yet made that choice. The gift of grace is for everyone. What the individual does with it is very different. When we live in God's grace, what was invisible to us has become visible.

The invisibility of God's grace makes them no less real. God gave ourselves to us so that we can know and love him and receive his forgiveness and enter into a relationship with him as father, son and holy spirit. We live in faith and not in looking. We have experienced his will in our life, in our thinking and acting. We know that God is love because we know who he is in Jesus Christ who "revealed" it to us. Just like in John 1,18 (New Geneva translation) is written:
«Nobody has ever seen God. The only son has revealed it to us, he who is himself God and sits at the side of the father. » We feel the power of God's grace as we experience His intention to forgive and love - to give us the wonderful gift of His grace. Just as Paul did in Philippians 2,13 (New Geneva translation) expresses: "God himself is at work in you and not only prepares you, but also enables you to do what he likes."

Living in His grace,