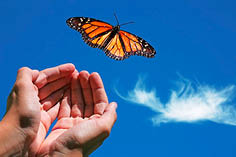 In the film As Good as It Gets Jack Nicholson plays a rather outrageous person. He is both emotionally and socially disturbed. He has no friends and there is little hope for him until he meets a young woman who serves him in his local bar. Unlike others before her, she went through difficult times. So she shows him some attention, he reacts in the same way, and they get closer and closer in the course of the film. Just as the young waitress Jack Nicholson showed a certain degree of benevolence that he did not deserve, so on our Christian path we encounter God's mercy. Miguel de Cervantes, the great Spanish author of Don Quixote, wrote that "under the attributes of God his mercy shines far brighter than his justice".

Grace is a gift that we don't deserve. We tend to hug a friend who is going through a bad time of his life. Maybe we even whisper in his ear: "Everything will be fine." Theologically speaking, we are correct with such a statement. However difficult the situation may be, only Christians can say that things will turn out well and God's mercy shines brightly becomes.

"He does not deal with us according to our sins and does not reward us for our iniquity. Because as high as the sky is above the earth, he shows his grace over those who fear him. As far as morning is from evening, it lets us be our transgressions. As a father has mercy on children, so the Lord has mercy on those who fear him. Because he knows what we are; he remembers that we are dust » (Psalm 103,10: 14).

During a severe drought in the country, God commanded the prophet Elijah to go to the Krit river to drink, and God sent the ravens to provide him with food (2 Kings 17,1: 4). God took care of his servant.

God will take care of us from the fullness of his wealth. So Paul wrote to the Church of Philippi: "My God will remedy all your want after his wealth in glory in Christ Jesus" (Philippians 4,19). That applied to the Philippians and it also applies to us. Jesus encouraged his audience in the Sermon on the Mount:

God also proved that he looked after Elisha when he needed help. King Ben-Hadad had deployed Syria's armies against Israel several times. But every time he attacked, the armies of Israel were somehow prepared for his advance. He thought there was a spy in the camp, so he gathered his generals and researched: "Who is the spy among us?" One replied: "My lord, it is the prophet Elisha. He has the knowledge before the king himself knows what he's up to. " So King Ben-Hadad ordered his armies to advance to Dotan, the home town of Elisa. Can we imagine what that must have looked like? "Hail, King Ben-Hadad! Where are you going? "The king would answer:" We will capture this little prophet Elisha. " When he came to Dotan, his large army surrounded the city of the Prophet. Elisha’s young servant went out to fetch water, and when he saw the great army, he panicked and ran back to Elisha and said, “Lord, the armies of Syria are against us. What should we do? "Elisha said:" Do not be afraid, because those who are with us are more than those who are with them! " The young man must have thought: "Great, we are surrounded by a huge army and there is a madman in here with me." But Elisha prayed: "Lord, open the young man's eyes so that he can see!" God opened his eyes and saw that the army of Syria was surrounded by the hosts of the LORD and a great number of fiery steeds and chariots (2 Kings 6,8: 17).

The message of Holy Scripture is certainly this: we have the occasional feeling of lost the courage on our journey to life and circumstances have driven us to the abyss of despair. Let us confess that we are unable to help ourselves. Then we can rely on Jesus and His message to take care of us. He will give us joy and victory. He gives us true eternal life, as beloved brother, beloved sister. Let's never forget that. Let us trust him!