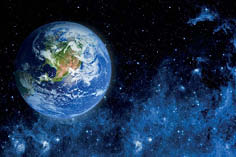 It reminded me of scenes from a science fiction film when I heard about the discovery of an earth-like planet called Proxima Centauri. It is in the orbit of the red fixed star Proxima Centauri. However, it is unlikely that we will discover extraterrestrial life there (at a distance of 40 trillion kilometers!). However, people will always ask themselves whether there is human-like life outside of our earth. For the disciples of Jesus this was not a question - they were witnesses of Jesus' ascension and therefore knew with absolute certainty that man Jesus now lives in his new body in an extraterrestrial world, which the Scriptures call "heaven" - a world that has absolutely nothing in common with the visible "heavenly worlds" that we call the universe.

It is important to know that Jesus Christ is completely divine (the Eternal Son of God) is, but also completely human (the now glorified man Jesus) is and remains. As CS Lewis wrote: “The central miracle that Christians stand for is the Incarnation (Incarnation) »- a miracle that will last forever. Jesus is omnipresent in his divinity, but in his continuing human existence he lives physically in heaven, where he serves as our high priest and waits for his physical and therefore visible return to planet earth. Jesus is God-Man and Lord of all creation. Paul writes in Romans 11,36:1,8: "From him and through him and to him are all things." John quotes Jesus in Revelation as the "A and O" who is there, who was there and who is coming. Isaiah also declares that Jesus is "the high and sublime" who "lives forever." (lives)" (Isaiah 57,15). Jesus Christ, the exalted, holy and eternal Lord, is the one who carries out his father's plan, which consists in reconciling the world.

Note the statement in John 3,17:
"For God did not send his son into the world to judge the world, but to save the world through him." Anyone who claims that Jesus came to condemn the world in the sense of condemning or punishing is simply wrong. Those who divide humanity into two groups - one that is destined to be saved by God and another that is destined to be condemned - are also wrong. If Johannes (perhaps quoting Jesus) says that our Lord came to save "the world", then it refers to all of humanity and not just to a specific group. Let's look at the following verses:

I can only emphasize that Jesus is Lord and Savior of the whole world and even his entire creation. This is made clear by Paul in the Letter to the Romans, chapter 8, and John throughout the book of Revelation. What the Father has created through the Son and the Holy Spirit cannot be broken up into individual pieces. Augustine remarked: "The outer works of God [regarding his creation] are indivisible." The triune God who is the One acts as one. His will is a will and undivided.

Unfortunately, some people teach that Jesus' shed blood only redeems those whom God has appointed for salvation. The rest, they say, are destined to be damned by God. The core of this understanding is that God's purpose and purpose are shared in relation to his creation. However, there is no Bible verse that teaches this view; any claim of this kind is misinterpretation and ignores the key to the whole, which consists in the knowledge of the nature, character, and purpose of the Triune God revealed to us in Jesus.

If it were true that Jesus intended to both save and condemn, we would have to conclude that Jesus did not represent the Father correctly and that we cannot know God as He really is. We should also come to the conclusion that there is an inherent disunity in the Trinity and that Jesus has only revealed one "side" of God. The result would be that we would not know which "side" of God we can trust - should we trust the side we see in Jesus or the hidden side in the Father and / or the Holy Spirit? These quirky views contradict John's gospel, where Jesus clearly proclaims that He has fully and correctly publicized the invisible Father. The God who was revealed by and in Jesus is the One who comes to save humanity, not to condemn it. In and through Jesus (our eternal advocate and high priest), God gives us the power to become his eternal children. His nature changes our nature and this gives us the accomplishment in Christ that we ourselves could never achieve. This accomplishment involves an eternal, perfect relationship and communion with the transcendent, holy Creator God, which no creature can achieve on its own - not even Adam and Eve could have done before the Fall. By grace we have fellowship with the triune God who stands above space and time, who was, is and will be eternal. In this community our bodies and souls are renewed by God; we get a new identity and an eternal purpose. In our unity and communion with God, we are neither minimized, absorbed, or transformed into something that we are not. Rather, by participating in the human being risen and raised by the Holy Spirit in Christ, we are brought into the fullness and highest perfection of our own human being with him.

We live in the present - within the boundaries of space and time. But through our unity with Christ through the Holy Spirit, we penetrate the space-time barrier, for Paul writes in Ephesians 2,6 that we are already in the risen God-man Jesus Christ in Heaven. During our transient existence here on earth we are bound to time and space. In a way we can not fully understand, we are also citizens of heaven for all eternity. Although we live in the present, we already share in the life, death, resurrection, and ascension of Jesus through the Holy Spirit. We are already connected to eternity.

Because this is real to us, we convincingly proclaim the present reign of our eternal God. From this position, we look forward expectantly to the coming fullness of the Kingdom of God, where we will live forever in union and communion with our Lord. Let us rejoice over God's plan for eternity.