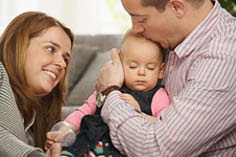 This sounds like something in everyday life:
"You have to get up now, it's almost seven o'clock!"
«Now it has to be done!»
"Made the same mistake again, learned nothing yet?"
"You can't run away now, you hated yourself!"

We see this pattern very clearly from the discussion Jesus had with the Jews. Now Jesus said to the Jews who had believed in him:

"If you stay in my word, you are really my disciples and you will recognize the truth, and the truth will set you free." Then they replied to him: "We are Abraham's descendants and have never served anyone as servants; how can you say: you will be free? Jesus replied to them: «Truly, truly I say to you, everyone who does sin is a slave to sin. But the servant does not stay in the house forever, while the son stays in it forever. So if the son made you free, then you will really be free " (John 8,31: 36).

When Jesus began to speak of freedom, his listeners immediately drew a line to the situation of a servant or a slave. A slave is the opposite of freedom, so to speak. He has to give up a lot, he is very limited. But Jesus distracts his listeners from their image of freedom. The Jews thought that they had always been free, and at the time of Jesus they were a land occupied by the Romans and had often been under foreign rule before and even in slavery.

So what Jesus meant by freedom was something quite different from what the audience understood. Slavery has some similarities to sin. He who sins is a servant of sin. Those who want to live in freedom must be freed from the burden of sin. In this direction, Jesus sees freedom. Freedom is something that comes from Jesus, what he enables, what he conveys, what he achieves. The conclusion would be that Jesus himself embodies the freedom that he is absolutely free. You can not give freedom if you are not free yourself. So if we better understand the nature of Jesus, we will also understand freedom better. A striking passage shows us what the fundamental nature of Jesus was and is.

"Such an attitude dwells in all of you, as it also existed in Christ Jesus; for although he is God's figure (divine nature or nature), he did not see equality with God as a robbery to be held by force (inalienable, precious property); no he said himself (of his glory) by assuming the form of a servant, entering completely into human nature and being invented in his physical nature as a human being " (Pilippers 2,5–7).

A prominent feature of Jesus' nature was his renunciation of his divine status. He "released" his glory and voluntarily renounced this power and honor. He gave up this precious possession and that is precisely what qualified him to be the Redeemer, one who resolves, who liberates, who makes freedom possible, who can help others to freedom. This waiver of privilege is a very important characteristic of freedom. I had to deal with this fact more deeply. Two examples from Paul helped me with this.

"Don't you know that those who run in the racetrack all run, but only one receives the victory price? Now run in such a way that you can get it! But everyone who wants to take part in the competition lies down Abstinence in all relationships, those to receive a transient wreath, but we an imperishable " (1 Corinthians 9,24: 25).

A runner has set a goal and he wants to achieve it. We are also involved in this run and a waiver is necessary. (The translation Hope for All speaks in this passage of renunciation) It is not only about little renunciation, but about "abstinence in all relationships". Just as Jesus renounced a great deal in order to be able to pass on freedom, so we are called on to renounce many things so that we can also pass on freedom. We have been called to a new path of life that leads to an imperishable wreath that remains forever; to a glory that will never end or go away. The second example is closely related to the first. It is described in the same chapter.

Here Paul describes himself as a free man! He describes himself as one who has seen Jesus, one who acts on behalf of this liberator and who also has clearly visible results. And in the following verses he describes a right, a prerogative, which he, like all other apostles and preachers, has, namely that he makes his living by preaching the gospel, that he is entitled to an income. (Verse 14) Paul has renounced this privilege. Through this waiver, he created a free space, so he felt free and could call himself a free person. This decision made him more independent. He has implemented this regulation with all municipalities with the exception of the municipality in Philippi. He allowed this community to take care of his physical well-being. In this section, however, we now find a place that seems somewhat strange.

Paul, as a free man, speaks here of a compulsion, of something he had to do! How was that possible? Has he seen the principle of freedom unclear? I think rather that he wanted to bring us closer to freedom through his example. Let's read further in:

"Because only if I do this out of my own free will, I have (Right to) wages; but if I do it involuntarily, it is only a stewardship that I am entrusted with. So what is my wages? In that, as the preacher of the message of salvation, I offer it free of charge, so that I do not exercise my right to preach the message of salvation. Because although I am independent of all people (free), I made myself a servant to all to win the majority of them. But I do all this for the sake of the healing message, so that I too can share in it " (1 Corinthians 9,17: 19-23 and).

Paul was commissioned by God, and he knew perfectly well that he was being committed by God to do so; he had to do it, he could not sneak away in this matter. He saw himself in this task as a steward or administrator without claim to pay. In this situation, however, Paul has gained a free space, he saw despite this compulsion a large room for freedom. He refrained from compensation for his work. He even made himself a servant or slave. He adapted to the circumstances; and the people to whom he proclaimed the gospel. By renouncing compensation, he has been able to reach many more people. The people who heard his message clearly saw that the message was not an end in itself, enrichment or deceit. From the outside, Paul may have looked like someone who has been under constant pressure and obligation. But inside Paul was not bound, he was independent, he was free. How did that happen? Let us return for a moment to the first scripture we have read together.

"Jesus answered them:" Truly, truly I say to you: everyone who commits sin is a servant of sin. But the servant does not stay in the house forever, while the son remains in it forever " (John 8,34: 35).

What did Jesus mean by "house" here? What does a house mean to him? A house conveys security. Let us think of Jesus' statement that in his father's house many apartments are being prepared for the children of God. (John 14) Paul knew that he was a child of God, he was no longer a slave to sin. In this position he was safe (Sealed?) His waiver of compensation for his job brought him much closer to God and the security that only God can convey. Paul worked hard for this freedom. Abandoning a privilege was important to Paul because it gave him divine freedom, which was shown by God's security. Paul experienced this security in his earthly life and thanked God again and again for it and in his letters with the words "In Christ" pointed out. He knew profoundly that divine freedom was only possible through Jesus' renunciation of his divine state.

A renunciation of love for one's neighbor is the key to the freedom that Jesus meant.

This fact must become clearer to us every day as well. Jesus, the apostles and the first Christians have left us an example. They have seen that their renunciation will draw wide circles. Many people were touched by the renunciation of love for others. They have listened to the message, they have accepted the divine freedom, because they have looked into the future, as Paul put it:

"... that she herself, the creation, will be freed from the bondage of transience to Freedom which the children of God will have in the state of glorification. We know that the entire creation still sighs everywhere and is waiting for a new birth with pain. But not only them, but also ourselves, who already have the spirit as a first gift, also sigh inside when we wait (becoming manifest) of sonship, namely the redemption of our life " (Romans 8,21-23).

God grants his children this freedom. It is a very special share that God's children receive. The renunciation of God's children from charity is more than compensated for by the security, the calm, the serenity that comes from God. If a person lacks this sense of security, then he seeks independence, disembarkation disguised as emancipation. He wants to decide for himself and calls that freedom. How much evil has been born of it. Suffering, distress and emptiness that has arisen from a misunderstanding of freedom.

"Like newborn children, craves sensible, unadulterated milk (we could call this milk freedom) so that you can grow into bliss through it if you felt otherwise that the Lord is kind. Come to him, the living stone, which is rejected by men, but chosen before God, is precious, and let yourself be built like living stones as a spiritual house (where this security comes into play) to a holy priesthood to make spiritual sacrifices (that would be the waiver) that are pleasant to God through Jesus Christ! " (1 Peter 2,2: 6).

If we seek divine freedom, we grow in that grace and knowledge.

Finally, I would like to quote two sentences from the article from which I found the inspiration for this sermon: «Freedom is not the absence of constraints, but the ability to do without out of love for one's neighbor. Anyone who defines freedom as the absence of coercion prevents people from resting in security and programs disappointment.

Freedom is more than the absence of constraints