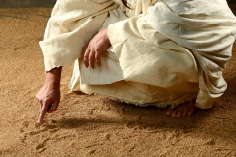 Living in grace means rejecting sin, not tolerating or accepting it. God is against sin - he hates it. He refused to leave us in our sinful condition and sent his son to release us from her and its effects.

When Jesus spoke to a woman who committed adultery, he said to her: «I will not judge you either, Jesus replied. You can go, but don't sin anymore! » (John 8,11 Hope for All). Jesus' statement shows his contempt for sin and conveys a grace that confronts sin with redeeming love. It would be a tragic mistake to see Jesus' willingness to become our Savior as tolerance for sin. The Son of God became one of us precisely because he was completely intolerant of the deceptive and destructive power of sin. Instead of accepting our sin, he took it upon himself and subjected it to God's judgment. Through his self-sacrifice, the punishment, the death that sin brings over us, was canceled.

When we look around the fallen world we live in and when we look into our own lives, it is obvious that God allows sin. However, the Bible clearly states that God hates sin. Why? Because of the damage done to us. Sin hurts us - it hurts our relationship with God and with others; it prevents us from living in the truth and fullness of who we are, our loved ones. In dealing with our sin, which was removed in and through Jesus, God does not immediately free us from all the enslaving consequences of sin. But that doesn't mean that His grace allows us to continue to sin. God's grace is not his passive tolerance of sin.

As Christians, we live under grace - freed from the ultimate punishments of sin for Jesus' sacrifice. As workers with Christ, we teach and praise grace in a way that gives people hope and a clear picture of God as their loving, forgiving father. But this message comes with a warning - remember the apostle Paul's question: "Is God's infinitely rich goodness, patience and faithfulness so little worth to you? Don't you see that it is precisely this kindness that wants to make you turn around? » (Romans 2,4 Hope for All). He also said: "What do we want to say about this? Shall we persist in sin so that grace may become all the more powerful? That is far away! We died of sin. How can we still live in it? » (Romans 6,1-2).

The truth of God's love should never encourage us to want to remain in our sin. Grace is God's provision in Jesus not only to free us from the guilt and shame of sin, but also from its distorting, enslaving power. As Jesus said: "He who sins is a slave to sin" (John 8,34). Paul warned: “Don't you know? Whoever you make yourself servants to obey him, you are his servants and you obey him - either as servants of sin to death or as servants of obedience to justice » (Romans 6,16). Sin is a serious matter because it enslaves us to the influence of evil.

This understanding of sin and its consequences does not lead us to accumulate words of condemnation on people. Instead, as Paul remarked, our words should: «Speak kindly to everyone; everything you say should be good and helpful. Make an effort to find the right words for everyone » (Colossians 4,6 Hope for All). Our words should convey hope and tell both God's forgiveness of sins in Christ and his victory over all evil. Only from the one without speaking about the other is a distortion of the message of grace. As Paul notes, in His grace God will never make us enslaved to evil: "But thank God: You were slaves to sin, but have now become obedient to the form of teaching to which you have been given" (Romans 6,17).

As we grow in understanding the truth of God's grace, we understand more and more why God abhors sin. It damages and hurts his creation. It destroys the right relationships with others and slanders the character of God with lies about God that undermine him and a trusting relationship with God. What do we do when we see a loved one sin? We don't judge him, but we hate the sinful behavior that harms him and maybe others. We hope and pray that Jesus, our beloved, will be freed from his sin by the life that he has sacrificed for him.

Paul is a powerful example of what God's love does in a person's life. Paul persecuted Christians violently before his conversion. He stood by when Stephen was martyred (Acts 7,54: 60). The Bible describes his attitude: "Saul was pleased with his death" (Acts 8,1). Because he was aware of the enormous grace he received for the terrible sins of his past, grace remained a big issue in Paul's life. He fulfilled his calling to serve Jesus: "But I do not pay attention to my life if I just complete my course and do the office that I received from the Lord Jesus to testify the gospel of the grace of God" (Acts 20,24).
In Paul's writings we find an interweaving of grace and truth in what he taught under the inspiration of the Holy Spirit. We also see that God radically transformed Paul from a bad-tempered legalist who persecuted Christians to a humble servant of Jesus. He was aware of his own sin and God's mercy when he accepted him as his child. Paul embraced God's grace and devoted all of his life to preaching, regardless of the cost.

Following Paul's example, our conversations with others should be grounded in God's amazing grace for all sinners. Our words are intended to show that we live a life independent of sin in God's firm teaching. "He who is born of God does no sin; for God's children remain in him and cannot sin; because they were born of God » (1 John 3,9).

If you meet people who live contrary to God's goodness instead of condemning them, you should treat them with meekness: «But a servant of the Lord should not be contentious, but friendly towards everyone, adept at teaching, one who endures evil can and with meekness rebukes the unruly. Perhaps God will help them repent to know the truth » (2 Tim. 2,24: 25).

Like Paul, your fellow human beings need a real encounter with Jesus. You can serve such an encounter in which your behavior corresponds to the nature of Jesus Christ.