Jesus, the only way? 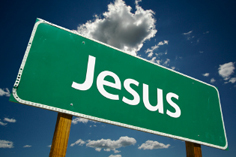 Some people reject the Christian conviction because salvation is possible only through Jesus Christ. In our pluralistic society tolerance is expected, even demanded, and the concept of religious freedom, which allows all religions, is sometimes interpreted as all religions are ultimately the same.

All roads lead to the same God. Some people say that as if they were already on the road and have now returned from the goal of this trip. Such people are not tolerant of those narrow-minded people who believe there is only one way and reject evangelization. After all, they claim that this is an insulting attempt to change other people's beliefs. But they themselves want to change the faith of those people who believe in only one way. How is that? Does the Christian faith teach that Jesus is the only way to salvation?

Most religions are exclusive. Orthodox Jews claim to have the true path. Muslims claim to know the best revelation of God. Hindus believe they are right and Buddhists believe that too. Even the modern pluralist believes that pluralism is more correct than other ideas.

All roads do not lead to the same God. The different religions even describe different gods. The Hindus have multiple deities and describe salvation as a return of nothingness. The Muslims, on the other hand, emphasize monotheism and heavenly rewards. Neither Muslim nor Hindu would agree, their paths led to the same goal. They would rather fight than change this attitude. The Western pluralists would be dismissed as condescending and uninformed people. But an insult or even an attack on the religions is exactly what the pluralists do not want. We believe the Christian message is right and at the same time allow people to disbelieve it. As we understand it, faith requires the freedom to let people believe in it, not to believe in it. But even if we are committed to the right of man to decide what he wants to believe in, that does not mean that we believe that all religions are true. To allow other people to believe in what they want does not mean that we should stop believing in it because Jesus is the only way to salvation.

The first disciples of Jesus tell us that he claims to be the only way to God. He said you couldn't be in the Kingdom of God if you didn't follow him (Matthew 7,26: 27) and we are not with him in eternity if we deny him (Matthew 10,32: 33). Jesus also said the following: “For the Father judges no one, but has given all judgment to the Son so that they all honor the Son as they honor the Father. Whoever does not honor the son does not honor the father who sent him ” (John 5,22: 23). Jesus claimed because he is the exclusive way of truth and redemption and the people who reject him also reject God.

In John 8,12:14,6 he says "I am the light of the world" and in John 7 it says "[] I am the way and the truth and the life; no one comes to the father except through me. If you have recognized me, you will also recognize my father. And from now on you know him and have seen him. » Jesus himself said that people who claim that there are other ways of salvation are wrong. Peter was just as clear when he spoke to the Jewish rulers: "And in no other is salvation, nor is there any other name under heaven given to men by which we shall be saved" (Acts 4,12).

Paul also made it clear when he said that people who do not know Christ are dead by their transgressions and sins (Ephesians 2,1). They had no hope and despite their religious belief, they didn't have God (V. 12). He said that there is only one mediator, only one way to God (1 Timothy 2,5). Jesus was the ransom that everyone needed (1 Timothy 4,10). If there were any other path that would lead to salvation, God would have created it (Galatians 3,21). The world is reconciled to God through Christ (Colossians 1,20: 22). Paul was called to spread the good news among the Gentiles. Your religion, he said, was worthless (Acts 14,15). The letter to the Hebrews already says that there is no better way than Christ. Unlike all other ways, it is effective (Hebrews 10,11). This is not a relative advantage, but a difference that makes all or nothing. The Christian teaching of exclusive salvation is based on what Jesus himself said and what the Bible teaches us, and is closely related to who Jesus is and our need for grace.

Our need for grace

The Bible says that Jesus is the Son of God in a special way. He is God in human form. He gave his life for our salvation. Jesus prayed for another way, but there was none (Matthew 26,39). We only receive salvation because God Himself has entered the human world to bear the consequences of sin and to free us from it. That is his gift to us. Most religions teach some kind of work or doing things as the way to salvation - say the right prayers, do the right things and hope that is enough. They teach that people can be good enough if they try hard enough. However, the Christian faith teaches that we all need grace because we will never be good enough no matter how hard we try.
It is impossible because these two ideas can be true at the same time. The doctrine of grace teaches us whether we like it or not, there is no other way to salvation.

The grace of the future

What about the people who die before they hear about Jesus? What about the people who were born before Jesus lived? Do you have any hope? Yes, they have. Precisely because the Christian faith is a faith of grace. People are saved by God's grace and not by saying the name of Jesus or owning a special Vienna. Jesus died for the sins of the whole world, regardless of whether you know about it or not (2 Corinthians 5,14:1; 2,2 John). His death was the victim of reparation for everyone in the past, present and future, whether Palestinian or Peruvian. We can be sure that God is faithful to his word, because the following is written: "He has patience with you and does not want anyone to be lost, but everyone to find the bus" (2 Peter 3,9). Even though his ways and times are often unfathomable, we trust in it because he loves the people he created. Jesus said: «So God loved the world because he gave his only begotten son so that all who believe in him are not lost, but have eternal life. Because God did not send his son into the world because he judges the world, but because the world is saved by him ” (John 3,16: 17).

We believe in it because the risen Christ has conquered death. Therefore, even death is not a boundary between God and men. God is able to persuade people to trust him with their salvation. We do not know how and when, but we can trust his word. Therefore, we can believe in it because, in one way or another, it leads every person, who has ever lived or ever will live, lovingly and unwaveringly to believe in him, for their salvation, either before they die, during or after her death. If some people on the Day of the Last Judgment turn to Christ, or at least learn what He has done for them, then they will not turn away from them.

But regardless of when people are saved and how well they understand their salvation, it is only Christ through whom they are redeemed. Well-intentioned deeds and works will never save anyone, even if people honestly believe in them, because they will be saved if they are good enough. The principle of grace and the sacrifice of Jesus mean that no amount of good deeds or religious works can ever save someone. If there had been such a way, God would have made it possible for us (Galatians 3,21). If people have sincerely tried to attain salvation through work, meditation, flagellation, self-sacrifice, or otherwise, they will learn because their works and deeds bring them nothing to God. Salvation is by grace and by grace alone. The Christian faith teaches that one does not deserve grace and that it is nevertheless available to everyone.

No matter which religious path people have taken, Christ can lead them astray on their way. He is the only Son of God who has made the only sacrifices for all sins that everyone needs. He is the unique messenger and path that testifies to God's grace and salvation. Jesus Himself testified. Jesus is both exclusive and inclusive. He is the narrow path and the Redeemer of the whole world. He is the only way to salvation and yet accessible to everyone. God's grace, perfectly expressed in Jesus Christ, is exactly what every human needs and is the good news, as it is freely available to all. It is not just a good message, but the great news that is worth spreading. D It's really worth thinking about.

Jesus, the only way?