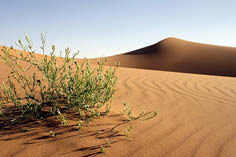 "But there was a garden in the place where he was crucified, and a new crypt in the garden in which no one had ever been placed before" John 19:41. Many of the crucial moments in Biblical history took place in locations that seem to reflect the nature of the events.

The first such moment took place in a beautiful garden where God had placed Adam and Eve. Of course, the Garden of Eden was special because it was God's garden; there one could meet Him as he walked about in the cool of the evening. Then the serpent came into play, seeking to separate Adam and Eve from their Creator. And, as we know, they were cast out of the garden and the presence of God into a hostile world full of thorns and thistles, because they had listened to the serpent and acted against God's order.

The second major event took place in a wilderness where Jesus, the second Adam, faced the temptations of Satan. It is believed that the scene of this confrontation was the wild Judean desert, a dangerous and inhospitable place. Barclay's Bible commentary says: “The desert stretches between Jerusalem on the central plateau and the Dead Sea… It is an area of ​​yellow sand, crumbling limestone and scattered gravel. You can see curved layers of stone, mountain ranges that run in all directions. The hills are like piles of dust; the blistered limestone peels off, the rocks are bare and jagged ... It glows and shimmers with heat like in a big oven. The desert stretches to the Dead Sea and drops 360 meters, a slope of limestone, pebble and marl, crisscrossed by cliffs and circular troughs and finally a sudden abyss down to the Dead Sea ». What a fitting picture for the fallen world, where the Son of Man, alone and without food, resisted all temptations of Satan, who intended to dissuade him from God. However, Jesus remained faithful.

And for the most important event, the scene changes to a stone grave carved out of bare rock. Here the body was taken by Jesus after his death. By dying he has conquered sin and death and has disempowered Satan. He is resurrected from death - and again in a garden. Mary Magdalene mistook him for the gardener until he called her by name. But now he was God, walking in the cool of morning, ready and able to lead his brothers and sisters back to the tree of life. Yes, hallelujah!

Redeemer, through your loving sacrifice, you have saved us from the wilderness of this world, to walk with us now, every day and forever. So we want to respond with joyful gratitude. Amen