With what body will the dead be resurrected? 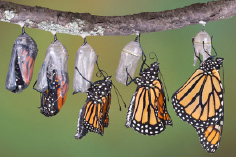 All Christians hope that the believers will rise to immortal life when Christ appears. It is therefore not surprising that the apostle Paul, when he heard that some members of the Church in Corinth denied the resurrection, vigorously rejected their lack of understanding in his first letter to the Corinthians, chapter 1. The first thing Paul repeated was the gospel message to which they also professed: Christ had risen. Paul recalled how the body of the crucified Jesus was placed in a grave and incarnated three days later for glory (Verses 3-4). Then he explained that Christ, our forerunner, had risen from death to life - to show us the way to our future resurrection when he appeared (Verses 4,20-23).

To reaffirm that Christ's resurrection was truly true, Paul referred to over 500 witnesses to whom Jesus appeared after he was brought to life. Most of the witnesses were still alive when he wrote his letter (Verses 5-7). Christ had also appeared personally to the apostles and Paul (Verse 8). The fact that so many people saw Jesus incarnated after the burial meant that he had been incarnated, although Paul did not expressly comment on this in Chapter 15.

He did, however, let the Corinthians know that it would be absurd and unreasonable for the Christian faith to doubt the future resurrection of the faithful, for they believed that Christ had risen from the grave. Not believing in a resurrection of the dead logically meant nothing more than denying that Christ Himself had risen. But if Christ had not risen, believers would have no hope. But that Christ was risen, give the believers the certainty that they too will be resurrected, Paul wrote to the Corinthians.

Paul's message about the resurrection of the faithful is centered on Christ. He explains that the salvation of God through Christ in his life, his death and his resurrection to life enables the future resurrection of believers - and thus the final victory of God over death (Verses 22-26, 54-57).

Paul had preached this good news again and again - that Christ had been brought to life and that believers would also be resurrected when he appeared. In an earlier letter Paul wrote: "If we believe that Jesus died and rose again, God will also lead those who have fallen asleep with him through Jesus" (1 Thessalonians 4,14). Paul wrote that this promise was in accord with "a word of the Lord" (Verse 15).

The question of the new body at the resurrection

In 1 Corinthians 15, Paul specifically reacted to the unbelief and misunderstanding of the Corinthians with regard to the physical resurrection: "But someone could ask: How will the dead be resurrected and with what kind of body will they come?" (Verse 35). The question here is how the resurrection would take place - and which body, if any, the resurrected would receive for the new life. The Corinthians wrongly thought that Paul had spoken of the same mortal, sinful body that they had in this life.

Why did they need a body at the resurrection, they asked themselves, especially a body as corrupt as the present one? Hadn't they already achieved the goal of spiritual salvation and didn't they have to free themselves from their bodies? The theologian Gordon D. Fee says: "The Corinthians are convinced that they have already begun the promised spiritual," heavenly "existence through the gift of the Holy Spirit and especially through the appearance of the tongues. Only the body that had to be removed when death separated her from her ultimate spirituality. »

The Corinthians had not understood that the resurrection body was of a higher and different kind than the current physical body. They would need this new "spiritual" body for living with God in the kingdom of heaven. Paul gave an example from agriculture to illustrate the greater glory of the heavenly body compared to our earthly physical body: He spoke of the difference between a seed and the plant that grows from it. The seed may "die" or perish, but the body - the resulting plant - is of much greater glory. "And what you sow is not the body that is to become, but a mere grain, be it wheat or something else," wrote Paul (Verse 37). We cannot predict what our resurrection body will look like compared to the characteristics of our present physical body, but we know that the new body will be much, much more beautiful - like the oak compared to its seed, the acorn.

The resurrection body will not be a copy, not an exact reproduction of our physical body, says Paul. Also, the body that we receive at resurrection will not consist of the same atoms as the physical body in our earthly life, which will rot or be destroyed when we die. (Apart from that - which body would we get: our body at the age of 2, 20, 45 or 75 years?) The heavenly body will stand out in its quality and glory from the earthly body - like a wonderful butterfly that has its cocoon , previously housing a low caterpillar.

It makes no sense to speculate on how our resurrected body and immortal life will look exactly. But we can make some general statements about the great difference in the nature of the two bodies.

Our current body is a physical body and therefore subject to decay, death and sin. The resurrection body will mean life in another dimension - an immortal, imperishable life. Paul says: "A natural body is sown and a spiritual body is resurrected" - not a "spirit body", but a spiritual body that it does justice to the life that is to come. The new body of believers at resurrection will be "spiritual" - not immaterial, but spiritual in the sense that it was created by God to resemble the glorified body of Christ, transformed and "adapted to the life of the Holy Spirit forever ». The new body will be completely real; the believers will not be disembodied spirits or ghosts. Paul juxtaposes Adam and Jesus to emphasize the difference between our present body and our resurrection body. "As the earthly is, so are the earthly; and as the heavenly is, so are the heavenly » (Verse 48). Those who are in Christ when he appears will have a resurrection body and a life in Jesus' form and being, not Adam's form and being. «And as we have carried the image of the earthly, we will also have the image of the heavenly» (Verse 49). The Lord, says Paul, "will transform our idle body, that he may become his glorified body" (Philippians 3,21).

This means that our resurrection body will not be of transitory flesh and blood like the body that we now know - no longer dependent on food, oxygen and water to be able to live. Paul insisted: «But I say this, dear brothers, that flesh and blood cannot inherit the kingdom of God; also the decay will not inherit the incorruptibility » (1 Corinthians 15,50).

When the Lord appears, our mortal bodies will be transformed into immortal bodies - to eternal life and no longer subject to death and decay. And these are the words of Paul to the Corinthians: «Behold, I tell you a secret: We will not all fall asleep, but we will all be changed; and suddenly, in an instant, at the time of the last trumpet [a metaphor for the coming of Christ]. Because the trumpet will sound, and the dead will rise again, and we will be transformed » (Verses 51-52).

Our physical resurrection to immortal life is the reason for the joy and nourishment of our Christian hope. Paul says: "But if this putrefaction will attract incorruptibility and this mortal will attract immortality, then the word that is written will be fulfilled:" Death is swallowed up by victory " (Verse 54).