Command your works to the LORD 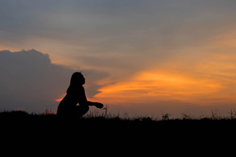 How ridiculous that is! But many Christians have this attitude. They are happy to be taken in the “ambulance” that takes them to heaven, but they do not take the load off their shoulders while driving.

This is contrary to the truth that we find in the Bible - and the truth will make your burden easy! In Proverbs 16,3, King Solomon shows us one of his sparkling gems again: "Command your works to the LORD, and your plan will succeed." There is more to this verse than striving to be a dedicated Christian. “Command” here literally means “roll over (on)". It has something to do with rolling something over or rolling it away on someone else. A report in Genesis 1 makes it clear. Jakob came to a fountain on his way to Paddan-Aram, where he met Rachel. She and others wanted to water their sheep, but a heavy stone covered the opening of the well. Jacob came up and rolled the stone off the

Opening of the fountain » (Verse 10) and watered the sheep. The Hebrew word "wallowed" here is the same word as "command" in Proverbs 16,3. The expression of rolling in the sense of rolling a burden on God can also be found in Psalm 37,5: 55,23 and. It represents complete dependence on God. The apostle Peter wrote in a similar form: «All your care

throw at him; because he cares for you » (1 Peter 5,7). The Greek word for "throw" essentially means the same as the word "(command)" in Hebrew, which also means "roll or throw" (to) »is translated. This is a conscious act on our part. We also find the word "throw" in the account of Jesus' entry into Jerusalem, when he was riding a donkey

Can't you forgive someone? Throw it on god! Are you angry? Throw it on god! Are you scared? Throw this on God! Are you fed up with the injustices in this world? Throw this on God! Are you dealing with a difficult person? Throw the burden on God! Have you been abused? Throw it on god! Are you desperate? Throw it on god! But that is not all. God's invitation to “throw at him” applies without restriction. Solomon wrote that whatever we do may throw us at God. Throw all things at God during your journey through life - all your plans, hopes, and dreams. When you throw everything at God, don't just do it mentally. Really do it. Put your thoughts in words. Talk to God. Be specific: “Let your requests be known to God” (Philippians 4,6). Tell him: "I'm worried about ..." "I'll hand it over to you. It's yours. I do not know what to do". Prayer establishes a relationship and God very much wishes that we turn to him. He wants us to share his life with him. He wants to know you through yourself! God wants to listen to you - what a thought!

The word “command” is sometimes translated as “entrust” in the Old Testament. The Amplified Bible translates Proverbs 16,3 as follows: "Roll [or throw] your works on the Lord [command them / entrust them to him fully]." Whatever it is, entrust it to him. Roll it on him. Trust God that he will take care of the matter and do what he wants. Leave it with him and stay calm. What will happen in the future? God "will work out your plans". He will shape our desires, our wants and our plans so that everything is in harmony with his will, and he will put his desires in our hearts so that they become ours (Psalm 37,4).

Take the burden off your shoulders. God invites us to turn everything over to Him. Then you can have confidence and inner peace, your plans, wishes, and concerns will be fulfilled in some way, because they are in accordance with God's wishes. This is an invitation you should not refuse!

Command your works to the LORD