The coming of the Lord 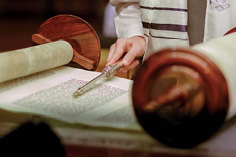 In your opinion, what would be the biggest event that could happen on the world stage? Another world war? The discovery of a cure for a terrible disease? World peace, once and for all? Maybe the contact to extraterrestrial intelligence? For millions of Christians, the answer to this question is simple: the biggest event that will ever happen is the second coming of Jesus Christ.

The central message of the Bible

All of the Old Testament biblical history focuses on the coming of Jesus Christ as Savior and King. As described in Genesis 1, our first parents broke their relationship with God through sin. However, God predicted the coming of a Redeemer who would heal this spiritual break. To the serpent that seduced Adam and Eve to sin, God said: «And I will put enmity between you and the woman and between your offspring and her offspring; he shall crush your head and you will stab him in the heel » (Genesis 1:3,15). This is the earliest prophecy in the Bible about a savior who defeats the power of sin, which sin and death wrought upon people. "He should crush your head". How should this be done? Through the sacrificial death of the Redeemer Jesus: "You will stab him in the heel". He fulfilled this prophecy when he first came. John the Baptist recognized him as "the Lamb of God who bears sin to the world" (John 1,29). The Bible reveals the central importance of God's Incarnation when Christ first came, and that Jesus is now entering the life of believers. She also says with certainty that Jesus will come again, visible and with great power. Indeed, Jesus comes in three different ways:

We humans need God's salvation - his salvation - because we have all sinned and brought death into the world above us. Jesus made this salvation possible by dying in our place. Paul wrote: "For it pleased God that all abundance should dwell in him and through him he reconciled everything with him, be it on earth or in heaven, by making peace through his blood on the cross" (Colossians 1,19: 20). Jesus healed the break that happened in the Garden of Eden. The human family is reconciled to God through his sacrifice.

The Old Testament prophecies referred to the Kingdom of God. The New Testament begins with Jesus as he proclaims "the good news of God": "The time has come and the kingdom of God has come," he said (Mark 1,14-15). Jesus, the king of this kingdom, walked among the people and "made one and forever valid sacrifice for the sin guilt" (Hebrews 10,12 New Geneva Translation). We should never underestimate the importance of the Incarnation, the life and work of Jesus about 2000 years ago.

There is good news for those who believe in Christ: «You too were dead by your transgressions and sins, in which you used to live in the manner of this world ... But God, who is rich in mercy, has in his greatness Love with which he loved us, also us, who were dead in sins, made alive with Christ - by grace you have been saved » (Ephesians 2,1-2; 4-5).

«God raised us up with and put us in heaven in Christ Jesus so that in the coming times he would show the exuberant wealth of his grace through his goodness towards us in Christ Jesus» (Verses 6-7). This section describes our current state as the follower of Jesus Christ!

Why does Jesus live in us now? We note: «Because of grace you have been saved by faith, and not from you: it is God's gift, not from works, so that no one can boast. Because we are his work, created in Christ Jesus for good works that God has prepared beforehand that we should walk in it » (Ephesians 2,8: 10). God saved us by grace, not because of our own efforts. Although we cannot earn salvation through works, Jesus lives in us so that we can now do good works and thereby glorify God.

After Jesus' resurrection when his young saw him rise, two angels asked them: "What are you standing there looking at heaven for? This Jesus who was taken up to heaven by you will come back as you saw him go to heaven » (Acts 1,11). Yes, Jesus is coming again.

When he first came, Jesus left some messianic predictions unfulfilled. That was one of the reasons why many Jews rejected him. They expected the Messiah as a national hero who would free them from Roman rule. But the Messiah had to come first to die for all of humanity. Only later would he return as the victorious king and not only elevate Israel, but set his eternal kingdom over all the kingdoms of the world. «The realms of the world of our Lord and his Christ have become, and he will reign forever and ever» (Revelation 11,15).

Jesus said: "And when I go to prepare the place for you, I will come again and take you so that you are where I am" (John 14,3). Later, the apostle Paul wrote to the congregation: "When the command is sounded, when the voice of the archangel and the trumpet of God sound, the Lord himself will come down from heaven" (1 Thess 4,16). At Jesus' second coming, the righteous who died, these are the believers who entrusted their lives to Jesus, are raised to immortality, and the believers who are still alive when Jesus returns are transformed to immortality. Everyone will go to meet him in the clouds (Vv. 16-17; 1 corinthians 15,51: 54).

Over the centuries, speculation about the second coming of Christ has caused a variety of disputes - and innumerable disappointments, as the different scenarios of the forecasters have proven to be wrong. The overemphasis on "When Jesus Will Return" can distract us from the central focus of the gospel. This is Jesus' redemptive work for all human beings, accomplished through his life, death, resurrection and pouring out of grace, love and forgiveness as our heavenly high priest. We can get so deep into prophetic speculation that we fail to fulfill the legitimate role of Christians as witnesses in the world. We should rather illustrate the loving, merciful and Jesus-oriented way of life and proclaim the good news of salvation.

It is impossible to find out when Christ will come again, and therefore unimportant compared to what the Bible says. What should we focus on? The best thing is to be ready when Jesus comes again whenever this happens! "That is why you are always ready," said Jesus, "for the Son of Man comes at a time when you do not expect it." (Matthew 24,44 New Geneva translation). "But whoever remains steadfast to the end will be saved." (Matthew 24,13 New Geneva translation). The focus of the Bible is always on Jesus Christ. Therefore, our life as Christ's follower should revolve around him. Jesus came to earth as a man and God. He now comes to us believers through the indwelling of the Holy Spirit. Jesus Christ will come back in glory "to transform our vain body so that he may become his glorified body" (Philippians 3,21). Then «creation will also be free from the bondage of impermanence to the wonderful freedom of God's children» (Romans 8,21). Yes, I'm coming soon, says our Savior. As disciples of Christ, we all answer with one voice: "Amen, yes, come, Lord Jesus!" (Revelation 22,20).

The coming of the Lord