The whole picture of Jesus 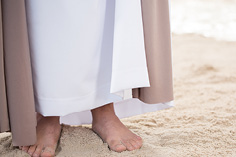 I recently heard the following story: A pastor was working on a sermon when his 5-year-old daughter came into his study and asked for his attention. Annoyed by the disturbance, he tore a world map into small pieces that was in his room and said to her: After you have put this picture together, I will take my time for you! To his surprise, his daughter came back with the whole card within 10 minutes. He asked her: honey, how did you do it? You couldn't know the names of all continents and countries! She replied: There was a picture of Jesus on the back and I put the individual parts together into a picture. He thanked his daughter for the picture, kept his promise, and then worked on his sermon, which reveals the individual parts of Jesus' life as a picture throughout the Bible.

Can you see the whole picture of Jesus? Of course, no picture can really reveal the complete deity, whose face shines like the sun in its full power. We can get a clearer picture of God by putting together the parts of the entire scripture.
"In the beginning was the Word, and the Word was with God, and God was the Word. The same was with God in the beginning. All things are made by the same, and without the same, nothing that is made is made » (John 1,1: 3). That is a description of Jesus in the New Testament.

God is described in the Old Testament how Jesus, as the unborn son of God, lived with the people of Israel. Jesus, the living Word of God, walked with Adam and Eve in the Garden of Eden, later he appeared to Abraham. He wrestled with Jacob and led the people of Israel out of Egypt: "But I will not leave you, brothers and sisters, in ignorance that our fathers were all under the cloud and all went through the sea; and all were baptized into Moses in the cloud and in the sea, and all ate the same spiritual food and all drank the same spiritual drink; for they drank from the spiritual rock that followed them; but the rock was Christ » (1 Corinthians 10,1: 4-7; Hebrews).

Jesus is revealed in the Old Testament and in the New Testament: "The Word became flesh and dwelt among us, and we saw His glory, a glory as the only Son of the Father, full of grace and truth" (John 1,14).

Do you see Jesus with the eyes of faith as your Savior, Redeemer, as your high priest and older brother? Soldiers arrested Jesus to be crucified and killed. God raised him from the dead. The full picture of Jesus Christ now resides in you if you believe in Him. In this trust, Jesus is your hope and gives you his life. His precious blood will heal you for all eternity.