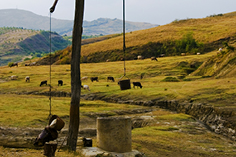 Anna, a single middle aged woman, came home after a stressful day at work. She lived alone in her tiny, modest apartment. She sat down on the worn couch. Every day was the same. "Life is so empty," she thought desperately. "I am all alone".
In a posh suburb, Gary, a successful businessman, sat on his terrace. Everything seemed ok from the outside. Nevertheless, something was missing. He could not say what he was missing. He felt an inner emptiness.
Different people. Different circumstances. Same problem. People can not find true satisfaction from people, possessions, pastimes or pleasure. For them, life is like the center of a donut - empty.

At the Jacob's Fountain

Jesus had left Jerusalem because of the resistance of the Pharisees. When he returned to the province of Galilee, he had to go through Samaria, an area shunned by Jews. The Assyrians had conquered Jerusalem, the Israelites were deported to Assyria, and foreigners were led into the area to maintain peace. There was a mingling of the people of God with Gentiles, which was despised by the "pure Jews".

Jesus was thirsty, the midday heat had taken its toll. He came to the Jacob's well outside the city of Sychar, from which the water was drawn up. Jesus met a woman at the fountain and asked her to give him water to start a conversation with her. Such behavior was taboo among Jews. (John 4,7: 9) This was because she was a despised Samaritan woman and a woman. She was shunned because of her bad reputation. She had five husbands and lived with a man and was alone in a public place. Unrelated men and women did not speak to each other in public places.

These were the cultural restrictions that Jesus ignored. He felt that she had a shortcoming, an emptiness that had not been filled in. She was looking for security in human relationships, but could not find it. Something was missing, but she didn't know what it was. She had not found her completeness in the arms of six different men and had probably been abused and humiliated by some of them. Divorce laws allowed a man to "fire" a woman for trivial reasons. She was rejected, but Jesus promised to quench her spiritual thirst. He told her that he was the expected Messiah. Jesus answered and said to her: "If you recognize the gift of God and who is he who says to you: Give me to drink !, you will ask him, and he will give you living water. Whoever drinks of this water will be thirsty again; but whoever drinks of the water that I give him will never be thirsty forever, but the water that I will give him will become a source of water in him that swells in eternal life » (John 4,10: 13-14).
She enthusiastically shared her experience with people in her city, and many believed in Jesus as the savior of the world. She began to understand and experience this new life - that she could be completely in Christ. Jesus is the source of living water: «My people commit a double sin: they, the living source, leave me and make cisterns that are cracked and do not hold the water» (Jeremiah 2,13).
Anna, Gary and the Samaritan drank from the well of the world. The water from that could not fill the void in her life. Even believers can experience this emptiness.

Do you feel empty or lonely? Is there anyone or anything in your life trying to fill your void? Are you lacking joy and peace in your life? God's answer to these feelings of emptiness is to fill the gap in your life with His presence. They were created for a relationship with God. They were created to enjoy the feeling of belonging, acceptance and appreciation from him. You will still feel incomplete if you try to fill this gap with anything other than his presence. Through an ongoing close relationship with Jesus, you will find the answer to all life's challenges. It will not disappoint you. Her name is on each of his many promises. Jesus is human and God at the same time and like any friendship you share with someone else, it takes time for a relationship to develop. This means spending time together and sharing, listening and speaking about everything that comes to mind. «How precious, oh God, is your grace! People seek refuge in the shadow of your wings. They may enjoy the richness of your house, and you give them to drink from a stream of joy. With you is the source of all life, in your light we see the light » (Psalm 36,9).