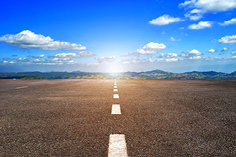 Shocked by real grace is scandalous. Grace does not excuse sin, but it accepts the sinner. It is part of the nature of grace that we do not deserve it. God's grace changes our lives and is what Christian faith is all about. Many people who come into contact with God's grace are afraid of not being under the law. They think this will make them sin more. Paul was confronted with this view and reacted: «How now? Shall we sin because we are under grace, not under the law? That is far away! » (Romans 6,15).

Recently, I heard of a story that made me think of God's mercy and its consequences. One morning a father went to town with his son. They lived on a farm 40 km north of Durban, in South Africa. The father wanted to keep the car waiting and work on the other side of the city. When they arrived in the city, the father left his son to do his business. He told his son to drive the car into the garage where he had booked the service. He was to drive back to his father after the garage had been waiting for the car to return home afterwards.

The son drove to the garage by car and in the early afternoon the car was ready for pickup. He looked at his watch and thought he was watching a movie in the cinema around the corner before picking up his father. Unfortunately, this film was one of those epic films that ran for two and a half hours. When he came out, the sun went down.
On the other side of the city, his father was worried. He called the garage to inquire about his son's whereabouts. He learned that the son had left the car a few hours earlier (that was in the days before the cell phone). When it got dark, the son came to pick up his father.

Where have you been? Asked the father. Since the son did not know that his father had already called in the garage, he replied: "They took a little longer in the garage. When I got there, they were already busy with other cars. You later started working on our car ». He said this with such a serious face that his father would have believed that lie if he had not known the truth.
With a sad face, the father said, "Son, why are you lying to me? I called the garage and they told me that you left several hours ago. I raised you to be an honest man. It seems that I obviously failed in it. Now I'm going to walk home and try to figure out what I did wrong in my upbringing, which made you lie to me like that ».

With that, he turned around and walked 40 km home on foot! The young man stood there and did not know what to say or do. When he came to his senses, he decided to drive slowly behind his father, hoping that eventually he would change his mind and get in the car. Many hours later, the father came in and the son, who had followed his father's car, went to park the car. "From that day on, I decided never to lie to my father again," the son said as he related the incident.

Most people do not understand what sin has done to them. When they become aware of the magnitude, it is the last thing they want in their lives.
I think it's a classic story of grace. The father decided not to punish his son for lying. However, he decided to take the pain for his son. That is grace - undeserved favor, kindness, love and forgiveness. Our Heavenly Father did just that. When people sinned, he loved us so much that he gave his only begotten son so that we can be saved from sin and death by believing in him. Because so God loved the world that he gave his only begotten son so that all who believe in him are not lost, but have eternal life (John 3,16). He took the pain on himself. Does the fact that the father answers with patience promote more lies and sins? No! Answering with sin does not mean understanding what just happened.

«For the healing grace of God has appeared to all people and educates us that we should refuse the godless being and worldly desires and live in this world in a prudent, just and pious way» (Titus 2,11-12). Instead of teaching us to sin more, grace teaches us to say no to sin and to lead a self-controlled, upright and God-directed life!

How does grace do that?

It is very difficult for us to understand the impact and pain of sin and the lack of relationships. It's like a drug addict whose life was destroyed by drugs. If the Father offers mercy and brings the son from the drug cave to rehab, it is inconceivable that the son, as soon as he comes out of rehab, wants to take drugs again so that the father can show more mercy. That does not make sense.

Once we understand what the Father has done for us in Jesus Christ, what sin is and what sin has done to us and what it continues to do to us, our answer is a clear no! We can not continue to sin for grace to abound.

Grace is a beautiful word. It is a beautiful name and means the graceful or the gracious. My sister-in-law's name is Grace (Grace). Every time you hear or read the name Grace, remember what it wants to teach you. Please remember that grace is not only about "salvation", but also that the gracious, compassionate attitude is a teacher who wants to educate and instruct you!