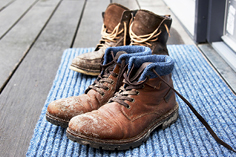 Paul writes in the Letter to the Romans: “Dear brothers and sisters, what I wholeheartedly wish the Israelites and ask from God for them is that they be saved” (Romans 10,1 New Geneva Translation).

But there was a problem: «Because they don't lack zeal for God's cause; I can attest to that. What they lack is the right knowledge. They have not recognized what God's righteousness is about and are trying to survive before God through their own righteousness. They are rebelling against God's righteousness instead of submitting to it » (Romans 10,2-3 New Geneva translation).

The Israelites that Paul knew wanted their own works (by keeping the law) righteous before God.

«Because with Christ the goal of what the law is about is achieved: everyone who believes in him is declared righteous. The way to justice is the same for Jews and non-Jews » (Romans 10,4 New Geneva Translation). You cannot achieve God's righteousness by improving yourself. God gives you justice.

We all lived under laws at times. When I was a boy, I lived under the laws of my mother. One of her rules was, after playing in the yard, taking off my shoes before I entered the apartment. I had to clean heavily soiled shoes with water on the porch.

God is no different. He does not want the filth of our sins to be spread all over his house. The problem is, we have no way to clean ourselves and we can not come in until we are clean. God lets only those who are holy, sinless and pure into his dwelling. No one can achieve this purity by themselves.

That's why Jesus had to come out of his house to cleanse us. Only he could clean us up. If you are busy freeing yourself from your own filth, you can clean yourself until the last day, it will not be enough to enter the house. However, if you believe what Jesus says because he has already made you clean, you can enter God's house and sit at his table to eat.

The verses 5-15 in Romans 10 deal with the following fact: It is impossible to know God until sin is eliminated. The knowledge of God can not remove our sin.

The eternal Word of God has come to us as God and man, the Son of God, Jesus Christ of flesh and blood. We could not find him in heaven. He decided in his divine freedom to come down to us. Jesus saved us humans by washing away the filth of sin and opening the way for us to come into God's house.

This begs the question: Do you believe what God says? Do you think that Jesus found you and washed away your filth so you can now enter his house? If you do not believe that, you are outside of God's house and can not enter.

Paul speaks in Romans 10,9: 13–XNUMX New Genevan translation: “If you confess with your mouth that Jesus is Lord and believe with your heart that God raised him from the dead, you will be saved. Because you are declared righteous if you believe with your heart; one is saved if one confesses “faith” with one's mouth. That is why the Scripture says: "Everyone who trusts him will be saved from destruction" (Isaiah 28,16). It makes no difference whether someone is a Jew or a non-Jew: everyone has the same gentleman, and he lets everyone share in his wealth who invokes him "in prayer". "Whoever calls on the name of the LORD shall be saved" (Joel 3,5).

This is the reality: God redeemed his creation through Jesus Christ. He washed away our sins and made us clean through his sacrifice, without our help and request. If we believe in Jesus and confess that he is the Lord, we are already living in this reality.

On the 1. January 1863 signed the emancipation proclamation to President Abraham Lincoln. This executive order said all slaves in all states in the uprising against the US government are now free. The news of this freedom reached the slaves of Galveston, Texas, only on 19. June 1865. For two and a half years, these slaves did not know about their freedom and did not experience reality until US Army soldiers told them.

Jesus is our Savior

Our confession does not save us, but Jesus is our savior. We cannot oblige God to do something for us. Our good works cannot make us sinless. It doesn't matter what type of activity it is. Whether it's about obeying a rule - like keeping a day holy or avoiding alcohol - or whether it's the job of saying "I believe". Paul says it unequivocally: "Again: You are saved by God's grace, and that is because of your faith. You do not owe your salvation to yourself; no, it is God's gift » (Ephesians 2,8 New Geneva Translation). Even faith is a gift from God!

God does not expect a confession

It helps to understand the difference between a contract and a confession. A contract is a legal agreement in which an exchange takes place. Each party is obliged to trade something for something else. If we have a contract with God, our commitment to Jesus will save us. But we can not commit God to act on our behalf. Grace is Christ, who decides in his divine freedom to come down to us.

In an open court, a person confesses that the fact exists. A criminal could say: «I admit that I stole the goods. He accepted reality in his life. Likewise, a follower of Jesus says: «I admit I have to be saved or Jesus saved me.

What slaves 1865 needed in Texas was not a contract to buy their freedom. They had to know and confess that they were already free. Their freedom was already established. President Lincoln was able to free her, and he released her by his order. God had the right to save us and he saved us through the life of his son. What the slaves needed in Texas was to hear of their freedom to believe that it was true and to live accordingly. Slaves need someone to come and tell them that they are free.

Can you imagine what it was like for these slaves to chop cotton in the 40-degree heat of Texas that June day and hear the good news of their freedom? They had the best day of their lives! In Romans 10,15 Paul quotes from Isaiah: "How beautiful are the feet of those who bring good news" (Isaiah 52,7).

What is our role?

What is our role in God's plan of salvation? We are his messengers of joy and carry the good news of freedom to people who have never heard of their freedom. We cannot save a single person. We are the messengers, the news anchors of the good news and bring the good news: «Jesus has accomplished everything, you are free»!

The Israelites Paul knew heard the good news. They did not believe the words that Paul brought them. Do you believe in the liberation from your slavery and live in the new freedom?