What do you think about your consciousness? 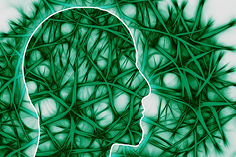 Among philosophers and theologians, it is called the mind-body problem (also body-soul problem). It is not a matter of fine motor coordination (like drinking a sip from a cup without spilling anything or making mistakes while playing darts). Instead, the question is whether our bodies are physical and our thoughts are spiritual; in other words, whether people are purely physical or a combination of the physical and the spiritual.

Although the Bible does not address the mind-body problem directly, it clearly indicates and distinguishes between a non-physical side of human existence (in New Testament terminology) between the body (Body, flesh) and soul (Mind, spirit). And although the Bible does not explain how body and soul are related or how they interact exactly, it does not separate the two or presents them as interchangeable and the soul is never reduced to the physical. Several passages point to a unique “spirit” in us and show a connection to the Holy Spirit, which suggests that we can have a personal relationship with God (Romans 8,16:1 and 2,11 Cor).

When considering the mind-body problem, it is important that we start with a basic teaching of Scripture: there would be no people and they would not be what they are beyond an existing, ongoing relationship with the transcendent Creator God, who is all Created things and maintained their existence. The creation (including humans) would not exist if God were completely separated from her. Creation has not created itself and does not maintain its existence itself - only God exists in itself (Theologians speak of God's asity here). The existence of all created things is a gift from the self-existing God.

Contrary to biblical testimony, some claim that humans are nothing more than material beings. This assertion raises the following question: How can something as immaterial as human consciousness arise from something as unconscious as physical matter? A related question is: Why is there sensory information? These questions raise further questions as to whether consciousness is just an illusion or is there one (albeit non-physical) component that is connected to the material brain, but must be distinguished.

Almost everyone agrees that people have consciousness (an inner world of thoughts with images, perceptions and feelings) - which is generally referred to as thinking and which is as real to us as the need for food and sleep. However, there is no agreement on the nature and cause of our consciousness / reasoning. Materialists consider it only as a result of the electrochemical activity of the physical brain. Non-materialists (including Christians) see it as an immaterial phenomenon that is not identical to the physical brain.

Speculations about consciousness fall into two main categories. The first category is physicalism (Materialism). This teaches that there is no invisible spiritual world. The other category is called parallel dualism, which teaches that the mind can have a non-physical characteristic or is completely non-physical, so that it cannot be explained with purely physical expressions. Parallel dualism views the brain and mind as interacting and working in parallel - if the brain is injured, the ability to reason logically may be impaired. As a result, the parallel interaction is also affected.

In the case of parallel dualism, the term dualism is used in humans to distinguish between observable and unobservable interaction between the brain and the mind. The conscious mental processes that occur individually in each person are private and not accessible to outsiders. Another person can get our hand, but they cannot find out our private thoughts (and most of the time, we love that God has arranged it that way!). In addition, certain human ideals that we have within ourselves cannot be reduced to material factors. The ideals include love, justice, forgiveness, joy, mercy, grace, hope, beauty, truth, goodness, peace, human action and responsibility - these give purpose and meaning to life. A passage in the Bible tells us that all good gifts come from God (James 1,17). Could this explain to us the existence of these ideals and care of our human nature - as God's gifts to humanity?

As Christians, we refer to the unsearchable activities and influence of God in the world; that closes his actions through created things (natural effect) or direct action by the Holy Spirit. Since the Holy Spirit is invisible, his work cannot be measured. But his work happens in the material world. His works are unpredictable and cannot be reduced to empirically understandable cause-and-effect chains. These works include not only God's creation as such, but also the Incarnation, Resurrection, Ascension, the mission of the Holy Spirit and the expected return of Jesus Christ to complete the Kingdom of God, and the establishment of the new heaven and earth.

Back to the mind-body problem: Materialists claim that thinking can be explained physically. This perspective opens up the possibility, if not the need, to artificially reproduce the mind. Since then, the expression «artificial intelligence» (AI) was shaped, AI is a topic that is viewed optimistically by computer developers and science fiction authors. Over the years, AI has become an integral part of our technology. Algorithms are programmed for all types of devices and machines, from cell phones to automobiles. Software and hardware development has progressed so much that machines have triumphed over humans in game experiments. In 1997 the IBM computer Deep Blue beat the reigning chess world champion Garry Kasparov. Kasparov accused IBM of fraud and demanded revenge. I wish IBM hadn't refused, but it was decided that the machine had worked hard enough and simply sent Deep Blue into retirement. In 2011, the Jeopardyuiz show hosted a game between IBM's Watson Computer and the top two Jeopardy players. (Instead of answering questions, the players should formulate questions about given answers at lightning speed.) The players lost by a large margin. I can only comment (and that's ironically meant) that Watson, who only worked for what he was designed and programmed for, was not happy; but the AI ​​software and hardware engineers do. That should tell us something!

Materialists claim that there is no empirical evidence that mind and body are separate and different. They argue that the brain and consciousness are identical and that in some way the mind arises from the quantum processes in the brain or arises from the complexity of the processes taking place in the brain. One of the so-called "angry atheists", Daniel Dennett, goes even further and claims that consciousness is an illusion. Christian apologist Greg Koukl points to the fundamental error in Dennett's reasoning:

If there was no real awareness, there would be no way to even realize that it was just an illusion. If awareness is required to perceive an illusion, then it can not be an illusion itself. Likewise, one should be able to perceive both worlds, the real and the illusory, in order to recognize that there is a difference between the two, and thus identify the illusory world. If all perception was an illusion, it would not be recognizable as such.

Through material (Empirical) methods cannot be discovered immaterial. Only material phenomena can be determined that are observable, measurable, demonstrable and repeatable. If there are only things that are empirically demonstrable, then what cannot exist can be unique (not repeatable). And if this is the case, then story that happened from unique, non-repeatable sequences of events cannot exist! This may be convenient, and for some it is an arbitrary explanation that there are only things that can be proven by a special and preferred method. In short, there is no way to prove empirically that only empirically verifiable / material things exist! It is illogical to reduce the entire reality to what can be discovered by this one method. This view is sometimes called Scientism.

This is a big topic and I only scratched the surface, but it is also an important topic - note Jesus' remark: «And do not be afraid of those who kill the body but cannot kill the soul» (Matthew 10,28). Jesus was not a materialist - he made a clear distinction between the physical body (which also includes the brain) and an intangible component of our human being, which is the very essence of our personality. When Jesus tells us not to allow others to kill our souls, he also means that we should not let others destroy our faith and trust in God. We cannot see God, but we know and trust him and through our non-physical consciousness we can even feel or perceive him. Our belief in God is indeed part of our conscious experience.

Jesus reminds us that our minds are an integral part of following Him as His disciples. Our consciousness gives us the ability to believe in the triune God, Father, Son and Holy Spirit. It helps us to accept the gift of faith; this belief is "a firm confidence in what you hope and a doubt in what you don't see" (Hebrews 11,1). Our consciousness enables us to know and trust God as the Creator in order to “realize that the world is created by God's Word, so that everything you see comes from nothing (English Üs: from invisible) has become » (Hebrews 11,3). Our consciousness enables us to experience peace that is higher than all reason, to recognize that God is love, to believe in Jesus as the Son of God, to believe in eternal life, to know true joy and to know that we truly are Are God's beloved children.

Let us rejoice that God has given us the mind to know our own world and to know Him,

What do you think about your consciousness?