A big step for humanity 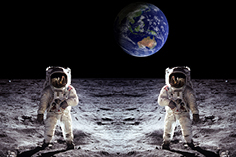 On the 21. July 1969 left astronaut Neil Armstrong the base vehicle and has entered the moon. His words were: "This is a small step for a man, a big step for humanity." It was a monumental historical moment for all humanity - man was on the moon for the first time.

I do not want to distract from NASA's amazing scientific achievement, but I still wonder: what did these historic steps on the moon help us do? Armstrong's words still sound today - as before, but how did his walking on the moon solve our problems? We still have war, bloodshed, hunger and disease, increasing environmental catastrophes due to global warming.

As a Christian, I can say with complete conviction that the most historic steps of all time, which really represented the “giant steps for humanity”, were the steps of Jesus that he took from his grave 2000 years ago. Paul describes the need for these steps in the new life of Jesus: «If Christ has not risen, your faith is an illusion; the guilt that you have placed on you through your sins is still on you » (1 Corinthians 15,17).

Unlike the 50 years ago, the world's media were absent, there was no worldwide coverage, it was not televised or recorded. God does not need man to make a statement. Jesus Christ was raised at a silent time when the world was asleep.

Jesus' steps were truly for all mankind, for all people. His resurrection explained the defeat of death. There can be no greater leap for humanity than defeating death. His steps guaranteed his children forgiveness of sin and eternal life. These steps as the resurrected were and are certainly the most decisive in all of human history. A giant leap from sin and death to eternal life. «We know that Christ, after rising from the dead, will no longer die; death has no power over him » (Romans 6,9 New Geneva Translation).

That man could walk on the moon was an amazing achievement. But when God died through Jesus on a cross for our sins and sinners, and then to rise again and walk in the garden, was the most important step for humanity.