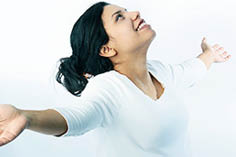 Many of you know when I travel, I want to express my greetings in the local language. I'm happy to go beyond a simple "hello". Sometimes, however, a nuance or subtlety of the language confuses me. Although I have learned a few words in different languages ​​over the years and some Greek and Hebrew in my studies, English remains the language of my heart. So it is also the language in which I pray.

As I reflect on prayer, I remember a story. There was a man who wished to pray as best he could. As a Jew, he was aware that traditional Judaism emphasizes praying in Hebrew. As an uneducated he did not know the Hebrew language. So he did the only thing he knew to do. He repeated in his prayers again and again the Hebrew alphabet. A rabbi heard the man pray and asked him why he did it. The man answered, "The Holy One, blessed be he, knows what is in my heart, I give him the letters and he puts the words together."

I think God heard the man's prayers because first of all, God cares about the heart of those who pray. Words are also important because they convey the meaning of what has been said. God who is El Shama (the God who hears Psalm 17,6) hears prayer in all languages ​​and understands the intricacies and nuances of every prayer.

When we read the Bible in English, it is easy to miss some subtleties and nuances of the meaning that the Biblical primordial languages ​​convey in Hebrew, Aramaic and Greek. For example, the Hebrew word Mitzwa is typically translated into the English word bid. But from this perspective, one is inclined to see God as a strict disciplinarian, administering burdensome rules. But Mitzvah testifies that God blesses and privileges His people, not burdened. When God gave his mitzvah to his chosen people, he first established the blessings that bring obedience, as opposed to the curses that come from disobedience. God told his people, "I want you to live this way, that you have life and bless others." The chosen people were honored and privileged to be in league with God and eager to serve Him. Graciously she instructed God to live in this relationship with God. From this relationship perspective, we should also tackle the subject of prayer.

Judaism interpreted the Hebrew Bible as requiring formal prayers three times a day, and additional times on the Sabbath and feast days. There were special prayers before meals and then, when new clothes were put on, hands were washed and candles were lit. There were also special prayers when something unusual was seen, a majestic rainbow or other extraordinary events. If the paths crossed with a king or other fees or big tragedies occurred, such as: A fight or earthquake. There were special prayers when something exceptionally good or bad happened. Prayers before going to bed in the evening and after getting up in the morning. Although this prayer approach could become ritual or annoying, its purpose was to facilitate constant communication with the One who watches over his people and blesses them. The Apostle Paul took this intention when he was in 1. Thessalonian 5,17 Christi's successor admonished, "Never stop praying." To do this is to live life with conscientious purpose before God, to be in Christ and to be in service with Him.

This relationship perspective does not mean renouncing fixed prayer times and not approaching them in a structured manner in prayer. A contemporary said to me, "I pray when I feel inspired." Another said, "I pray when it makes sense to do so." I think both comments overlook the fact that ongoing prayer is an expression of our intimate relationship with God in everyday life. This reminds me of Birkat HaMazon, one of the most significant prayers in Judaism spoken at ordinary meals. It refers to 5. Moses 8,10, where it says, "If you have plenty to eat, bless the Lord your God for the good land he has given you." If I have enjoyed a delicious meal, all I can do is thank God who gave it to me. To increase our God-consciousness and God's role in our daily lives is one of the great purposes of prayer.

If we only pray when we feel inspired to do so, if we already know about God's presence, we will not raise our awareness of God. Humility and awe of God don't just come to us. This is another reason to make prayer a daily part of the dialogue with God. Note, if we want to do something well in this life, we have to keep practicing prayer, even if we don't feel like it. This applies to prayer as well as to sports or the mastery of a musical instrument and, last but not least, to become a good writer (and many of you know that writing is not one of my favorite activities).

An Orthodox priest once told me that he made the traditional cross during prayer. When he wakes up, the first thing to thank is for living another day in Christ. As he crucified himself, he ended the prayer with the words: "In the name of the Father and the Son and the Holy Spirit." Some say that this practice came into being under the care of Jesus as a substitute for the Jewish practice of wearing prayer straps, others say it came about after the resurrection of Jesus. With the sign of the cross it is the short form for Jesus' atonement. We know for sure that it was a common practice in 200 AD, when Tertullian wrote: "In everything we do, we put the sign of the cross on our foreheads. Whenever we enter or leave a place; before we dress; before we bathe; when we take our meals; when we light the lamps in the evening; before we go to sleep; when we sit down to read; before each task we draw the sign of the cross on the forehead. "

Although I am not saying that we need to accept any special prayer rituals, including crucifying ourselves, I urge you to pray regularly, consistently, and incessantly. This gives us many helpful ways of knowing who God is and who we are in relation to Him so that we can always pray. Can you imagine how our relationship with God would deepen if we thought and worshiped God in the morning, throughout the day, and before we fell asleep? If we act in this way, it will certainly help to consciously “walk” the day, mentally connected with Jesus.

PS: Please unite with me and many other members of the Body of Christ in prayer for the loved ones of the victims through a shootout during a prayer meeting in the Emanuel African Methodist Episcopal (AME) Church in downtown Charleston, South Carolina, have died. Nine of our Christian brothers and sisters were murdered. This shameful, hateful incident shockingly shows us that we live in a fallen world. It clearly shows us that we have a mandate to pray fervently for the final coming of the Kingdom of God and for the return of Jesus Christ. May we all intercede in prayer for the families who are suffering from this tragic loss. Let us also pray for the AME church. I am amazed at the way they responded based on grace. A heartfelt love and forgiveness amidst overwhelming sadness. What a tremendous testimony of the gospel!

We also include all people in our prayers and intercessions who are suffering from human violence, illness or other hardships these days.