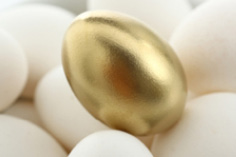 Jesus told his disciples to pray for his kingdom to come. But what exactly is this realm and how exactly will it come? With the knowledge of the secrets of the kingdom of heaven (Matthew 13,11) Jesus described the kingdom of heaven to his disciples by making it pictorial for them. He would say: "The kingdom of heaven is like ..." and then made comparisons, such as the mustard seed, which is small at the beginning, the man who finds a treasure in a field, a farmer who scatters the seeds or a nobleman who sells all his habakkuk and goods to acquire a very special pearl. Through these comparisons, Jesus tried to teach his disciples that the Kingdom of God is "out of this world" (John 18:36). Nevertheless, the disciples continued to misunderstand his explanations and assumed that Jesus would lead their oppressed people to a secular kingdom in which they had political freedom, power and prestige. Many Christians today understand that the Kingdom of Heaven is more concerned with the future and affects us less in the present.

The second stage began with what Jesus did for us through his death, resurrection, ascension, and sending the Holy Spirit. Although he is no longer physically present, he lives in us through the Holy Spirit, bringing us together as one body. The Kingdom of Heaven is now present. It is present throughout the creation. Regardless of which country is our earthly home, we are already citizens of the sky, since we are already under the rule of God and accordingly live in the kingdom of God.

Those who follow Jesus become part of the Kingdom of God. When Jesus taught his disciples to pray: "Your kingdom come. Thy will be done on earth, as it is in heaven" (Matthew 6,10), he made them familiar with both the concerns of the present and the future in prayer. As followers of Jesus, we are called to testify of our heavenly citizenship in His Kingdom, which has already begun. We should not think of the Kingdom of Heaven as something that only affects the future, because as citizens of this kingdom, we are already called upon to invite our fellow human beings to become part of this kingdom too. Working for the Kingdom of God also means looking after poor and needy people and taking care of the preservation of creation. Through such deeds we share the good news of the cross because we represent the kingdom of God and our fellow human beings can recognize it through us.

The third stage of the kingdom of heaven lies in the future. It will then attain its fullness when Jesus comes again and initiates a new earth and a new heaven.

At that time everyone will recognize God and he will be recognized for who he really is - "all in all" (1 Corinthians 15,28). We now have a deep hope that everything will be restored at this time. It is an encouragement to imagine this state and to think about how it will be, even if we should remember Paul's words that we cannot yet fully understand it (1 Corinthians 2,9). But while we dream of the third stage of the kingdom of heaven, we shouldn't forget the first two stages. Although our goal is in the future, the kingdom is already present and because of that, we are called to live accordingly and to share the good news of Jesus Christ and fellow human beings in the kingdom of God to have (the present and future) part.