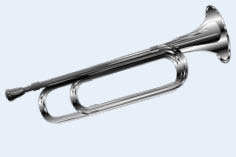 In September (Exceptionally on October 3 this year) the Jews celebrate New Year's Day, "Rosh Hashana", which means "head of the year" in Hebrew. It is part of the tradition of the Jews that they eat a piece of a fish's head, symbolic of the head of the year, and each other with «Leschana towa», which means «To a good year!» means to greet. According to tradition, there is a connection between the festival of Rosh Hashana and the sixth day of the week of creation, on which God created man.

In the Hebrew text of Leviticus 3:23,24, the day is given as "Sikron Terua", which means "Day of Remembrance with Trumpet Bubbles". Therefore, this day is often called the Festival of Trumpets in English (German: trombone day). Many rabbis teach that a shofar became Rosh Hashana (a trombone made from a ram's horn) blown at least 100 times, including a series of 30 times, to signal hope for the coming of the Messiah. I have a shofar and I can tell you that it is very difficult to get a tone at all. I read that it was customary to have a trained substitute at the Rosh Hashana Festdienst in case the first one was unable to blow the required number of trumpet signals.

According to the Jewish sources, there are three types of beeps that were blown on that day:

Regarding Teru'a, the Talmud says: “If there is a judgment from below (a broken heart), you don't need a dish from above ”. Rabbi Moshe Ben Maimon (known as Maimonides), perhaps the most important medieval Jewish scholar and teacher, adds the following important qualifications:

It is not enough that God alone is my king. If all humanity does not recognize God as King, then something is missing in my own relationship with God. It is part of my love for the Almighty that I help all people recognize Him. Of course, this is largely an expression of my deep concern for others. But it also affects my own sense of God's all-encompassing royal rule.

[Blowing the trombones - enlarge picture] Ancient Israel originally used ram horns for their trumpets; after a while, as we learn from Numbers 4, these were trumpeted (or trumpets) made of silver replaced. The use of trombones is mentioned 72 times in the Old Testament. They were blown on various occasions: to alert when in danger, to call the people to a festive gathering, to announce announcements, and as a call to worship. In times of war, trumpets were used to prepare the soldiers for their deployment and then to give the signal for combat. The arrival of the king was also announced with trumpets.

Nowadays, some Christians celebrate the trumpet day as a festive day with a service and often combine this with reference to future events - Jesus' second coming or the rapture of the church. However well-meaning these interpretations of this festival may be, they overlook the fact that Jesus has already fulfilled what this festival had pointed out. As we know, the old covenant that included Trumpet Day was temporary. It was used to announce the coming Messiah to people. His titles are prophet, priest, wise man and king. The trumpet blowing to Rosh Hashana not only signals the beginning of the annual festival calendar in Israel, but also announces the message of this festival day: "Our King is coming!"

For me, the most important part of the trumpet day is how he points to Jesus and how Jesus fulfilled this when he first came: through his Incarnation, his work of reconciliation, his death, his resurrection and his ascension. Through these "events in Christ's life", God not only fulfilled his covenant with Israel (the Old Covenant), but changed all the time forever. Jesus is the head of the year - the head or lord of all time, especially because he created time. It is our tabernacle and we have new life in it. Paul wrote: “If someone is in Christ, he is a new creature; the old has passed, see, new has become » (2 Corinthians 5,17).

Jesus is the last Adam. He won where the first Adam had failed. Jesus is our Passover, our unleavened bread and our reconciliation. He is the one (and only one) who removes our sins. Jesus is our Sabbath, in which we find rest from sin. As Lord of all time, he now lives in us and all of our time is sacred because we live the new life we ​​have in communion with him. Jesus, our King and Lord, sounded the trumpet once and for all!

Living in fellowship with Jesus,