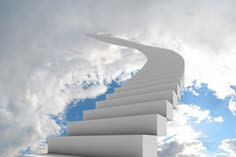 People sometimes take offense at Christian teaching that salvation can be had only through Jesus Christ. In our pluralistic society, tolerance is expected and the concept of religious freedom is expected (which allows all religions) is sometimes misinterpreted in such a way that all religions are somehow equally true. All roads lead to the same God, some claim, as if they had all gone and come back from their destination. They show no tolerance for the checkered people who only believe in one way, and they reject evangelism, for example, as an offensive attempt to change other people's beliefs. But they themselves want to change the beliefs of people who only believe in one way. How is it now - does the Christian gospel really teach that Jesus is the only way to salvation?

Most religions have an exclusive claim. Orthodox Jews claim that they have the true path. The Muslims claim to have the best revelation from God. Hindus believe they are right and Buddhists believe in what they do, which should not surprise us - because they believe it is right. Even the modern pluralists believe that pluralism is more correct than other ideas.
All roads do not lead to the same God. The different religions even describe different gods. The Hindu has many gods and describes salvation as a return to nothingness - certainly a destination other than the Muslim emphasis on monotheism and heavenly rewards. Neither the Muslim nor the Hindu would agree that their path ultimately leads to the same goal. They would fight rather than change, and the Western pluralists would be dismissed as condescending and ignorant, and would be an impetus to those beliefs that the pluralists would not insult. We believe that the Christian Gospel is right while at the same time allowing people to believe it. In our understanding, faith presupposes that people have the freedom not to believe. But while we give people the right to believe according to their decision, that does not mean that we believe that all beliefs are true. Giving other people permission to believe at their discretion does not mean we stop believing that Jesus is the only way to salvation.

Jesus' first disciples tell us that he claimed to be the one and only way to God. He said if you don't follow me you won't be in the kingdom of God (Matthew 7,26: 27). If I reject you, you will not be with me forever (Matthew 10,32: 33). Jesus said that God gave all judgment to the Son so that they all honor the Son as they honor the Father. Whoever does not honor the son does not honor the father who sent him (John 5,22: 23). Jesus claimed that he is the exclusive means of truth and salvation. People who reject him also reject God. I am the light of the world (John 8,12), he said. I am the way and the truth and the life; no one comes to the father except through me. If you have recognized me, you will also recognize my father (John 14,6: 7). People who claim that there are other ways to salvation are wrong, Jesus said.

Peter was equally clear when he said to the leaders of the Jews: ... in no other is salvation, nor is there any other name under heaven given to men by which we shall be saved (Acts 4,12). Paul also made it clear when he said that people who do not know Christ are dead in their transgressions and sins (Ephesians 2,1). They have no hope and, despite their religious beliefs, have no connection to God (V.12). There is only one mediator, he said - only one way to God (1 Timothy 2,5). Jesus was the ransom that everyone needs (1 Timothy 4,10). If there was any other law or way that offered salvation, God would have done it (Galatians 3,21).

Through Christ the world is reconciled to God (Colossians 1,20: 22). Paul was called to preach the gospel among the Gentiles. Her religion, he said, was worthless (Acts 14,15). As it is written in the letter to the Hebrews: Christ is not simply better than other ways, it is effective while other ways are not (Hebrews 10,11). It is a difference between all or nothing, not a difference of relative use. The Christian doctrine of exclusive salvation is based on the statements of Jesus and the teachings of Scripture. This is closely related to who Jesus is and our need for grace. The Bible teaches that Jesus is the Son of God in a unique way. As God in the flesh, he gave his life for our salvation. Jesus prayed for another way, but it didn't exist (Matthew 26,39). Salvation comes to us only through God Himself, who comes into the world of man to suffer for the consequences of sin, to take punishment, to free us from it - as his gift to us.

Most religions teach a form of work as a way to salvation - to speak the right prayers, to do the right things in the hope that this will suffice. They teach that people can be good enough if they work hard enough. But Christianity teaches that we all need mercy because we can not be good enough no matter what we do or how hard we try. It is impossible for both ideas to be true at the same time. Whether we like it or not, the doctrine of grace states that there are no other ways to salvation.

What about people who die without having heard of Jesus? What about the people who were born before the time of Jesus in a land thousands of miles away? Do you have any hope?
Yes, precisely because the Christian gospel is the gospel of grace. People are saved by God's grace, not by saying the name of Jesus or by having special knowledge or formulas. Jesus died for the sins of the whole world, whether people know it or not (2 Corinthians 5,14:1; 2,2 John). His death was an atonement for everyone - in the past, present, future, for the Palestinian as well as for the Bolivian.
We are confident that God will stand by his word when he says he wants everyone to be penalized (2 Peter 3,9). Even though his ways and times are often invisible to us, we still trust him that he loves the people he created.

Jesus clearly said: So God loved the world to give his only begotten son so that all who believe in him are not lost, but have eternal life. For God did not send his son into the world to judge the world, but to save the world through him (John 3,16: 17). We believe that the risen Christ defeated death and therefore even death cannot be a barrier to his ability to lead people to trust him in order to attain salvation. We certainly don't know how and when, but we can trust his word. Therefore, we can believe that in one way or another he will urge anyone who has ever lived to trust him for salvation - be it before they die, at the hour of death, or after they die. If some people in the Last Judgment turn to Christ in faith and ultimately learn what he did for them, he will certainly not reject them.

But no matter when people are saved or how well they understand it, it is only through Christ that they can be saved. Good works accomplished with good intentions will never save anyone, no matter how sincerely people believe that they can be saved if they do their utmost. What it all boils down to in grace and in Jesus' sacrifice is that no amount of good works, religious deeds, will ever save a person. If such a path could have been devised, then God would have done it (Galatians 3,21).

If people have sincerely tried to obtain salvation through works, meditation, scourging, self-sacrifice, or any other human means, they will find that they have no merit in God through their works. Salvation comes by grace and grace only. The Christian Gospel teaches that no one can deserve salvation, and yet it is accessible to all. No matter what religious path a person has been, Christ can save him from it and bring him on his path. He is the only Son of God who offered the only reconciliation sacrifice that every human needs. He is the unique channel of God's grace and salvation. That is what Jesus Himself taught as truth. At the same time, Jesus is the sole and inclusive path, the narrow way and the Savior of the whole world, the only way of salvation, yet accessible to all.

God's grace, which we see most perfectly in Jesus Christ, is exactly what each person needs, and the good news is that it is freely available to all people. It's great news, and it's worth sharing - and that's something worth pondering.