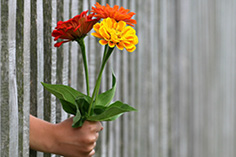 God's love is foolishness. It is not I who make this statement, but the apostle Paul. In his letter to the church in Corinth, Paul writes that he did not come to give a sign to the Jews or wisdom to the Greeks, but to preach about the crucified Jesus. "But we preach Christ, the crucified one, annoyance to the Jews and foolishness to the Gentiles" (1 Corinthians 1,23).

From a human perspective, God's love just doesn't make sense. »Because the word is from the cross. For some it is foolish, for others modern art foolishness for those who are lost » (1 Corinthians 1,18). For those who do not know that the word of the cross is a word of God's love, it is foolish to believe that God saved us through his death. God's love actually seems incomprehensible, inconsistent, foolish, profoundly radical.

From the glory in the dirt

Imagine that you live in perfect perfection. They are the embodiment of unity and connectedness with God. Your life is an expression of love, joy and peace and you choose to radically change it.

I have just described the beginning of creation when the Father, the Son, and the Holy Spirit lived in complete harmony and in total communion with one another. They are a mind, a goal and a passion and their existence is expressed through love, joy and peace.

Then they decide to expand their community by sharing what they are with someone who does not yet exist. So they create humanity and call them children of God. Men and women, you and me, so that we can have a relationship with them in eternity. However, they created us with a reservation. They did not want to decide how we should behave, so that we would live in a relationship with him, but wanted us to choose ourselves for that relationship with them. That's why they gave us their own will to choose ourselves for a relationship with them. Because they gave us this choice, they knew that most people would make a bad decision. That's why they made a plan. No plan B, but the one plan. This plan is that God's Son would become man and God's Son would die as man on the cross for humanity. For most people, this is folly. It is a radical love.

I recently visited a country in Asia where people worship hundreds of deities. Believers spend their entire lives making sure that these gods are well-tuned. They strive to keep these deities in a good mood so that they will not be cursed. They spend their whole lives worried that they are not good enough. The idea that one of their deities would become human and help them out of love is a stupid idea to them.

But God by no means considers it a foolish idea. His decision is based on love, because he loves us so much that he left his glory and became a man in a young, Jewish man: "And the Word became flesh and dwelt among us" (John 1,14). It seems that such behavior from God is foolishness. It is a radical love.

A friend to the sinners

As a human, God lived with fishermen and tax collectors, ordinary people and those who have been expelled from society. He spent his time with lepers, demon-possessed people, and sinners. The religious scholars called him a fool. It is a radical love.

The eighth chapter of John's Gospel is the story of a woman who was caught cheating and brought before Jesus. The religious scholars wanted to have them stoned, but Jesus said that the one who was without guilt should throw the first stone. The group of people gathered for the spectacle disappeared and Jesus, the only one who was truly free from guilt, told her that he did not condemn her and demanded that she no longer sin. This behavior is foolish for many people. It is a radical love.

Jesus was hosted in the house by sinners. The religious scholars said it was foolish to be at table with guilty people because he was not clean and clean. Her sins would affect him and he would become like her. But radical love contradicts this view. Jesus, Son of God and Son of Man at the same time, allowed him to be arrested, tortured and murdered, so that we could be renewed, forgiven and reconciled with God through his past blood. He took all our filth and our folly on us and cleansed us in front of our heavenly Father. It is a radical love.

He was buried and raised from the dead on the third day so that we may have forgiveness, renewal and unity with him, a life full enough. He said to his disciples: "That day you will see that I am in my father and you in me and I in you." (John 14,20). That seems like a foolish statement, but it's radical love, a radical life. Then he ascended to heaven, because he is a God rich in mercy and loved us with his great love, »also us who were dead in sins, brought to life with Christ - by grace you have been saved -; and he raised us up with and put us in heaven in Christ Jesus » (Ephesians 2,4: 6).

When we were still sinners - even before we had the opportunity to recognize and repent of our sins - God welcomed us and loved us.

That's a radical love. Through Jesus, the Son of God, we are part of divine love. God the Father has put us at the side of Jesus and invites us to share in what He does. He encourages us to share this radical love and the radical life that Jesus embodies and that we share through him with others. God's plan is folly for many. It is a plan that bears witness to radical love.

In translation New Life (The Bible) says the following: “Treat each other as Christ exemplified you. Although he was God, he did not insist on his divine rights. He gave up everything; he assumed the low position of a servant and was born as a human being and recognized as such. He humiliated himself and was obedient to death by dying on the cross like a criminal. That is why God lifted him to heaven and gave him a name that is higher than all other names. The knees of all who are in heaven and on earth and under the earth should bow before this name. And for the glory of God the Father, everyone will confess that Jesus Christ is Lord » (Philippians 2,5-11). It is a radical love.

Jesus died for all humanity because of a love that seems foolish. He invited us to share this love, which sometimes seems to make no sense, but helps others to understand the love of God. I would like to give you an example of this radical love. We have a pastor friend in Nepal: Deben Sam. Almost every week Deben goes to the village after the service, where there is a clinic for the poorest of the poor in Kathmandu and where they are treated for free. Deben has built a farm project for the community and orphans nearby, and he preaches the gospel here. Recently, Deben was attacked on the way home, brutally beaten up and accused of bringing false hope to the people in the village. He was accused of provoking a religious contamination - his words were foolish for those who do not know the good news of the Cross.

Deben, who has already recovered from this attack, loves people in a radical way, telling them about the love God is asking us to share with all people, even our enemies. In this way, we give our own lives for the lives of others.

Sharing the good news of the Cross also implies sharing in the experience that this love of Jesus Christ is radical and changing. Christianity is based on this life-giving love of Jesus and his followers. It is a foolish love and sometimes makes no sense humanly. It is a love that we can not understand with our minds, but only with our hearts. It is a radical love.

Easter is about the love of a father for all his children, even those who do not know that they are children of God. The father gave his own son. The son gave his life. He died for all people. He stood up for all the people of the realm of the dead. His love is for everyone - those who know him and those who do not know him yet. It is a radical love.